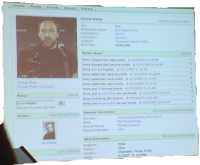 Wikipedia founder Jimmy Wales starting a social network? — A screenshot of the supposed social search engine that Wikipedia founder Jimmy Wales is developing “looked pretty much identical to a Facebook profile page,” says Matthew Buckland. The new project is supposed to be a direct competitor to Google, but suddenly it looks like Wales might be working on something a little different. We don’t think Wales is really building a Facebook competitor, but the project may turn out to be a little closer to human-powered Mahalo, which we today reported is raising $20 million more, than Google.

More details on Google’s mobile plans — The Wall Street Journal has dug up new information about Google’s plans for expanding its mobile services. The company is testing an advanced wireless network at the Googleplex. It is also preparing to bid in the Federal Communication Commission’s wireless spectrum auction in January without any strategic partners, because there are so many conflicting interests between carriers and other technology companies. As the auction could run higher than $4.6 billion, the company may take on debt or equity in order to outbid. It has even hired game-theory specialists to help it plan its auction strategy.

Amazon gets into the e-book game — Despite occasional rumors over the past few months that Amazon.com was developing its own electronic book, some thought the retailing giant wouldn’t risk actually trying to sell e-books. After all, there’s never been a highly profitable e-book on the market, despite endless hype. The technology is getting better, though, and Amazon has an interesting take: WiFi and Sprint-based EVDO wireless internet, email access, and daily subscriptions to the New York Times and Wall Street Journal will be part of the package. The company is also reportedly using its weight as a bookseller to get more publishers on board. The product, called the Kindle, will be unveiled Monday, according to CNET. You can read more of our own coverage on e-books and other flexible displays here and here.

Jeff Bezos aims even higher — The Amazon.com chief executive wants to commercialize space travel. We’re not sure what he’s charging, but we’ll probably need to travel in whatever class Super Saver Shipping goes by.

New York Times traffic shoots up as pay wall goes down — Traffic to the website of the New York Times increased from 14.6 million unique visitors per month to 17.5 million in October, an increase of about 20 percent, according Editor & Publisher (which is owned by measurement firm Nielsen Online). That puts it at almost double the traffic of the next closest paper, USA Today. Given that it’s only the first month, chances are good that the site’s uniques will edge toward 20 million in coming months. Whether the additional advertising revenue will make up for lost subscriptions remains to be seen, but the encouraging traffic numbers can only contribute to the trend of making as much internet content as possible free.

Hulu positioning to be a “premium content” portal — Hulu is the YouTube competitor owned by Fox and NBC. Search for a show from ABC or CBS on Hulu’s site, though, and you’ll still find what you’re looking for, even though displaying competitor’s offerings doesn’t directly benefit Hulu’s corporate masters. It does increase the chances of people switching to Hulu to find TV content on an everyday basis, though, aided by the fact that it only shows professionally. More from Ad Age.

California benefits from status as green leader, says Next 10 — The annual “California Green Innovation Index” by Next 10 reveals that California is the nation’s leader in cleantech and environmental awareness, which is really news to nobody. The report also concludes that green innovation has caused the entire state’s economy to grow, and that consumer adoption of green products is accelerating. To go over their arguments and numbers, read the full report in .pdf form.

PayPal alumni may resemble the mafia — Or maybe that’s just Fortune throwing a bit of hype into the mix, along with a picture of Peter Thiel beside a screen shot from “The Godfather”. Nevertheless, this Fortune article presents a good, if overly admiring, portrait of PayPal’s former executives, including Peter Thiel, Max Levchin and Elon Musk.