Sprint and Clearwire to join forces for WiMax venture — The telecom companies, along with Comcast, Time Warner, Google and Intel, are about to announce a $3.2 billion investment in a new wireless Internet company using WiMax technology, according to the Wall Street Journal. The Journal reports that the new company, which will also be called Clearwire, is valued at more than $12 billion. It will launch two years ahead of competing offerings from AT&T and Verizon. The combination of that head start and the formidable lineup of backers should make this quite a coup for Sprint, which is the driving force behind the partnership.

The result: Everyone wins. The Wimax camp needed some help to counter a competing technology LTE, Clearwire needed some money and the carriers get to split up the financing burden among themselves. Google’s role, though, is new. It’s just the latest move by the Internet search giant to push into the wireless communications arena, and comes as it is pushing it new mobile platform, Android.

Sun previews app platform JavaFX — Sun’s software chief Rich Green gave a demonstration of JavaFX, which should compete with platforms like Adobe AIR for developers of hybrid web-desktop applications, at the JavaOne conference today. Green showed off a JavaFX application that runs Flickr and Twitter feeds in Facebook, then dragged the app onto the desktop. The same application ran on a Java-enabled phone. Rather inauspiciously, CNET reports that the application kept breaking, although the problems were blamed on the venue. The platform is set to launch this fall; I’m hoping more details will emerge about how it’s going to stand out against AIR.

Rocker Neil Young makes collected works available for download — Speaking of Sun, famed musician Neil Young is partnering with the company in an ambitious project to make all of his work available for purchase. Apparently, the content will be delivered on Blu-ray discs that check for and download new content as it becomes available. Young says the Playstation 3 is the best device for downloading all that music. This sounds very cool, although I’m not sure that it’ll lead to quite as many PS3 sales as the new Grand Theft Auto game.

Microsoft’s media player Zune gets TV shows — For all you Zune owners who have been jealously eyeing those with iPods and wondering, “When will I be able to watch Battlestar Galactica on a tiny, portable screen?” the long nightmare is over.

Cisco revenue up 10 percent in Q3 — That’s an increase from $8.9 billion to $9.8 billion. Since the company, which is the largest maker of networking equipment, is seen as a bellwether for the larger tech industry, that’s a bit of a relief, and particularly impressive after Sun recently reported a loss during the same period and blamed the weakening economy. Cisco’s profit, on the other hand, fell due to acquisition-related charges, and sales are expected to grow more slowly than previously anticipated. 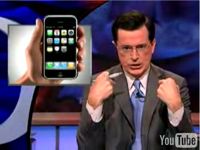 Stephen Colbert is the Person of the Year (on the Internet) — The political comedian will be recognized as part of the 12th Annual Webby Awards next month. Colbert’s mockery of Internet trends has led to everything from Wikipedia vandalism to possibly the largest Facebook group in history. Which is enough to make him an online pioneer, at least in the eyes of the International Academy of Digital Arts and Sciences.