Sprint doubles bet on WiMAX –- Sprint doubles its investment pledge on the untested WiMAX technology (WSJ, subscription required), which Sprint will use to provide widespread broadband over its network. It now plans to spend $5 billion by 2010. 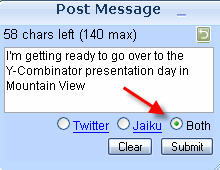 Twitku, the Meebo for twittering — Twitku is a new service that lets you post a single message about what you’re doing simultaneously to Twitter and Jaiku. Those two services are rivals in letting people send one-line messages to their friends, and some people have become torn about which one to use. So Twitku lets them avoid the problem. Like Meebo does for instant messaging, Twitku brings your accounts into a single screen.

Meebo now tailored for the iPhone — The popular online instant messaging company has finally unveiling a version designed for the iPhone. Other IM startups, such as Heysan!, were iPhone-compatible when the iPhone launched and saw traffic surge. Since launch, IM companies of all shapes have introduced their own iPhone-compatible versions. One that we’ve covered is FlickIM, which boasted at the time it was better than the then-existing Meebo on the iPhone. Meebo is one of the most used instant messaging services in the world. Like the Facebook app for the iPhone, this move was predictable.

VMware’s $750 million mistake — While everyone was getting suckered into raving about VMware‘s whopping IPO Tuesday, few people stood back and realized what the company’s robust stock rise (from $22 to $51 in the first day) really meant. Essentially, the company flittered away about $750 million to investors who had nothing to do with the company’s success. Had it sold its stock at a higher price, say $45, it would have doubled its proceeds, and still given initial investors a decent incentive to buy the stock. Press accounts marveled at the stock’s rise, but hey, had the company priced its stock at $10, it could have seen a five-fold increase, and gotten even better press coverage! Great press, but completely destitute. What it should have done was use the open-IPO process that prices stock at market rates to begin with, which is what Google did. Investment bankers hate it. But its better for the companies. (Thanks to Techdirt, for the reminder).

Final nail in Bolt Media coffin — Bolt Media, the video site that launched in 1999, absorbed more than $60 million in venture backing, precariously survived the burst of the Internet bubble in 2000, slaved through the dark years of 2001-2003, travailed through a management buyout in 2004, and then almost got sold in February to GoFish, has finally met its end. The acquisition didn’t go through, because of Bolt’s myriad of lawsuits, giving it no other option than to fold.

Reporters sue HP — Three reporters for CNET Networks sue Hewlett-Packard, accusing the company of violating their privacy in its hunt for the source of boardroom leaks.