Twestival: Bad name, good cause — Tomorrow, over 175 cities around the world will host Twitter festivals (really, meetups), or Twestivals, to raise money and awareness for charity:water, a project aimed at giving some 1.1 billion people on the planet access to clean drinking water. To find an event near you, visit the Twestival site. If you can’t go to one, Magnify.net is powering a live video stream found here, and you can donate online.

Palm talks Pre and patents — Chief executive Ed Colligan offered some new details about Palm, namely that the PalmOS is dead (the Pre will run the webOS), you’ll be able to use apps from outside its app store and that the Pre may come to other carriers besides Sprint in 2010. But that’s all secondary. What everyone really wants to know is, when is the Apple lawsuit coming? Well, Colligan says there is currently no legal action pending with Apple and that Palm has over 15 years’ worth of patents itself, some 1,500 of them. Patent fight! PreCentral.net has more.

Google pays up to out-of-print authors — As part of its Google Book Search settlement, Google is paying authors of books that appear on the site that are out-of-print up to $60 per scanned book. TechCrunch has more. 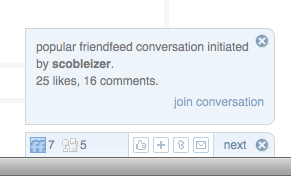 Feedly makes Twitter and FriendFeed conversations easier — The service, which creates a personalized newspaper-style homepage based on your feed items in Google Reader, has just added the Feedly Mini to its Firefox extension. Basically, this allows you to visit any page on the web and see if that page is the center of a conversation on FriendFeed, if people have dugg it on Digg, or if people are sharing it on Google Reader. If you found the page via Twitter, it will also let you easily re-tweet the link out or respond to the tweet that brought you there. The Feedly blog has more, as does Scobleizer.

Blockbuster to start renting videogames through the mail — The move is clearly meant to get Blockbuster back into the race with Netflix for rentals through the mail. The problem is, Netflix is already clearly starting to move on to the next step — movies served over the Internet — and having success. Blockbuster also came to that party late, and once again doesn’t appear to be having success. Game rentals is an interesting move by Blockbuster to try to quickly lure new customers, but will it save the company in the long run? No. The Wall Street Journal has more. 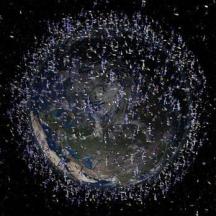 When satellites collide — The collision between one Russian and one U.S. satellite took place 500 miles above Siberia. The American one was run by Iridium, a company that provides phone and paging service to workers on offshore oil platforms, according to USA Today. No word on if this will reignite the Cold War.