Wikileaks judge restores site, slaps self on wrist — A federal judge who ordered that whistle-blower site Wikileaks be scrubbed from the web not only reversed his own order, but has since released a statement suggesting that he overstepped his bounds and possibly violated the First Amendment, acknowledging that free speech on the Internet is a tricky issue.

Chevron and Weyerhaeuser join forces for cellulosic ethanol — Ain’t green great? Take Chevron and Weyerhaeuser, two giant companies known for environmental damage — the first for oil exploration, the latter for logging and creating Superfund sites — add an impending global crisis, and come up with Catchlight Energy, a new joint venture to research cellulosic ethanol. The company will employ up to 40 researchers, making it one of the larger cellulosic efforts.

Saudi Arabia and IBM partner to develop green nanotech — Meanwhile, Saudi Arabia is keeping up with the Joneses by setting up its own nanotech research lab, which will put most of its efforts toward solar energy. The Jones here, in case you missed it, is Abu Dhabi with its $15 billion Masdar City initiative.

Akamai prevails in patent fight, but unhappy with the winnings — Akamai won a patent battle with rival content distribution network Limelight, but the amount — $45 million — was less than half of the $100 million the company thought it deserved, according to Xconomy. Limelight, for its part, would prefer to multiply the amount by 0; it’s appealing the case. 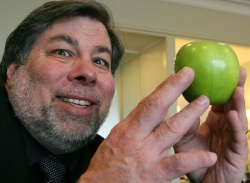 Woz points out the flaws with latest Apple products — Acting as the super-ego to the ego of Steve Jobs, Steve Wozniak spent some time criticizing the Apple Air and iPhone to the Sydney Morning Herald. (The id, we’ll assume, is represented by Apple fanboys.) The brief version: He thinks that some fairly vital features were unnecessarily left out of the two devices.

Global warming, now with double the lethality — According to a study cited by the New Scientist: “A rise in CO2 increases the temperature and water vapour content of the atmosphere, which in turn accelerate ozone production and encourage particulates to hang around in the air.” That means more lung damage, and ultimately, more deaths.

Fortune ranks “Most Admired” companies, tech firms top list — Apple is number one and Google is number four on Fortune’s new list of the 20 most admired companies, which doubles as a clever way for Fortune to get 20 pageviews from a single article.