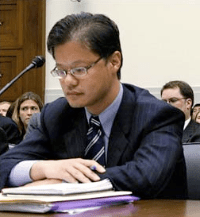 Yahoo’s Yang lambasted by Congress for China actions — When a Yahoo lawyer testified to Congress last year that the company hadn’t played an active role in the jailing of Chinese dissidents, the issue was allowed to blow over. Then an organization called Dui Hua dug up the actual documents served to Yahoo China by Chinese police. It’s pretty clear now that Yahoo did know what was going on, and Congressional leaders aren’t happy about it. CEO Jerry Yang and general counsel Michael Callahan were yesterday called “moral pygmies” during hearings in front of the House Foreign Affairs Committee. That committee is also urging a bill that would criminalize cooperation by US companies with anti-democratic governments, a significant threat to internet companies looking to expand in Asia. More from the WSJ here (image courtesy of Getty Images).

Social networks eclipse email in the UK — A Hitwise study shows that social networks are now receiving more traffic than web-based email services like Hotmail and Gmail in the United Kingdom. That’s mostly due to strong growth in the traffic of social networks, but there has also been a modest decline in traffic to email sites. Predictably enough, the surge toward Facebook and similar sites is led by users aged 18-34, with the fogeys opting for the more familiar web mail.

Yet another “semantic” search engine launches — TrueKnowledge may or may not be worth its weight in 0’s and 1’s, but it at least has the gamut of buzzwords: Natural language processing, semantic search, internal knowledge bases, etc. Unfortunately, the UK-based company isn’t allowing anyone to touch the goods, including ReadWriteWeb, which has a review and video of the site here.

Coming to a gas station pump near you: Google maps — The Internet-connected gas pumps, made by Greensboro, N.C.-based Gilbarco Veeder-Root, will display the maps to help drivers find local destinations. Notably, the destinations will be hand-picked by pump owners and won’t include a way, for the time being, for people to type in addresses and get directions. Google Maps is also available for mobile phones, specifically so you can get directions. At this time, the maps won’t include ads. AP story here.

Coming to online games this year: Google ads — Google will start beta-testing with casual gaming startup BunchBall Games later this month, embedding 15-second video-style ads that appear before and within some of Bunchball’s games. It will offer PC-based ads in December, starting with cult-classic game Psychonauts. Om has the scoop, here. Bunchball is also a member of OpenSocial.

About every three months this year there has been a mobile Linux initiative of some sort launched. It’s a bit like the common cold. It keeps coming round and then we go back to business. We don’t participate in these full stop. We make our own platform and we are focused on driving that into the mobile phone market at large ever more aggressively.

Symbian sold software licenses for 20.4 million smartphones in the last quarter of 2007.