Plenty of moves by big companies in today’s action:

Yahoo expands stake in Chinese search portal Alibaba — As China’s Alibaba.com prepares to go public next week, Yahoo has invested another $100 million into the company, raising its overall ownership stake to about half. The latest investment represents about 10 percent of the company; Yahoo already owned about 39 percent. The move reflects a growing realization by both Google and Yahoo that the Chinese search market is culturally different enough to make competition against entrenched local sites difficult.

Yahoo has also bet on Baidu.com, which went public in August 2005. Baidu is the largest search portal in China. It has captured enough market share to rank third overall in the world market, according to a comScore study. Alibaba, which folded Yahoo China into its site under the original deal, is China’s second largest search engine.

AT&T picks up spectrum from Aloha Partners — A $2.5 billion deal by AT&T will deliver 12 megahertz of spectrum in the lower end of the 700 mhz range to the telecom giant. The seller was Aloha Partners LP, parent of mobile TV company HiWire. The 700 mhz spectrum is important to AT&T’s plans for mobile video offerings: The 700 mhz spectrum is particularly effective for long range transmission, and penetrates walls and other obstacles more easily than other wavelengths. The acquisition also helps hedge AT&T’s bets, in case a rival like Google wins the FCC auctions for other parts of the spectrum. However, the news may not be the best for entrepreneurs: AT&T is not known for being open to innovation, and its dominance over mobile TV might spell slow growth for the market.

As a result, and in order to protect other developers and us from claims that we or anyone else copied material without the creator’s permission, unless we agree otherwise in writing, we can’t promise that any materials or information you submit here will be kept confidential, or specifically that we or others might not develop similar or identical products or services.

You can apply here. 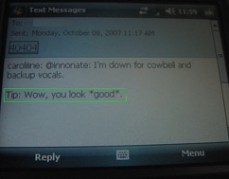 Twitter appears to be gearing up mobile ad unit — Some users, including CNET’s Caroline McCarthy, have noticed text ads slipping into Twitter’s mobile notifications. The text “tips” take the form of small, single-line advertisements slipped in between posts by users. The news of the new ads comes just as Jaiku announces its acquisition by Google (our coverage). it appears that Twitter may intend to remain independent, gearing up to protect its position and begin monetizing the service.

More on Google’s plans for Orkut, social networking — Google has been rumbling for months with secret plans to introduce more interesting social networking features across its web properties. Now, more specifics are leaking out. A Businessweek article yesterday confirms an earlier report that Google will be introducing a number of new features on November 5th. The article suggests, for example, that Google may let third party developers run applications for Orkut from their own servers — applications that also let developers provide Orkut data within other social networks.

E.ON lays down big bucks for wind power — Despite criticisms of wind turbines, including problems with their low output and unattractive appearance, it appears that investments in wind are paying off. Two big European players who both have operations in the United States made a $1.4 billion swap, with Ireland-based Airtricity trading off its US subsidiary to Germany’s E.ON. The acquisition adds 210 megawatts to E.ON’s total wind production, which will now be about 850 MW, with another 4.6 gigawatts still in production. Government subsidies have made the US market one of the world’s most attractive for wind power, with an expected growth of about 10 percent per year, and the field is wide open for entrepreneurs: Growth would be even higher, but production of the actual turbines used to generate wind power has not yet scaled to meet market demand.

Vlaze, an internet TV site and social network, shows impressive growth — If you combine social networking features with live shows that broadcast 14 hours every weekday, you might go from 10,000 unique visitors a year ago to more than 8 million last month. Well, at least if you’re Vlaze, the site formerly known as MusicPlusTV. The Los Angeles company is no longer just focusing on music-related content, but it compares itself to “MTV back in the old days,” back when MTV had more music and less lame reality TV shows. Vlaze shoots its videos in a huge studio in LA, but lets users contribute their own footage as well.