Here’s the latest action:
1) For entrepreneurs: Zlango and the art of the PowerPoint pitch
2) DIY widget makers help you create your own Facebook applications, sell ads
3) Compete suggest smaller video sites are eating up market share
4) Do buyouts, young man, not venture capital

For entrepreneurs: Zlango and the art of the PowerPoint pitch — Zlango launched an icon-based language last year that it hoped would replace text messages as a faster, more intuitive way to communicate with friends.

A source slipped us the original Powerpoint presentation (download here) the company used to raise a first round of capital from Benchmark Capital and Accel Partners, and it’s an eye-opener. The slide below is an example of the crude language used, and it gets worse. We’re surprised this wasn’t enough to deter the VCs. But the Israel-based company happily landed $12 million earlier this year. 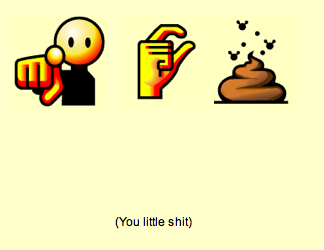 However, the icons apparently weren’t as intuitive as the company hoped. The company hit the news this week as it announced a couple of new services, one of them a “composer” to help you understand what the icons are supposed to mean. It lets you pick and choose from Zlango’s hundreds of icons, helpfully showing you the word an icon is supposed to represent. This sort of defeats the purpose of what was supposed to be an intuition-based language. Another of the company’s new features is called “zMess,” a Twitter-like micro-blog where you can quickly leave messages for your friends or the public.

The site has gotten somewhat positive reviews from Techcrunch and CenterNetworks; however, for a vulgar dash of reality, check out the hype-busting Uncov.

DIY widget makers help you create your own Facebook applications, sells ads — Widgetbox and Dapper both introduced new ways to easily create Facebook apps this week, proving simultaneously how easy it can be for anyone to create an app and how hard it is to create a distinctly interesting app. 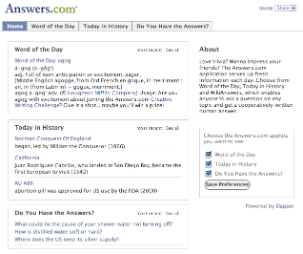 Dapper lets you choose content from across the web and display it in a widget, useful for syndicating content (see the Answers.com Facebook app produced using Dapper). You can choose to pull in web data in various formats, including XML, RSS feeds, RSS feeds that you filter for based on particular keywords, HTML, even email. We created a Dapper app in a few minutes that pulled in all of VentureBeat’s stories. The Israeli company separately introduced Dapperads, which lets you create a widget that automatically displays contextually relevant ads from Amazon next to topics you choose within your web site.

San Francisco-based Widgetbox, another company that helps you easily create your own widgets (our coverage), released a tool this week called App Accelerator for turning those widgets into Facebook applications. It also announced a deal with widget creator and widget ad network RockYou — one of the largest widget companies — whereby people who have Widgetbox widgets on Facebook can run RockYou’s Facebook ads (our coverage) and keep 50% of the revenue.

Forget venture capital, young man, try buyouts — Remember the horde of MBAs that headed to the valley to enter venture capital firms during the last boom? That’s not happening this time, despite the robust financings we’re seeing. MBAs are headed instead to “private equity,” and “buy out” firms. Compensation in buyout firms, including salary, bonus and carried interest distributions, rose to $359,000 for the median professional, or 21 percent more than last year. That’s according to the Private Equity Analyst-Holt Compensation Study. Venture capitalists made $350,000, or 17 percent more than last year. The study pointed out that venture firm professionals are more senior than those in the buyout world, where you’re seeing the influx of younger guys. Even then, the buyout folks are making more. Venture and buyout firms are the primary destination for graduates from top MBA programs. At Stanford, some 12 percent of the graduating business school class are heading for these firms. However, venture firms are shriveling, while buyout firms have expanded — meaning most jobs are in buyouts. How long that will last is another question.