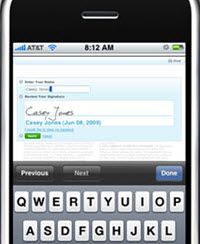 Sunday night, Adobe announced that it had acquired EchoSign, a startup that provides electronic signatures. This morning, the two companies are getting hit with a patent lawsuit.

RPost, another electronic signature startup, has filed suit against Adobe and EchoSign for violating five patents.

The timing isn’t surprising in one sense: Adobe has much bigger pockets than EchoSign.

The lawsuit was filed in federal court in Texas. Los Angeles-based RPost asked the court to issue an injunction against Adobe to stop it from using the technology. RPost says it invented its own electronic signature and registered email services that can provide legally valid signatures with email verification and time stamps.

We’ve contacted EchoSign and Adobe for comment and will update here when we hear from them.

EchoSign plans to integrate its signature technology into Adobe’s document exchange services platform to ensure secure delivery of documents for universal access, review and approval. If this kind of technology takes off, it could finally kill the fax machine and paper contracts.

Adobe will integrate EchoSign’s solution with Adobe’s document services including SendNow for managed file transfer, FormsCentral for form creation, and CreatePDF for online PDF creation. EchoSign has more than 30,000 customers and 2.5 million users. The company says it takes an average of 42 minutes to get a signature through its process, in contrast to a much longer time for paper documents. About $500 million in contracts are signed each month and 97 percent of its customers recommend it.

RPost was founded in 2000 and it describes itself as a pioneer in the e-signature market.

“Electronically signing a document is not difficult,” said Zafar Khan, CEO of RPost, in a statement. “Just typing your name at the bottom of a document or email can have all the legal force of a handwritten signature if all parties have proof that you are the author of the specific content. But if you don’t have that proof, then electronic signing is legally worthless.”

He added, “The key element in any system of electronic signature is creating a legally meaningful audit trial of every step of the signature process and associating that audit trail with particular electronic document content. When part of that audit trail involves email, it is on our turf: we pioneered the technology for proof of email and document delivery, including recording recipient reply or signoff on the message content, and have the patents to prove it.”

RPost said several would-be competitors have already been forced to shut down operations. RPost currently has lawsuits pending against rivals such as Docusign, the Swiss Post Office, the Canadian Post Office and the United States Postal Service. RPost says it has 35 patents dating back to 1995, and it has filed those patents in a bunch of countries. It says its services are being used in every country in the world, with customers including the U.S. government.