Nearly two years ago, I wrote my review for the RTX 2080 Ti and RTX 2080. My takeaway was that Nvidia was pulling the “fake it ’til you make it” routine as part of an effort to shove gaming graphics toward a real-time ray-tracing future. Now, with the RTX 3080, that seems like the right move because RTX has fully arrived.

The Nvidia GeForce RTX 3080 video card is launching this week for $700. It’s a high-end GPU with a focus on ray tracing, but it’s also a beast for traditional rasterized rendering techniques as well. What’s more important is that Nvidia has used the last two years to push past the growing pains of moving to a new rendering technology. And that makes the RTX 3080 — and likely the entire 30-series — feel like the right time to make an upgrade for anyone who was waiting.

I tested the RTX 3080 with the following system:

Nvidia’s Turing architecture — which its last-generation cards ran on — felt like the result of tradeoffs. Even the $1,200 RTX 2080 Ti came with compromises. You can run 4K on that card, or you can run ray tracing, but if you want both, you’ll probably have to sacrifice framerate. And even when you cut back, the 2080 Ti could still struggle to hit 60 frames per second at 4K (4K60) or with intense ray-tracing effects. The RTX 3080 makes that sense of compromise disappear. Modern graphical showcases like Control run at 4K60 with ease. It even runs relatively well at 4K with RTX turned up to max, which is not really a playable option on the 2080 Ti or 2080 Super. But then DLSS is better than ever.

Nvidia’s Deep Learning Supersampling (DLSS) is a machine-learning image reconstruction algorithm. It essentially makes games run faster without sacrificing image quality. And this technology was something that didn’t fully function when it debuted alongside the 20-series, but now it’s in its prime.

Turning on DLSS is no longer a debate. If the option is there, you should use it. It rarely looks worse than native resolutions, and it often looks better. And when it works together with the power of the RTX 3080, it feels like the future.

The RTX 3080 has a new flow-through air design to keep its superpowered components cool, and that works. The card is noticeably quieter than the RTX 2080 Ti, and I struggled to find a torture test that would drive the 3080 over 80 degrees Celsius.

The 3080 does use more power, though. It’s definitely more power efficient when it comes to per-watt performance — something Nvidia emphasizes. But its total draw power is often 10% more than the 2080 Ti under load. 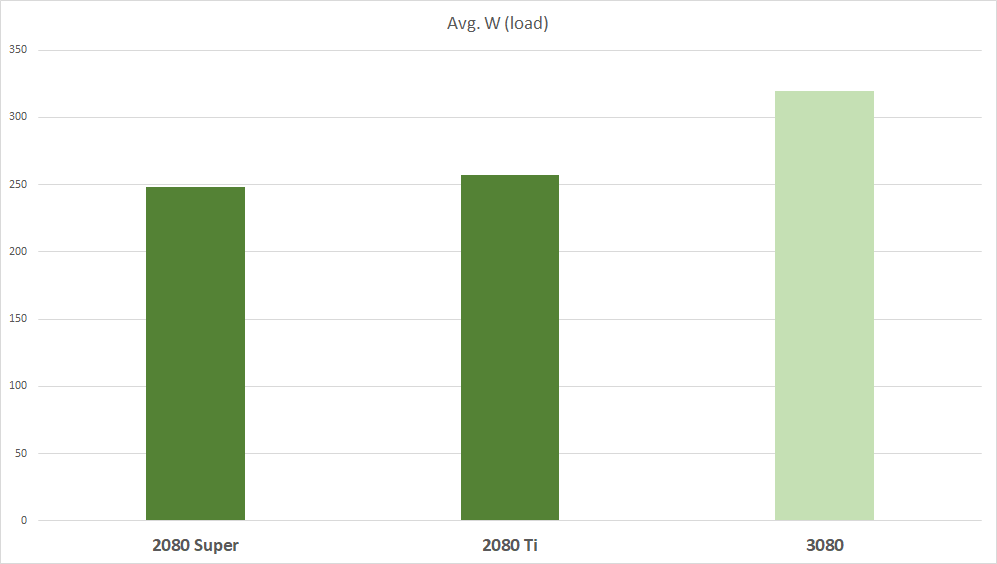 Above: The average power consumption for the RTX cards.

A reason to upgrade

“To all my Pascal friends out there, it’s now safe to upgrade,” the CEO said.

Pascal refers to the generation just prior to Turing. It’s the architecture that Nvidia built the GTX 10-series cards on. And the thing about Pascal is that it was so good that it almost felt like we had reached the end of graphics. And, to a certain extent, we had.

The problem with that for Nvidia is that selling those more powerful cards was contingent on people adopting new displays. And that is something that can take time. If you buy a monitor, you typically treat it like an oven or refrigerator and continue using it for the better part of a decade or more.

So Nvidia changed its tactic with the RTX cards with the purpose of essentially resetting performance. Real-time ray tracing is the future of computer graphics, but it’s so computationally expensive that it makes a 1080 Ti feel 15 years old.

And that was the point. Nvidia pursued ray tracing when it did to continue pushing forward with its planned obsolescence. If it hadn’t, there probably would still be no reason to upgrade from the 1080 Ti.

But two years on, ray tracing is here, and it works. And Nvidia has solved all of its headaches. You’ve also had a few extra years to upgrade your display beyond 1080p60.