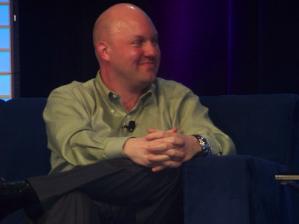 One obvious question here — and I have an email out to Andreessen for comment — is that Ning’s do-it-yourself social network creator tool is based on the opposite premise from Facebook. Otherwise, as Swisher points out, the two are a nice fit.

Vision-wise, Palo Alto, Calif.-based Facebook is trying to get you, your friends and everyone else to use its site. It grows through network effects, where one friend invites their friends to join — and this invite process continues, the company hopes, until the whole world is on it. Its “social graph” of relationships between its millions of users and information about them is being used by Facebook to launch new features, like “People You May Know” where Facebook recommends users add each other as friends based on friends and other things you have in common. It is this network of relationships that allow third party applications on the site to grow quickly and engage, in some cases, millions of users.

On the flip side, also-Palo-Alto, Calif-based Ning (which has just raised $60 million ) wants anyone create their own social network — each social network is typically completely disconnected from the others, except for basic features like giving a user a Ning ID that they can use across Ning-based networks.

If Swisher is correct, then I have to wonder if there is going to be any sort of relationship that emerges between the two companies. Facebook is looking at ways its users (and developers) can put Facebook data on other sites. Maybe we’ll see a way to create a Ning network based only on your Facebook friends from college? All of this is speculation, and anyway, Andreessen and Facebook have yet to confirm the move.

And if it’s an issue of personality, here’s why Swisher thinks the two are a good fit: She thinks they’re each the “Golden Geek” of their generations. In fact, she originally thought Andreessen would make a great chief operating officer for the company when it was looking for a new one, several months back.

From their arrogant innocence to their visionary qualities to their enfant-terrible charm, it is almost as if [Zuckerberg and Andreessen] were separated at birth. But now Andreessen is all grown up and much, much matured from when I covered him. He has become all calm and sage and he even does a very decent blog. Plus, he has also started and run a number of start-ups after Netscape, giving him deeper managerial experience over the last dozen years. And, best of all, Andreessen knows the pressure of being the best-thing-since-sliced-bread in the tech sector, and its inevitable downside too. Overall, a real mentor and partner for Zuckerberg, making a perfect pair of Golden Geeks.

Facebook’s board is currently comprised of Zuckerberg (who owns the single largest amount of Facebook equity), the company’s first investor and hedge fund manager Peter Thiel and Accel Partner’s Jim Breyer. Greylock Partner David Sze also has observer status on the board.

For more on Andreessen and Ning, check out our coverage of when he spoke at the Web 2.0 Expo last month (pictured).