Perennially popular fitness-tracking app RunKeeper is introducing support for Spotify today, meaning runners, walkers, and cyclists can listen to tunes from the music-streaming service while they use the app.

RunKeeper says Spotify integration has been “hands-down” one of its most requested features for years.

Spotify is really starting to ramp up its integrations with big-brand third-party platforms. Just yesterday, it announced an exclusive partnership with Sony that will see it power a new PlayStation Music service coming this spring. And back in November, Spotify teamed up with Uber to let passengers control the music while in an Uber car.

With 38 million users, RunKeeper is one of the most popular GPS fitness-tracking apps, so this is a big win for Spotify. You will, of course, require a Premium Spotify subscription — which costs $10 per month — to use this feature. And in return, Spotify will also deliver some fitness-focused playlists to remove the hassle of building your own.

Spotify is pushing hard to grow beyond 15 million paying subscribers, 25 percent of its user base, so RunKeeper integration is one more reason for a would-be subscriber to sign up.

While you could already listen to Spotify, Pandora, and other third-party music apps in the background while using RunKeeper, today’s news brings Spotify inside the RunKeeper app itself, meaning you can open playlists directly from within. 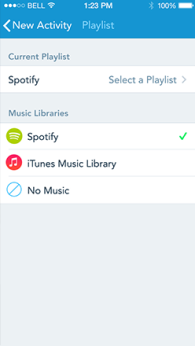 This now means you can control both your locally-stored iTunes catalog and your cloud-based Spotify library without switching between apps.

The bad news is that, for now at least, the integration is restricted to the iPhone app, which is usually the case for new RunKeeper updates. But it should be arriving on Android eventually.

RunKeeper isn’t the first GPS fitness-tracking app to integrate with Spotify. Runtastic has supported Spotify for a while, though only within its Android app — and that integration feels much more like a “shortcut” between the two apps than anything else.

RunKeeper feels a lot more deeply integrated, and the Boston-based company says it will work with Spotify to “look at all the ways fitness data can power a more personalized music experience, and vice versa.”

While no more specifics have been given, a number of potential benefits to this partnership come to mind. For example, Spotify could tailor playlists to suit an individual’s level of exercise. For example, if a runner is slowing down because they’ve hit a hill or have been running for hours, the music could change to reflect that.

Spotify also has music intelligence company The Echo Nest under its wing following its acquisition last year, and that is another tie-up that could help tailor music for RunKeeper users.