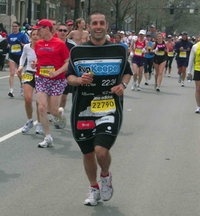 RunKeeper, a small startup that makes a run- and workout-tracking platform, has raised an impressive $10 million second round of funding.

The money will give the company a shot at its greatest ambition: Becoming a widely-used platform for measuring, tracking and reporting a variety of health and fitness data, including exercise, nutrition, sleep and other factors.

The company started out making an iPhone app that tracks runs, using the GPS built into the phone to log where you run, how fast, and to estimate how many calories you’re burning. It later added Android, Windows Phone 7 and Symbian versions of the app. At the same time, the company built out reporting and graphing tools on its website. (I’ve been a customer of RunKeeper for several years, using it to log my runs, swims, and occasionally my ride to work.)

In June, RunKeeper decided that the best way to compete against the numerous other fitness-tracking services, like MapMyRun and Nike+, was to make itself into an extensible platform. RunKeeper’s Health Graph opened up RunKeeper’s API to outside developers, enabling it to work with other mobile apps, as well as additional devices, such as the Zeo sleep-tracking device and Polar heart-rate monitors.

Developers have now integrated RunKeeper with more than 40 different apps or devices, and several hundred are in the works, according to CEO and cofounder Jason Jacobs, who somehow manages to log long runs even though he’s running a startup.

“It isn’t just apps/devices sending us health info, it is also companies building on top of all of this aggregated health data, such as corporate wellness platforms like Limeade, fitness rewards platforms like Earndit, and fitness games like Fitocracy,” Jacobs said in an emailed statement.

“The early success of the Health Graph has showed us that the world is ready for someone to step up and build a consumer health platform that ties together all of this disparate health information across categories. It also showed us just how much work is left to be done to make this vision a reality.”

“We hope that this financing round sends a message that the world is ready for a breakout consumer health platform to emerge, and that we are the one to bet on,” Jacobs said.