It’s no surprise that Pavel Durov is not a big fan of governments. The Russian entrepreneur has been essentially exiled from his homeland after refusing government requests for access to his users’ information.

He’s also likely feeling a bit of tension these days, given the unwanted attention being directed at the ultra-secure messaging app, called Telegram, that he helped fund and create.

In the wake of the Paris attacks last week, Berlin-based Telegram, which uses sophisticated encryption to protect privacy and prevent government snooping, has been scrambling to shut down all the communication channels created by people or groups related to ISIS.

So far the company has nixed 78 of these channels, but it looks like ISIS just keeps on creating more, according to Reuters, which first reported on the groups’ widespread use of Telegram.

In the middle of all this, Durov took to Instagram and Facebook this week to both offer his condolences to the victims and explain who he felt was really to blame.

“I think the French government is as responsible as ISIS for this, because it is their policies and carelessness which eventually led to the tragedy,” he wrote, next to a picture of himself with the Eiffel Tower in the background. “They take money away from hardworking people of France with outrageously high taxes and spend them on waging useless wars in the Middle East and on creating parasitic social paradise for North African immigrants.” 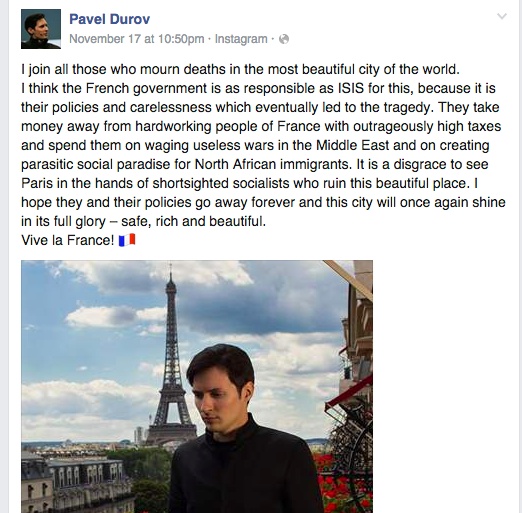 As you can imagine, some folks took issue with his interpretation of events.

“You don’t understand France, you don’t love France, and in your comments you’re insulting French people (in a horribly bad timing) whatever their political directions are,” read one comment on Facebook.

“I am French and let me tell you, you’re the best, most on point and truthful message I have read since the attacks and from a ‘mainstream’ figure,” read another comment.