I hope you like fast CPUs because AMD’s new Zen 2 architecture is absolutely blazing. The company is launching its new lineup of chips based on Zen 2, and I’ve spent the last few days testing out the $500 Ryzen 9 3900X. At that price, the CPU directly competes with Intel’s $500 i9-9900K. But where the 9900K has 8 cores and 16 threads, AMD’s new part has 12 cores and 24 threads. And it’s also using the 7nm manufacturing process, which makes it run cooler and more efficient.

So should Intel worry? Definitely. The i9-9900K is a great part. And it still lives up to Intel’s claim as “the best gaming CPU.” But its advantage in gaming is tiny — especially at higher resolutions. And in just about every other task, the 3900X has a huge advantage.

Let’s dig into the review.

We’re going to focus on the comparison between the 9900K and the 3900X, but I’ll also include the $330 Ryzen 7 3700X. And since Intel is planning to soon launch the i9-9900KS (which runs at 5.0 GHz on all cores), I’m also going to emulate that by running an overclocked 9900K at 5.0 GHz. This faux “i9-9900KS is just for crude performance comparisons, and it should not be taken as more than that. Everything else is running stocked.

Here are the test rigs I used:

To test productivity performance, I run each CPU through a combination of tests. For these types of applications, lots of cores and lots of threads make a difference. And it turns out that 12 is more than 8, so the 3900X’s 12 cores and 24 threads dominates in nearly ever category.

PassMark is a synthetic benchmark tool. I like it, but as with any test, it isn’t indicative of performance in all situations. As you can see that 3900X has a significant lead over everything else. But the 3700X even does better than the overclocked i9-9900K that is standing in for the upcoming “9900KS.”

This doesn’t reflect gaming, but this chart is an overall approximation of how the CPUs will perform in the other productivity tests that I’m going to run. 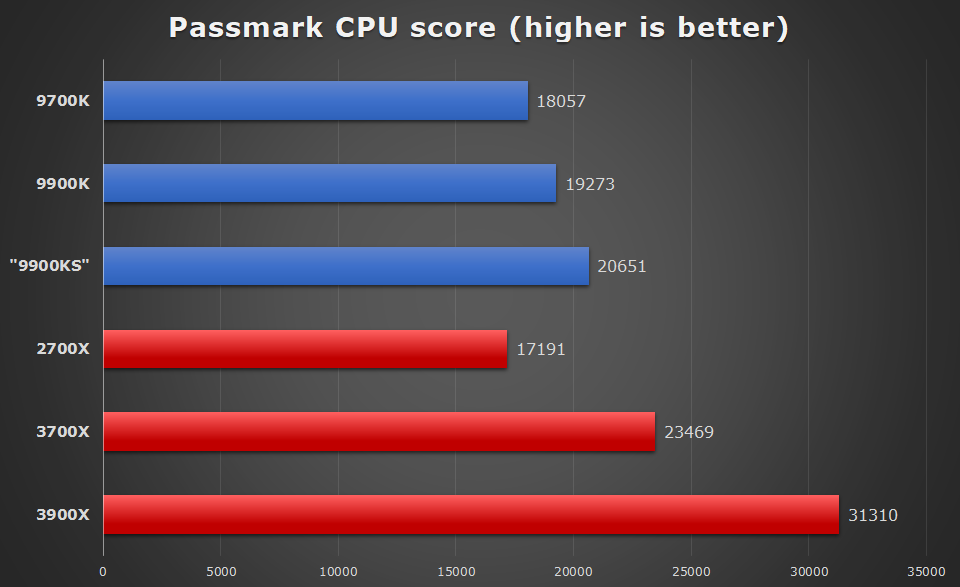 This is where you can see the huge benefits of AMD’s new architecture. In this Handbrake test, the 2700X falls behind the 9900K despite having the same number of cores and threads. Intel’s clock speeds were higher and capable of more instructions per second. AMD has more than caught up here, though. The 3700X, with the same number of cores and threads, is now significantly faster. So obviously, the 3900X is just a monster with its 24 threads working on the task.

I’m using the RealBench Handbrake encoding test, which includes a numerical score and seconds. I’m going with the score for this chart because it’s more indicative of the difference in performance you get for larger projects. 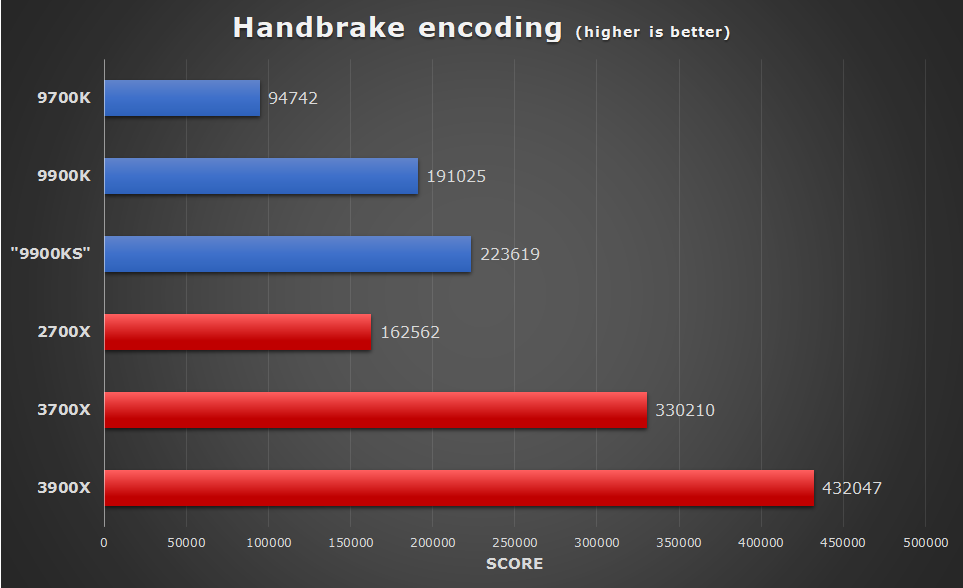 Ryzen is also a beast for taking on more than one application at once. You can potentially encode a video and still browse the internet and watch a 4K video at the same time. Again, the 9900K had an advantage in this over the 2700X, but the 3700X has leapfrogged Intel, and the 3900X nearly doubles the performance of Intel’s i9. 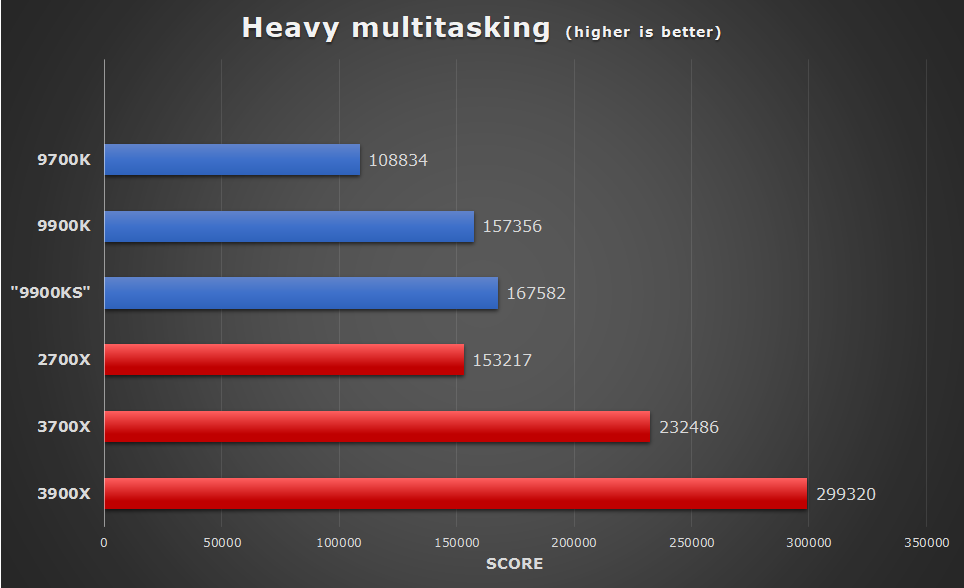 CineBench is getting a reputation as an unfair synthetic benchmark because it’s not indicative of all performance, but … that’s true of every test. Don’t take it as illustrative of gaming performance, but it’s still a good indicator of the raw capability of each chip. 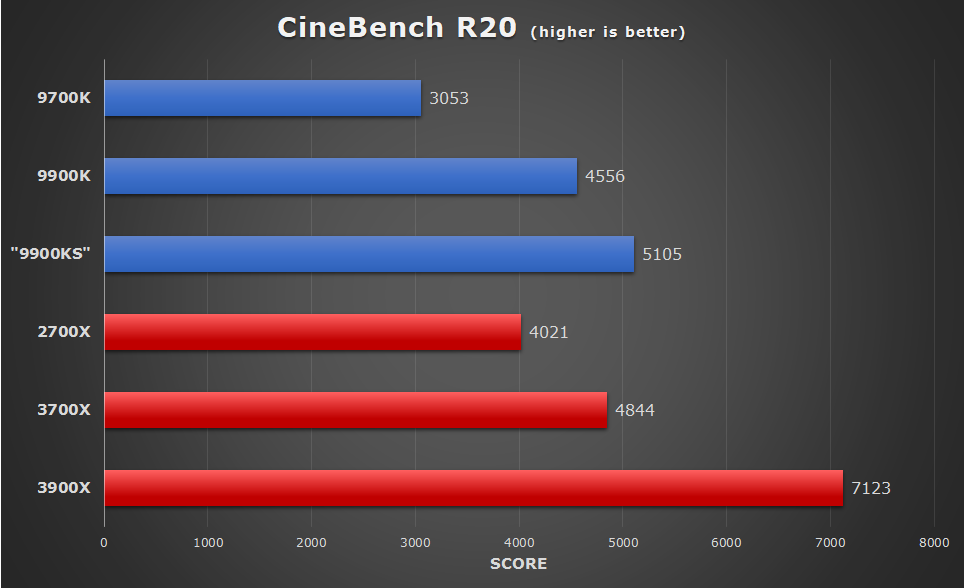 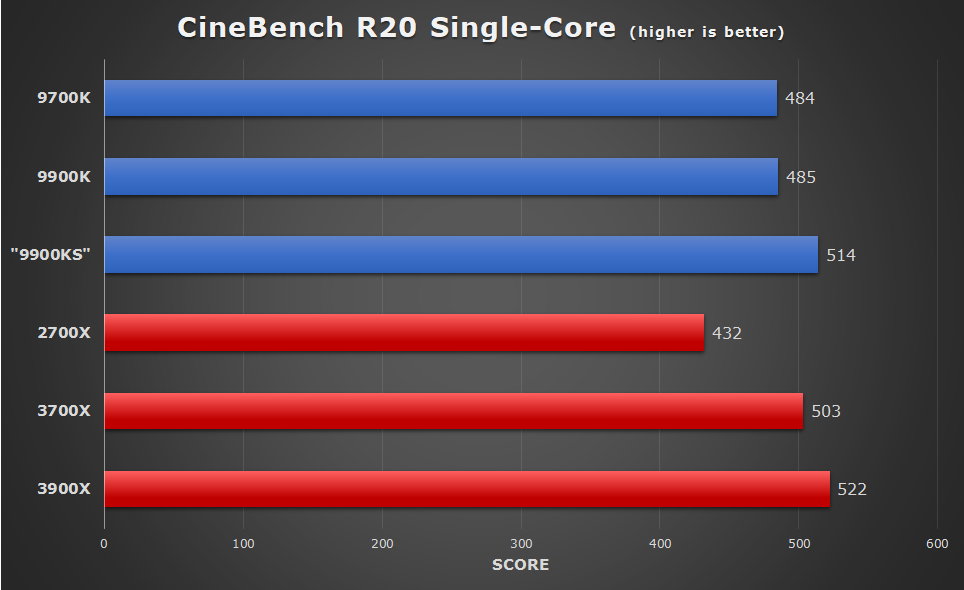 The Y-cruncher test shows that for certain instruction sets, Intel still has an advantage. 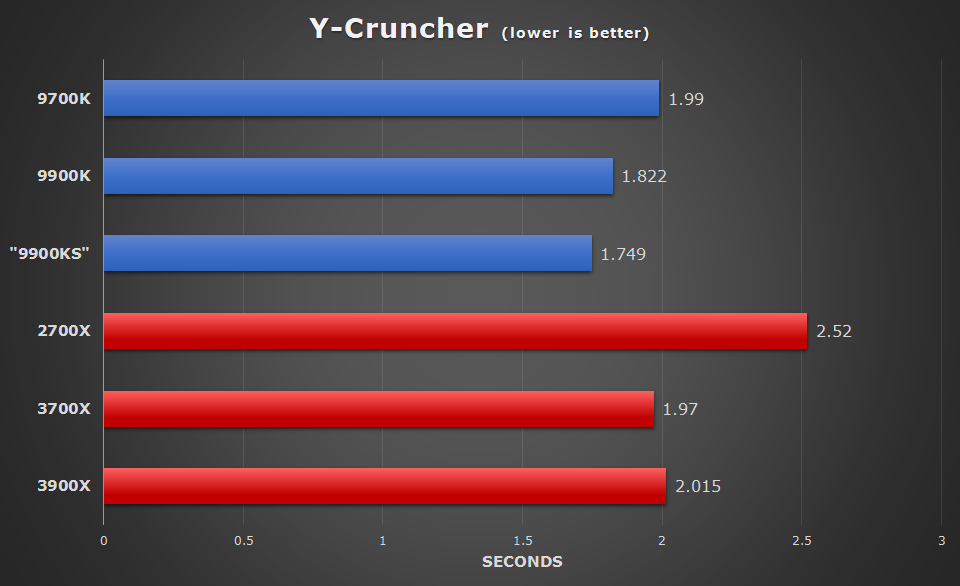 TimeSpy is ostensibly a graphics benchmark, but it’s probably more illustrative of 3D productivity tools. As you might expect, AMD comes out ahead here. I only did TimeSpy Extreme’s CPU test, which focuses on that processor instead of the GPU. 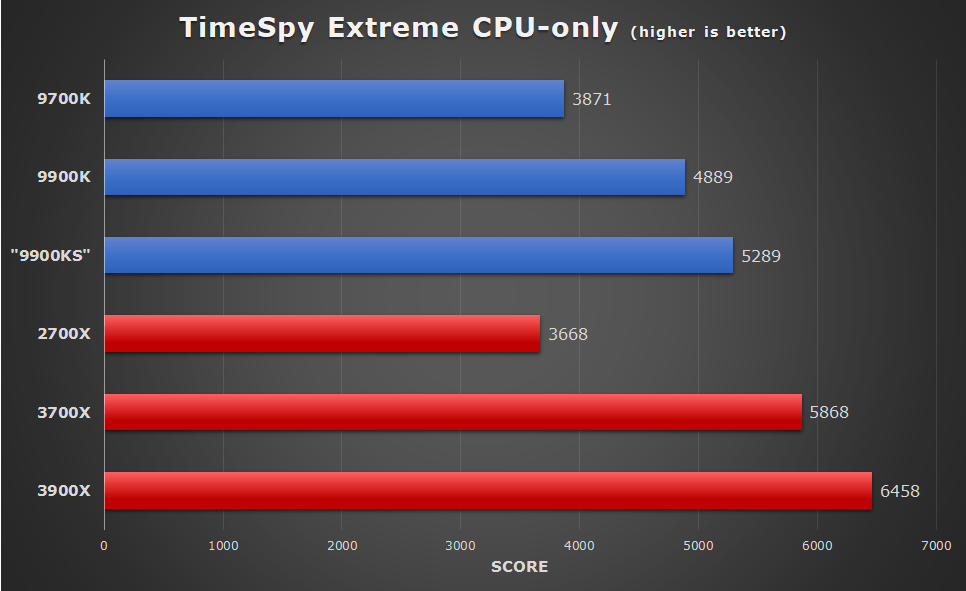 For gaming, more cores doesn’t usually make much of a difference. Intel has had better single-core performance for years, and that’s why its CPUs are typically better for gaming. But Intel has a couple of problems when it comes to gaming.

First, if you are playing at a higher resolution than 1080p, the GPU is likely doing most of the work. That flattens the differences between various CPUs. Also, more developers are making games to take advantage of additional cores. Many Ubisoft games, for example, already benefit from using CPUs with six-or-more cores. AMD seems determined to maintain a lead in terms of core count, and that’s going to make Ryzen CPUs more appealing to gamers for the long term.

All that said, the i9-9900K is still the best CPU for playing games. That is apparent when you test real games. Again, though — you only really see those results when using non-real-world graphics settings.

So Intel’s advantage in games isn’t nearly as big of a factor as AMD’s performance in everything else.

I tested Odyssey on low settings at 1080p. 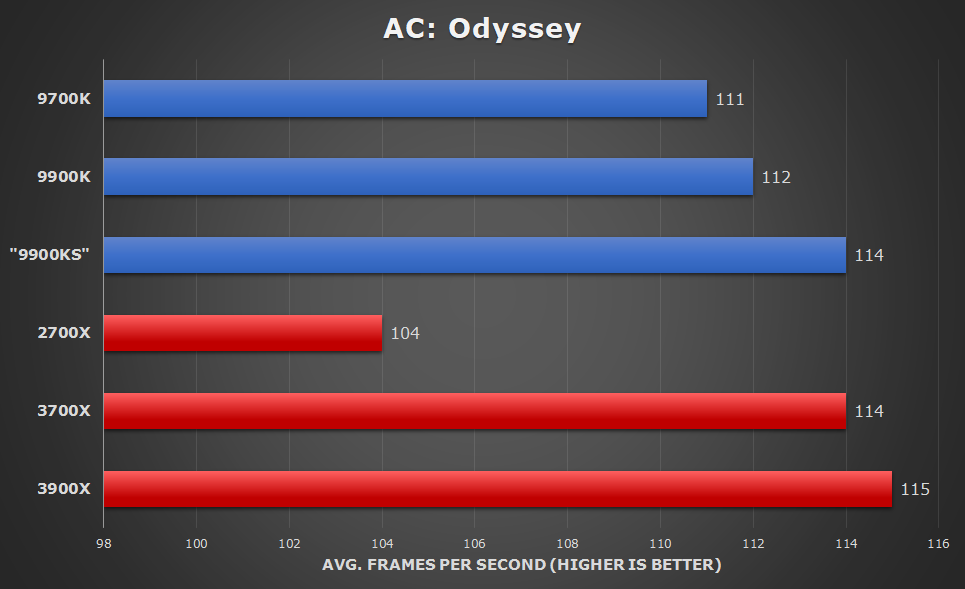 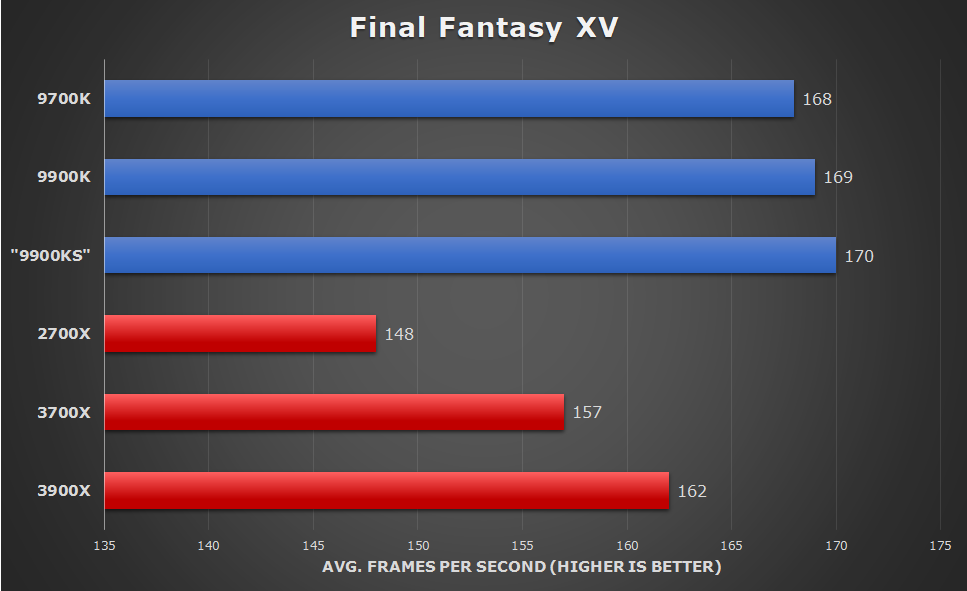 I tested GTA V on minimum settings at 1080p. 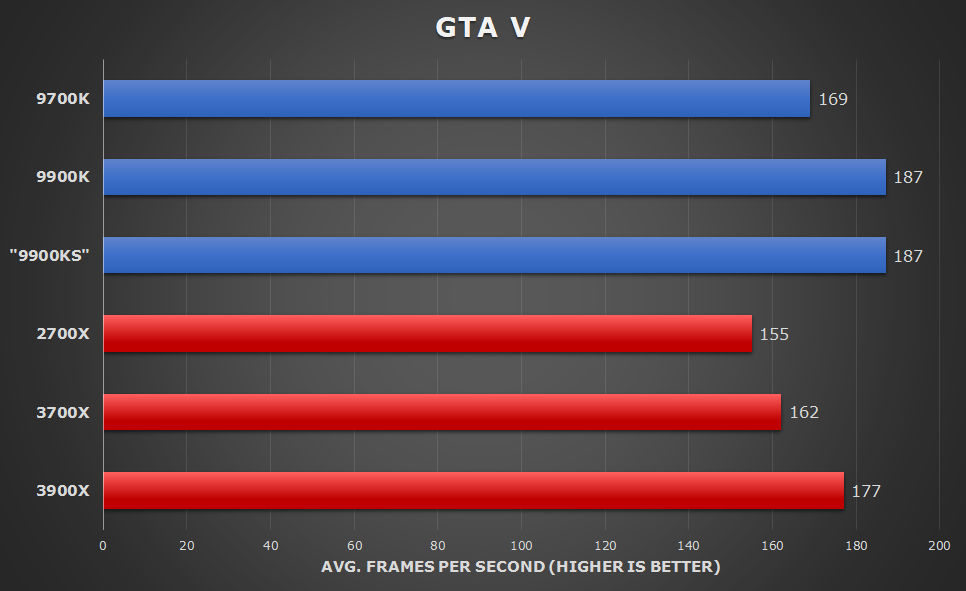 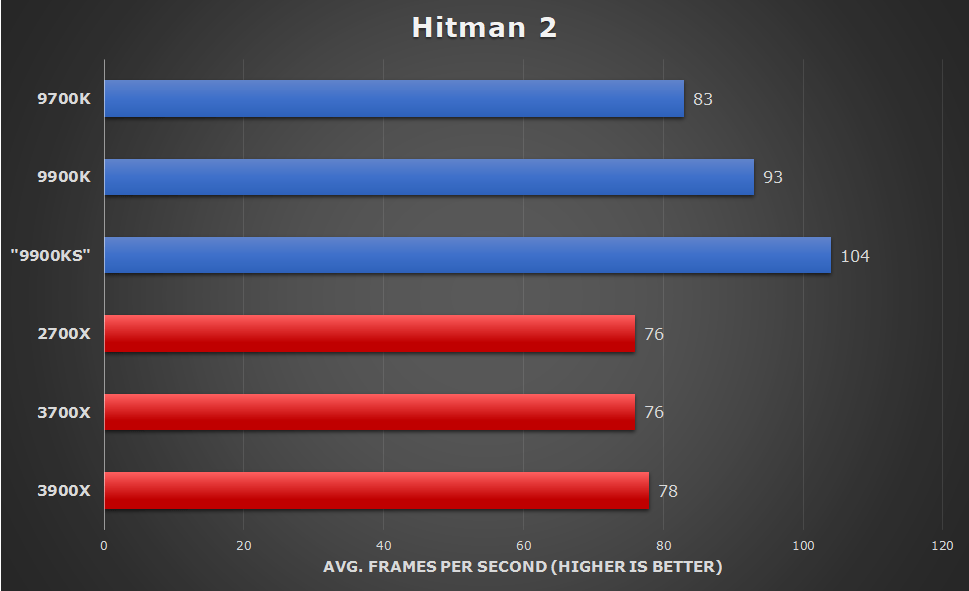 I tested Metro: Exodus on low settings at 1080p. 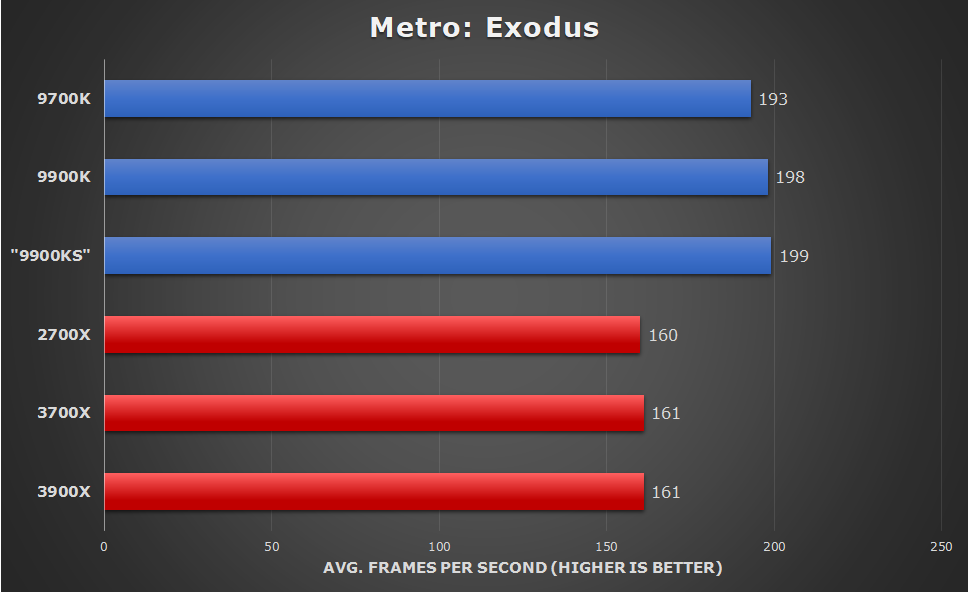 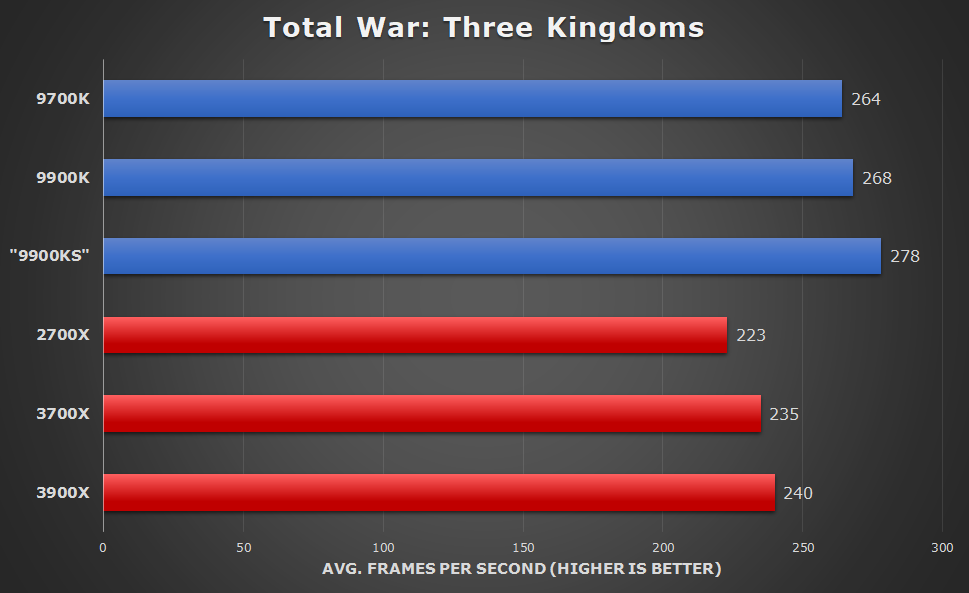 When it comes to raw encoding video using software through CPU (like with X264), the Ryzen 9 3900X stomps the 9900K. That’s no surprise. Again, 12 is greater than 8. But this is a function where Intel’s years of investment in specialized hardware and software separates it from AMD. Nearly ever Intel CPU has a dedicated GPU module built in that is capable of encoding video using the company’s proprietary QuickSync codec.

Using a program like Handbrake, the 3900X was regularly around 33 percent faster than the 9900K in my tests. But if you encode using QuickSync instead of X264, you can do the same encode in less than a quarter of the time of the AMD chip.

This is a very specific instance where someone might still prefer Intel over AMD. If you encode a lot of video for on-demand viewing — like on YouTube, QuickSync is a huge feature. Unfortunately, that doesn’t necessarily translate to live video. Intel has made a big deal out of working with the developer on the Open-source Broadcasting Software (OBS) project to integrate QuickSync. But with these high-end CPUs, that functionality is redundant. X264 will get you much better results at lower bitrates for livestreaming on Twitch, YouTube, and Mixer. And even at higher bitrates for recording using OBS, you are probably better off using X264 or Nvidia’s NVENC built into Turing GPUs (20-series and 16-series cards).

When I try to think back to when I became aware of how PCs worked, my memories go back to a few key points. I knew how important it was that my family get a 486 computer. I also remember all those commercials for Intel’s Pentium chips. And then, suddenly, it was AMD’s world. As I was getting through high school, we got a new PC, and it seemed like the only real option was an AMD Athlon CPU. In this time of the early internet, I don’t even remember how I learned that was the part to get. AMD didn’t have the same marketing budget. But the idea that AMD was building the only parts worth buying filtered down in a very clear and decisive way.

AMD’s dominance came as a result of both value and performance, and it lasted a couple of years before Intel found a way to strike back. And hey, I think we’ve found ourselves in a similar moment once again. And like in the early 2000s, AMD’s strategy is still a combination of value and performance.

It’s not like Intel is making junk. Its products are great, but relative to what AMD is doing, it’s hard to recommend something like a 9900K beyond very specific circumstances. Sure, Intel still holds a technical lead in gaming, but it really is only a lead on paper. In the real-world and in actual use — the one thing that we care about more than anything else here at GamesBeat — that chips are effectively tied. Intel can still say it has the best gaming CPU. It does. But it can’t say that it has the “best gaming CPU for you.” If you’re spending $500, you absolutely shouldn’t give up Ryzen’s superior performance in every other category to get a few more frames in 1080p gaming. If you’re spending $500 on a CPU, you better have at least a 1440p monitor, which wipes out Intel’s gaming performance gains.

I give the Ryzen 9 3900X my highest recommendation.

Is Intel done for?

So what does this mean for Intel? Well, it’s worth recognizing that a major reason AMD looks so good right now is relative. Intel has struggled to move to its next-generation 10nm manufacturing process. It is still stuck on 14nm while AMD is moving ahead to 7nm (which is effectively the same as Intel’s 10nm — this is mostly a branding difference). This means that AMD is getting the efficiency and thermal advantages of a new process while Intel is still trying to wring more out of an older technology. And Intel has done a great job of getting blood from that stone.

But if Intel would have moved onto 10nm by now as it originally planned, AMD’s CPUs simply wouldn’t seem as impressive. Intel had to make a mistake to create this opportunity for AMD. Let’s not take anything away from AMD, though. It capitalized on this opportunity. It’s doing everything right.

Intel is going to come back, though. And I can’t wait to see what that looks like. In the meantime, go build a PC — and get a Ryzen chip.

AMD’s Ryzen chips are available now. The company provided GamesBeat with sample units for the purpose of this review.