Salad Technologies has raised $3.2 million to help you earn rewards from your PC’s idle time. You can then use those rewards to buy products, make donations, or fill your bank account.

In return, Salad uses your PC to mine for cryptocurrency. Salad hopes this plan will position it to define the future of distributed computing at a time when the industry has a voracious appetite for computing power. The new round of funding for the company means that we are making real progress in getting paid to play games, or what I call the Leisure Economy.

“The true motivator for our users is not so much these nebulous coins or tokens that their computer generates,” Salad CEO Bob Miles said. “It’s more about the value they get in the form of subscriptions, or games, or gift cards. That’s the incentive wrapper. What we’ve seen is that our users are sticking around.”

In the past couple of years, Salad has amassed 250,000 computer users, and that user base has generated 1,000 years of compute time. Carthona Capital led the round. Kickstart Seed Fund and Royal Street Ventures joined the round. This brings the Salt Lake City, Utah-based company’s total financing to date to more than $5.3 million. 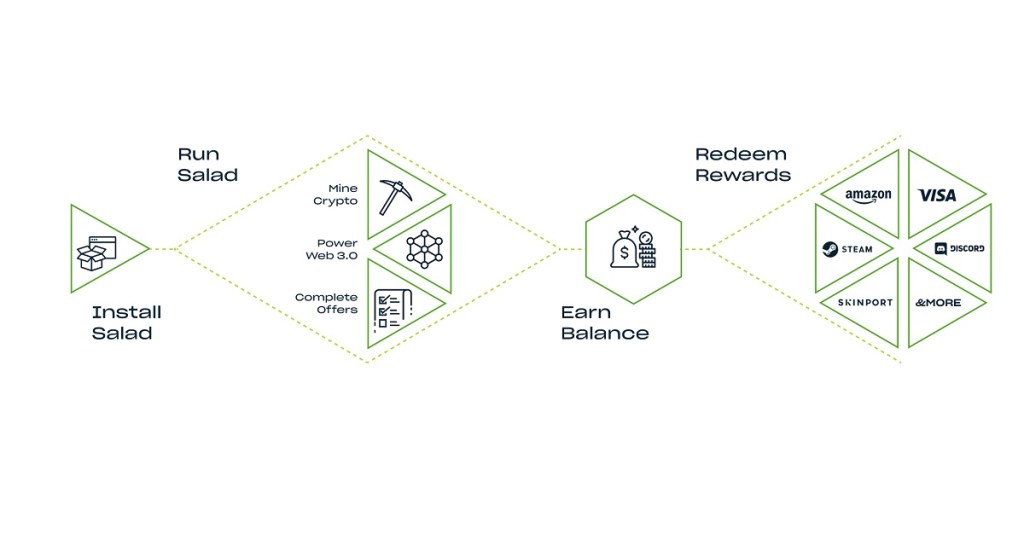 Above: How Salad works

This new funding will accelerate Salad’s growth through a strategic expansion of the platform’s active user base and technology platform. With more than 400 million powerful gaming PCs globally, Salad’s technology is tapping into a market opportunity capable of rivaling the world’s fastest supercomputers. Salad pools these powerful yet underutilized compute resources to create a next-generation distributed computing infrastructure. The result is a network capable of scaling decentralized compute resources for large enterprise and ambitious research efforts at a fraction of the cost of rival cloud computing providers, Miles said in an interview with GamesBeat. “Now we can really focus on growth and expanding our network over the coming six to 12 months,” he said.

Once you sign up with Salad, you get rewards that you can redeem through a new payment gateway called SaladPay. It’s a reminder of the past few years when everyone was using gaming computers to mine Bitcoin during its heyday. It’s hard to get much by mining Bitcoin today, but other cryptocurrencies like Monero or Ethereum still bear fruit, Miles said.

Salad’s software application runs in the background when a user’s computer is idle, and it mines cryptocurrency. Miles got the idea in late 2017 when he was looking at blockchain, the secure and transparent decentralized ledger that can be used to authenticate information such as identities through a network of computers. This past decade, the growth of data has outpaced Moore’s law, or the doubling of computing power every two years, by 60 to 1, Miles said.

“The infrastructure that we’re building with our users is providing massively elastic compute resources at a fraction of the cost of what you would pay at a cloud provider,” Miles said. 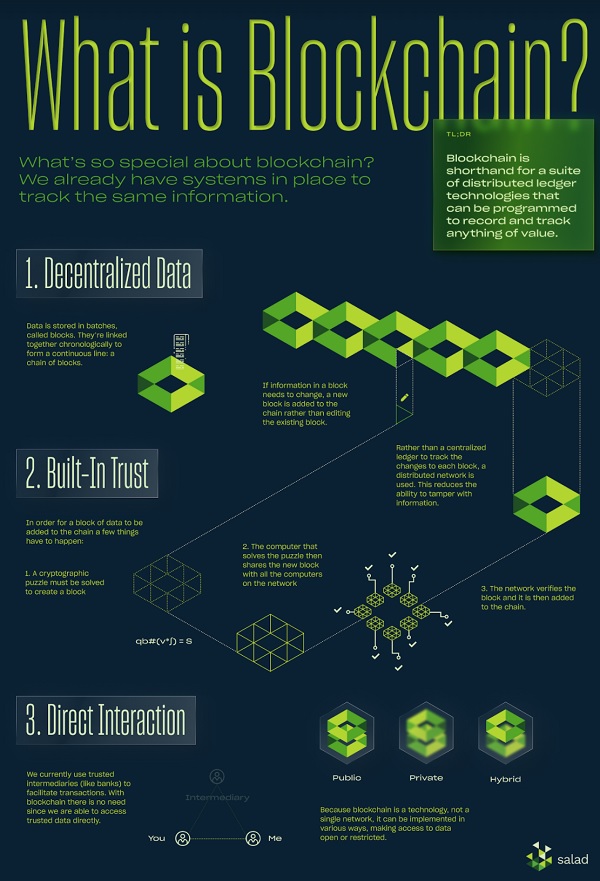 Above: How blockchain works

One of the challenges is that users have to be educated about the value of their computing power and the nuances of cryptocurrency. The company has just eight employees. They can only spread the word so much.

“Since March, we’ve tripled our user base,” Miles said. “We don’t have marketing and so we’re growing by word of mouth. We’re starting to rival the world’s fastest supercomputers. But it’s not enough. We’re on the path toward a real compute crisis. There is so much demand for compute resources.”

Last week’s outage of Amazon Web Services was a kind of wake-up call, as we are becoming dependent on companies with huge server farms, and that’s concentrating the control of the internet into the hands of a small group of companies. That’s not good for consumers, Miles said.

“It’s going to be an antitrust nightmare,” he said. “So many products and services went down. It was a wake-up call.”

To start earning, users simply download, install, and run the Salad software application to start accruing Salad Balance, the company’s proprietary form of credit. For new users interested in crypto mining, it simplifies the process of researching new mining tools, performing the technical setup, and keeping up to date with ongoing maintenance and optimization.

Salad is open source and supported by an active Discord server with over 20,000 members and a growing network of powerful gaming PCs worldwide. Individuals who run the application turn their graphics processing unit (GPU) power into online store credits, which they can spend on subscriptions, games, gift cards, and more. The most popular application that users use their credits for is a subscription for Discord Nitro.

As Salad expands, it will continue to build out its suite of products to service a growing user community and partner organizations. For the blockchain community, the company offers SaladBar, which provides blockchain teams with white-knight hashpower and network seeding. Salad’s blockchain partners have access to a powerful network of workload-agnostic PCs that deliver tens to thousands of workers or nodes to seed or support Layer 1 blockchain networks.

“It’s been a tough year, with COVID-19,” Miles said. “But we’re hiring and bringing on more employees with this fundraising.” Miles is focusing on what users want and how to turn the latent value of their computers into something that’s really cool.

Within five years, Miles hopes the phrase “pay with your PC” will be a reality.