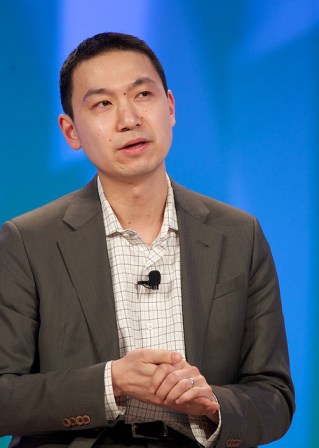 Web-based software is supposed to make things easy. It’s supposed to just work — that’s what the cloud is all about.

But all that work that happens behind the scenes has kept Salesforce from being as nimble as it should be, said Salesforce.com’s executive vice president of marketing George Hu. He made the comments at the DEMO Spring 2011 conference in Palm Desert, Calif., today.

It’s a problem that keeps Hu up at night — how difficult it is to train each new employee to be able to manage Salesforce’s ever-expanding suite of cloud products. The company has seen some pretty decent growth, with its revenue rising 29 percent in the first quarter this year when compared to the same quarter a year earlier. That means the staff has to grow to keep up with its customer base.

“We’ve grown from salesforce automation — just one program — to now being CRM plus collaboration plus data as a service,” Hu said. “That’s a lot of products to basically train our employees and also our customers, so we have a huge education drawback.”

Salesforce has been on a massive acquisition spree, as well. Salesforce dropped a whopping $212 million on Web-application developer Heroku in December, and then spent an undisclosed amount on email contact manager Etacts. Salesforce also acquired Web-conferencing provider Dimdim for $31 million. That amount equals almost half of the cash Salesforce had on hand at the end of its most recent operating quarter, according to the company’s most recent filing with the Securities and Exchange Commission.

But because the company has grown so large, it has become more difficult to train the company’s sales force and new companies. That has opened the door for smaller, more agile startups to come in and make a legitimate claim to their turf. One of those companies, enterprise social network Yammer, has been successfully going head-to-head with Salesforce’s enterprise social network Chatter for some time. Yammer has already picked up more than 100,000 companies as customers since it launched.

The competition doesn’t bother Hu though, since he said Salesforce had already “cracked the distribution code” for getting new customers to adopt the service. About 80,000 of Salesforce’s 92,000 customers have already begun using Chatter rather than Yammer, he said.

“Fact that we were able to get eight out of nine customers to adopt, it’s been a greenfield out there despite startups out there,” Hu said. “Even when we see a customer that has played around with some startups, we’re able to come in with a different value proposition.”