Salesforce, one of the largest providers of web-based customer relationship management (CRM) software, announced today that it is launching a cloud-based database at Database.com for its developers.

Salesforce has recently begun a shift toward a more developer- and employee-centric focus that has drawn on lessons learned from the consumer market. That means opening up the software to make it easier for developers to create new applications for the service and giving them the computing firepower to handle it. Its flagship software, which is billed as a software-as-a-service, is run on cloud servers that can handle a lot of heavy lifting and is web-based. The next logical step was to provide developers with a spot in the cloud to quickly store and access data, said Ariel Kelma, vice president of platform product marketing for Salesforce.

A big focus of Database.com is security — which is something that prevents a lot of companies from fully moving their data onto the cloud. Most companies are concerned that offloading sensitive information onto remote databases makes it more vulnerable. A lot of companies also have a number of compliance rules that keep them from doing so. To fight that perception, Salesforce is bringing in its 11 years of experience with security.

“Whenever there’s some new innovation in security or someone suggests an enhancement, it goes out to all of our 87,000 customers immediately,” Kelma said. “Users don’t have to wait however many months for it to trickle down.”

Salesforce’s micro-blogging service Chatter recently changed over to a freemium model — in which a stripped down version is available for free, and users can upgrade to the standard model. That came as a result of pressure from other new enterprise applications like Yammer that offered their services for free at first.

“We’re big fans of the freemium model,” Kelma said. “If you’re a multi-tenant cloud provider, it’s one of those things you just have to have.”

But it all boils down to a pretty common trend in the enterprise software industry. Lessons are being drawn from the consumer space, where giants like Facebook and Twitter are teaching traditional enterprise giants the new rules of software. Salesforce learned how powerful micr0-blogging can be from companies like Twitter and Yammer, and applied those rules to Chatter. It’s now learning that its customers have enormous amounts of data, and need some place to store it and quickly access it.

The cloud-based database is quick. Information that was changed via the web-based interface through Salesforce was changed in both command line and Facebook profiles that accessed the database within seconds in a demo of the product. So it will be interesting to see just what developers can do with the service. 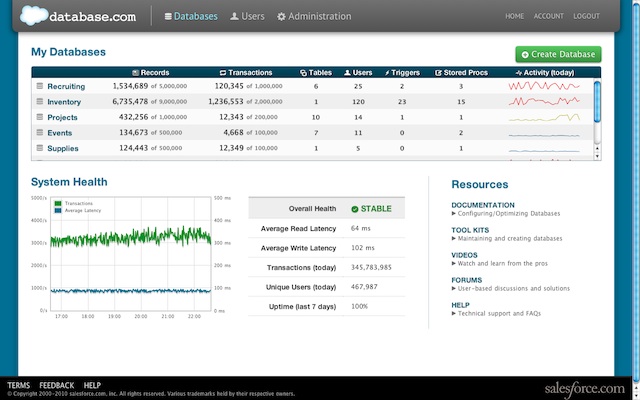