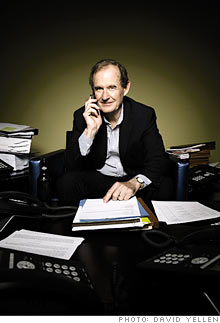 Salesforce.com, the major provider of customer relationship management software, is suing Microsoft for patent infringement — its aggressive response to the suit Microsoft filed against the company for around nine intellectual property violations last month.

Salesforce’s lawsuit claims that several Microsoft cloud products infringe on its patents, including the .NET framework providing tools and support for third-party developers, and its SharePoint collaboration and document management software for businesses.

In its corner, Salesforce has David Boies (pictured above), one of the prosecutors in the government’s antitrust case against Microsoft. Not only does he have experience with intellectual property suits, representing Oracle against SAP, but he’s familiar with how Microsoft behaves in these situations.

The skirmish is yet another example of battles heating up in the cloud computing space. As the industry grows, the bigger players are scrambling to mark their territory, and it’s rarely peaceable. The suit that Microsoft filed in May asked for a court order that would block Salesforce from incorporating any “Microsoft-invented” features into its products.

In the counter-suit, the smaller CRM company is asking that the court prohibit Microsoft’s use of any Salesforce products and award it an unknown amount in damages.

Both Salesforce CEO Marc Benioff and Microsoft deputy general counsel Horacio Gutierrez are talking big about how they are the clear winner in this case — making the outcome even more unclear.