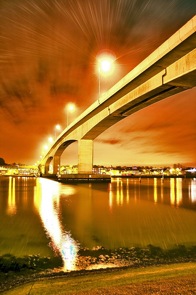 Adam Gross, Salesforce’s vice president of platform marketing, says most applications built on the App Engine tend to be more social- and consumer-focused. Force.com, of course, has been all about business applications. Now applications can tap into both platforms, drawing on both Google’s infrastructure and Force.com’s business tools and data.

Gross says the partnership isn’t launching with any flagship applications, but he showed me one example of how App Engine and Force.com could be brought together. Appirio, a startup that specializes in connecting cloud platforms, built a simple slot machine game that runs on Google App Engine. Casino company Harrah’s can then add the game to its site, which runs on Force.com.

Salesforce chief executive Marc Benioff has touted his vision to connect various Internet clouds, in contrast with software giant Microsoft, which is launching its own platform for Internet applications, called Windows Azure. (Gross, incidentally, said Salesforce might be interested in partnering with Azure, but it’s too early to say.) Some commentators chalked those claims up as hyperbole, and it’s true that Force.com can be called “open” only in a few specific ways. Still, the Google announcement, coupled with the previously-announced compatibility with Amazon and Facebook, are laudable moves in this direction.

Salesforce, whose bread-and-butter business comes from customer relationship management (CRM) software, has partnered with Google before, most recently by allowing Force.com applications to access data from Google Apps.