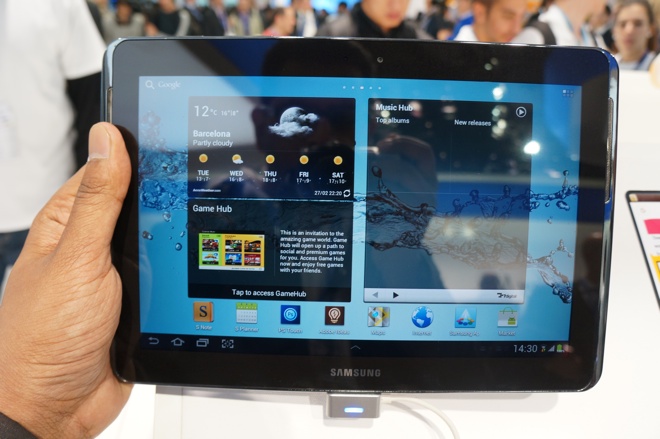 Samsung didn’t do a good job of hiding the fact that it was going to show off a larger Galaxy Note here at Mobile World Congress (there were giant posters everywhere before the show started), but that doesn’t mean the device is any less impressive.

As the video below shows, the Galaxy Note 10.1 looks a lot like the company’s Galaxy Tab 10.1 Android tablet. What’s different is that the Note 10.1 includes support for the company’s S Pen stylus, which is powered by Wacom technology. I found the S Pen to be a nice addition to the original Galaxy Note, but that device was too small to work well for handwriting, and too large to work well as a phone.

The Galaxy Note 10.1, however, seems perfectly suited to handwriting and drawing with the S Pen.

I only had a few minutes to play with the device, but from the get-go I found it easier to write on the Galaxy 10.1 than I could with the 5.3-inch Galaxy Note. And given that Samsung’s Android tablets so far haven’t exactly sold like hotcakes, the company could use a significant feature to differentiate its tablets from the iPad.