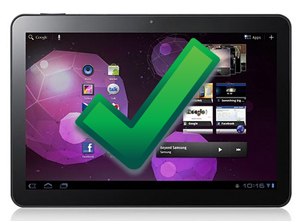 Samsung is now allowed to sell its Galaxy Tab 10.1 tablet again in most of Europe after a German court lifted an injunction on the device requested by Apple.

Avi Greengart, research director for consumer devices at Current Analysis, thinks Samsung should be pleased with the win but said the company should expect similar legal battles in the coming days and weeks.

“Samsung is certainly breathing a sigh of relief,” Greengart told VentureBeat. “Tune in tomorrow for the next exciting legal development.”

Last week, Samsung said it was “disappointed” when the German court blocked the sale of the Galaxy Tab 10.1 in the EU (except the Netherlands) on the grounds that the Tab imitated the iPad so closely it infringed on Apple’s intellectual property rights. Samsung could have faced fines up to $350,000 per unit sold under the ban.

The Duesseldorf regional court took this back today by saying it was questionable whether it had the authority to bar the sale of an international product outside of Germany. Since Samsung is based in South Korea, the court said the ban should be lifted for now.

The news is yet another continuation of Apple’s legal squabbles with Samsung, which started in April with a lawsuit in the U.S. concerning the company’s Galaxy Android smartphones and Galaxy Tab. Apple argued that Samsung’s devices considerably imitated the iPhone and iPad. Samsung filed a counter-suit against Apple, but the battle also extended to the U.S. International Trade Commission, which can block the importation of devices into the U.S.

What do you think of the ongoing battle between Apple and Samsung?