Samsung says it’s in the business of finding the next big thing by asking: “How do you affect the lives of people and make [them] better?” As part of its focus on the creative process, the company today introduced the Samsung Gear 360 camera. With this standalone device, you’re able to capture a 360-degree view as a photo or video and then play it back within Samsung’s Gear VR headset or through the Gear 360 mobile app on the Galaxy S7 and S7 edge smartphone.

Weighing 5.39 ounces (153 grams), the Gear 360 spherical camera is part of Samsung’s efforts to transport the future of photography into virtual reality. It lets you produce high-quality video and content, while also giving you the tools via its app to edit and share that “Wow” moment.

Samsung hasn’t released pricing for the device, but said that it’ll be available sometime in Q2 2016 in “select countries.”

The camera comes with two F/2.0 fish-eye lenses that take 195-degree photos and videos, which are then stitched together. It allows photos of up to 30 megapixels and supports “90 percent of 4K” for the whole sphere when capturing video at high resolution (3840×1920). The device holds up to 128GB in a microSD card, meaning that it can shoot up to 7 hours of video at the highest resolution. The 1,350 mAH lithium-ion battery is said to last for up to two hours. 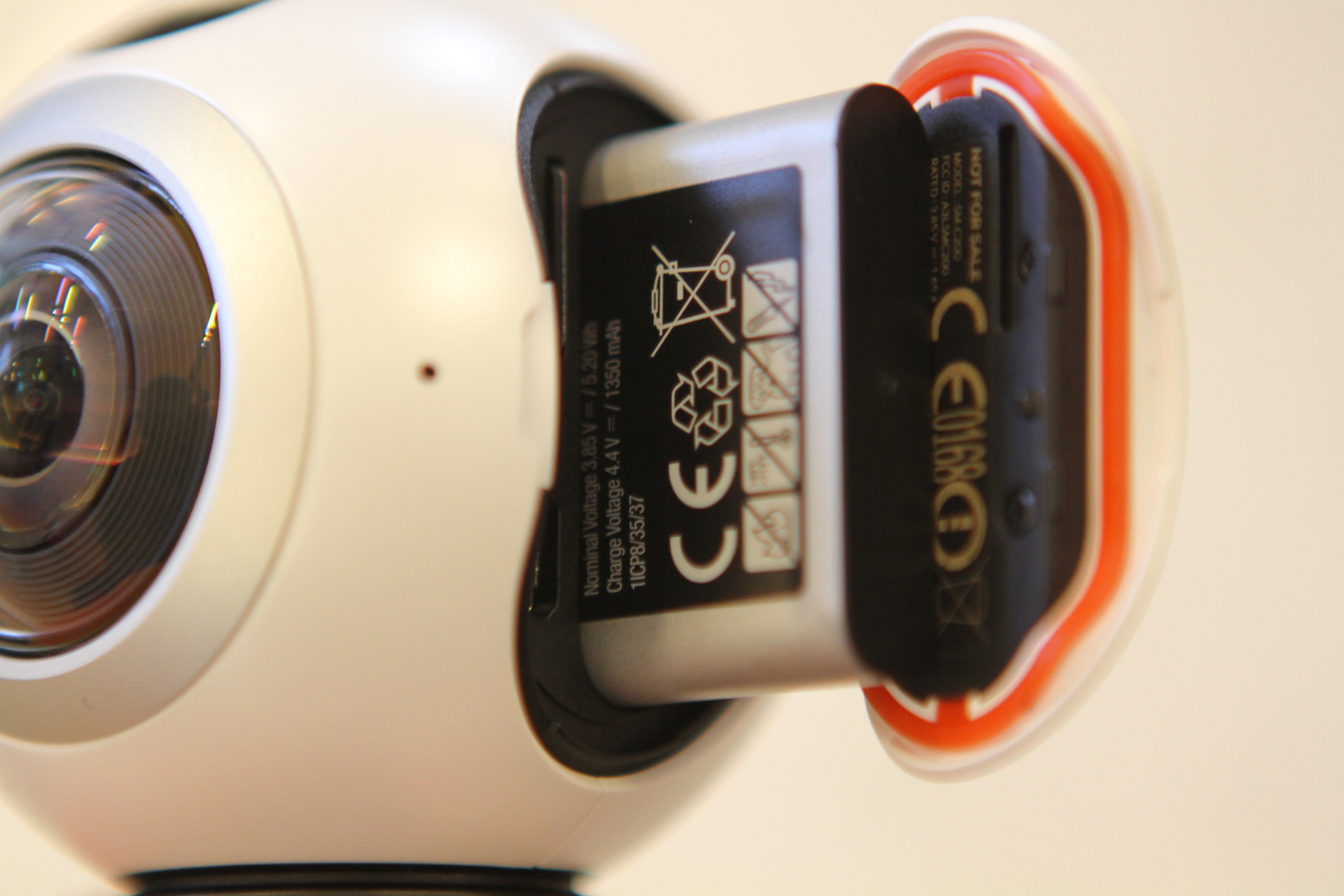 It has a DRIMe5s image processor and a 0.5-inch PMOLED display.

There are four modes on the Gear 360, allowing you to capture still images, time-lapse images, video, and loop. With looping, you can utilize the camera almost like a security or monitoring device. If you’re so inclined, you can also use one of the fish-eye lenses to capture 180-degree views.

The camera is also splash resistant, with an IP53 rating, which Samsung said allows you to use it in the rain, though not when you go swimming. However, the company does plan on providing a bunch of accessories to go with the camera, including an underwater housing. 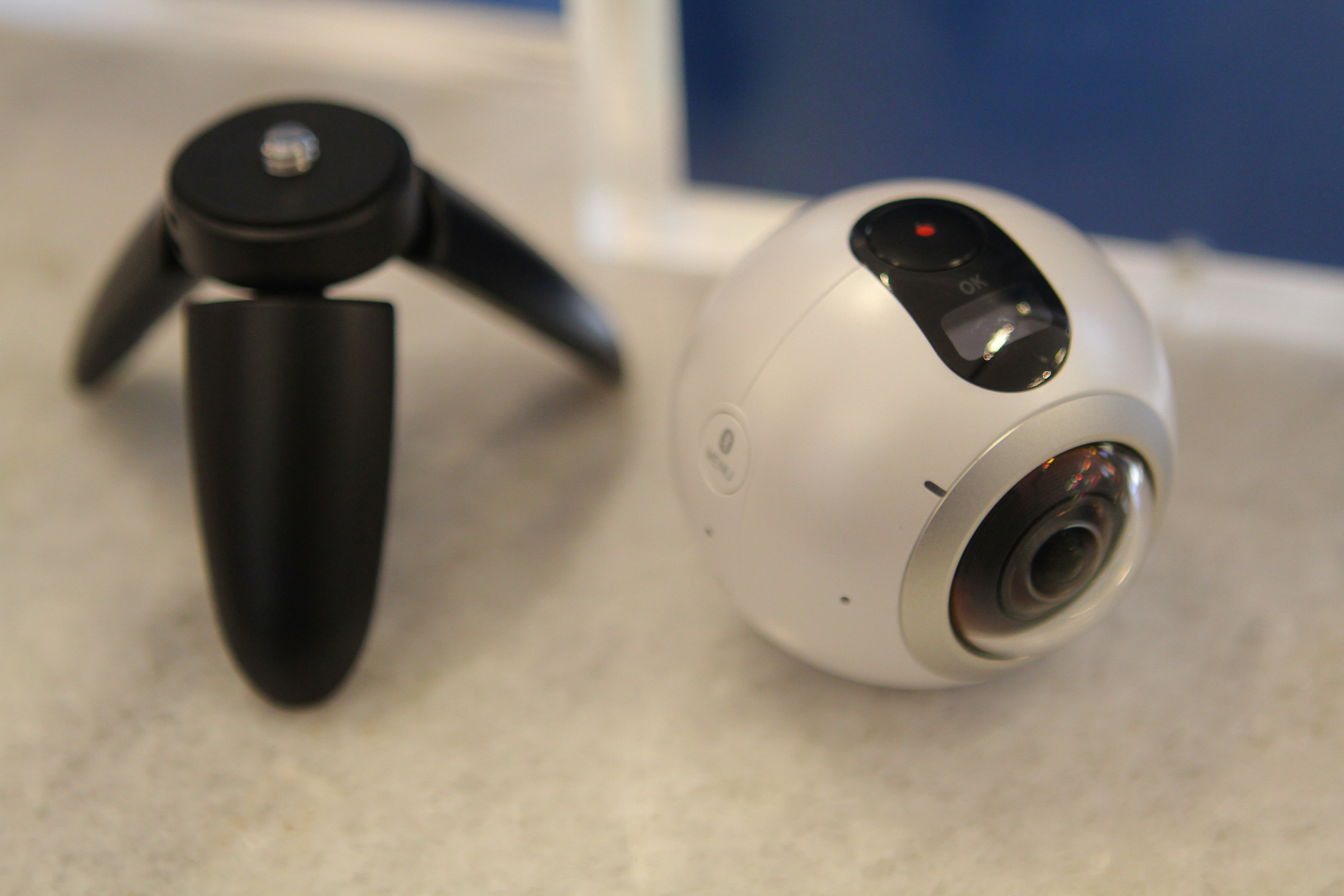 Above: Samsung Gear 360 camera separated from its tripod mount.

Slightly smaller than a baseball, Samsung’s Gear 360 has a universal mount that can be placed on a selfie stick or any mount or tripod that would hold a GoPro or other camera. You could potentially get it set up on a drone, if you wanted. The device comes with a small tripod. An accelerometer and gyroscope are built into the camera.

An Android application accompanies the Gear 360, turning the Samsung Galaxy S7 and S7 edge into a remote control. It features a real-time preview mode so you can properly configure the camera. Once a photo or video has been captured, it can be transmitted via Wi-Fi into the app, where you can make edits, such as modifying the sharpness, white balance, HDR, lighting, ISO limit, and wind cut.

Samsung has managed it so that when you view the finished media, the edges have been blurred for a seamless end result, rather than giving you a half-baked Photoshop version. The file can then be viewed in virtual reality using Samsung’s Gear VR headset or by sharing it on YouTube or Facebook. 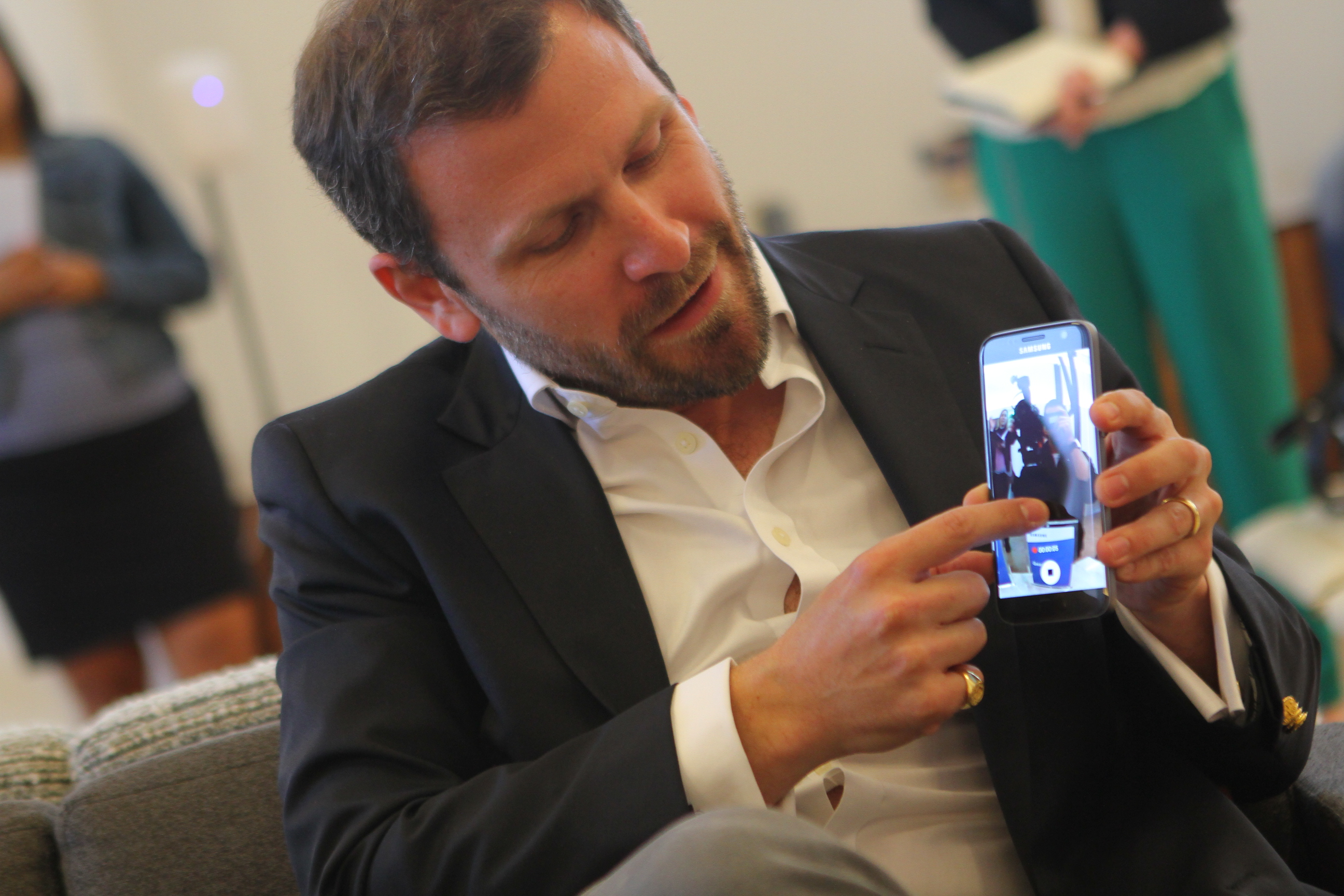 For those who want to do more in-depth editing, Samsung said that it has PC editing tools available. So users could even use the device in multiple scenes to produce quality virtual reality movies that can then be played back on Samsung Gear VR or other devices.

If you don’t have a Galaxy S7 or S7 edge smartphone, you can still use the Gear 360 camera, but it will be more of a manual process. Samsung told VentureBeat that it’s looking at backward compatibility to make the camera work with older Galaxy smartphones but didn’t offer a timeline for when that would occur.

Samsung’s entry into the 360-degree market isn’t a surprise, as it has been talked about for a while. However, its device enters a crowded field, as quite a few other contenders have emerged, including Lytro’s Immerge, Nokia’s $60,000 Ozo (which is available this quarter), GoPro’s $3,000 spherical camera rig, VNS’s Mobile V.360, the $350 Ricoh Theta S, 360fly’s $400 4K camera, Giroptic’s $500 360cam, the $800 Bublcam, and Kodak’s $500 SP360. Samsung believes that the Gear 360 will appeal to the general public, and clarified that it’s not specifically going after extreme sports enthusiasts or any niche market. Rather, it’s looking to be the happy compromise among 360-degree devices, while providing a high-end camera with high-quality resolution. 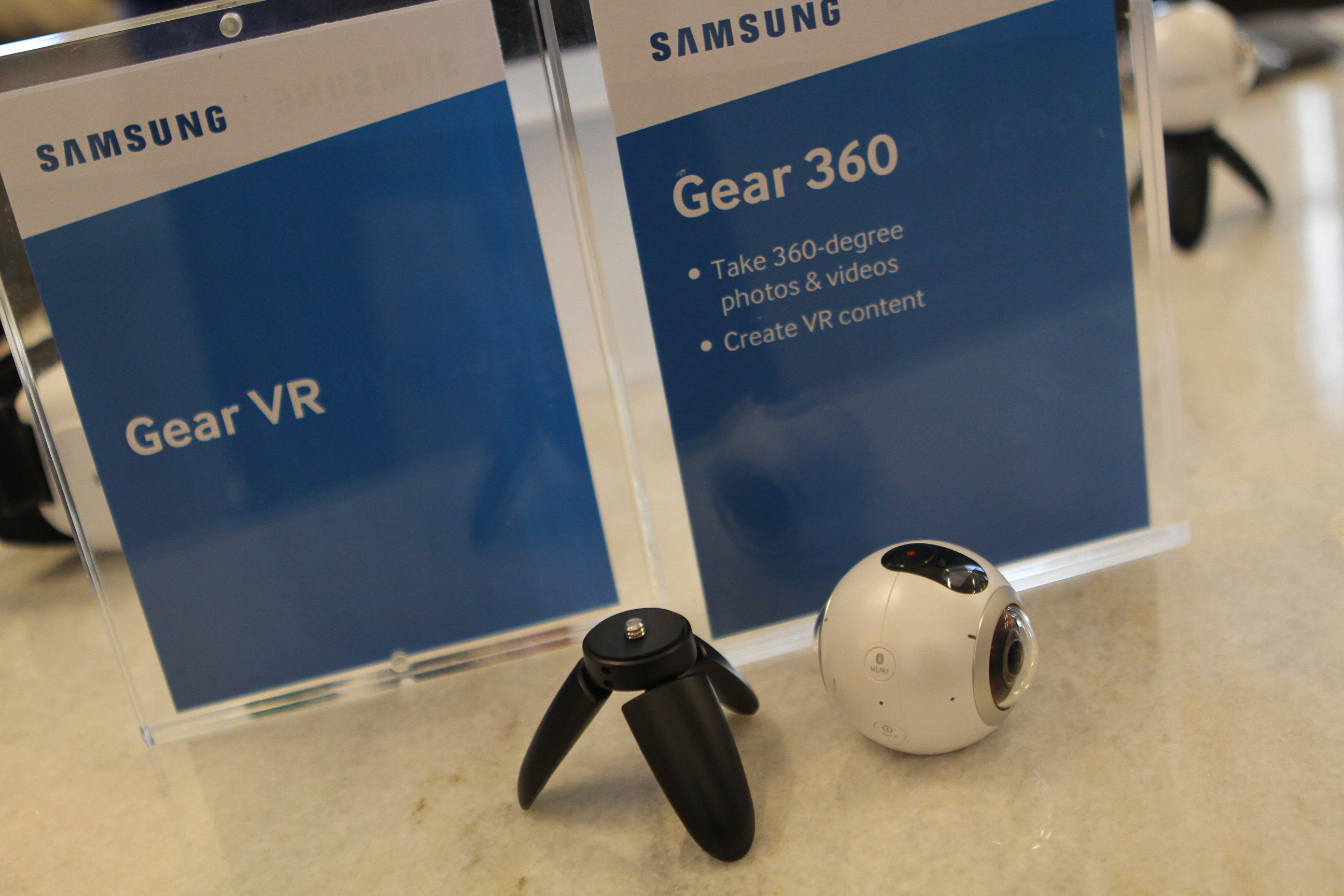 Much has been made of 360-degree videos and photos, starting with how useful the technology is in virtual reality. Facebook CEO Mark Zuckerberg has said in the past that the technology will transport us to places we’ve never been and further connect people around the world. At its F8 developer conference in 2015, the company demoed the power of virtual reality teleportation, showcasing the future Zuckerberg believes in.

The social networking company has even leveraged 360-degree videos on its platform, starting with a unique view of the trailer for Star Wars: The Force Awakens. In January, it announced that it has open-sourced its Transform software, which it uses to stream 360-degree videos, allowing more applications to incorporate it into their own offerings. YouTube also supports these types of videos.

And while only select publishers have been able to share their 360-degree videos so far, that’s perhaps largely due to the price tag on these cameras. But now with the emergence of consumer-oriented devices, we’ll likely start to see casual users posting in-depth photos and videos, giving us a more well-rounded experience of their adventures.