Samsung has launched its Bixby Marketplace, a dedicated app store where third-party developers can offer their own Bixby-compatible services, similar to Amazon’s Alexa skills. The marketplace, which apparently started rolling out a few days ago, is officially now open for Samsung customers in the U.S. and South Korea.

Bixby, for the uninitiated, is akin to Amazon’s Alexa or Apple’s Siri — it’s an intelligent voice-enabled virtual assistant that allows users to ask questions about almost anything.

There are various components to Bixby, including a text element that allows people to type a message to the assistant asking it to do something — like remind the user to take the dog out for a walk when they get home. Then there is Bixby Vision, which integrates with the phone’s camera to serve up information on things in the real world, and Bixby Home, a personalized page of information, such as reminders, news, and weather. A few months back, Samsung also announced Bixby Routines, which is basically AI that learns your habits to anticipate what you might want at a specific time.

Samsung launched Bixby back in 2017 alongside its flagship Galaxy S8 handsets, and today the assistant is available globally on more than 500 million devices — including Samsung’s smart fridges, smart TVs, phones, tablets, and — soon — Samsung’s very own smart speaker.

While Samsung continues to claim the top spot in terms of global smartphone shipments — despite a broader downward trajectory in phone sales around the world — it lags behind other big competitors in the virtual assistant realm. Market research firm Ovum last year estimated that Bixby was used by just 6% of people in the U.S., compared with Amazon’s 24%, Apple’s 22%, Google’s 20%, and Microsoft’s 10%. This is partly what the Bixby Marketplace is designed to combat — Samsung is counting on developers to make Bixby more useful.

The marketplace is available through the main Bixby page on Samsung phones, though the company eventually intends to include it as part of the main Galaxy app store. Through the marketplace, users can search for services — which Samsung calls “capsules” — that enhance Bixby.

These capsules are categorized by type, such as “travel and transportation,” “food and drink,” “sports,” “shopping,” and “productivity,” and many well-known apps are featured at launch, including from Spotify, Uber, Google Maps, Yelp, and YouTube. 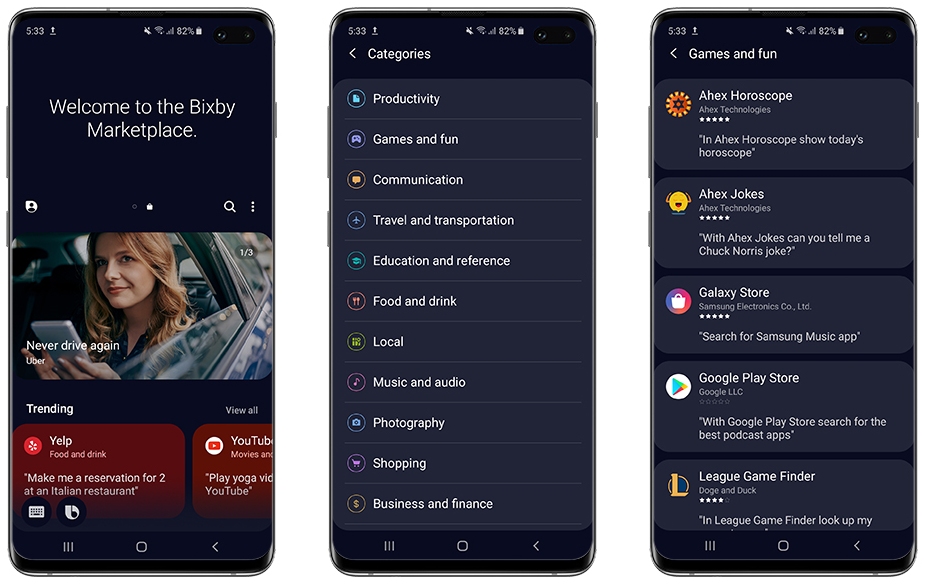 Though users can browse the marketplace for capsules manually, they can also search verbally using natural language instructions. In an interview with VentureBeat last month, Bixby chief Adam Cheyer offered a glimpse into some of the new marketplace’s funtionality. If a user asks Bixby to “get me a ride to San Francisco” when they don’t have any ride-sharing services enabled, for example, Bixby may respond by suggesting several providers (such as Uber). “You’ll then be prompted to try [the different options] and decide whether you like one brand, another brand, or both,” Cheyer said. “If you enable more than one, Bixby will ask which you’d like to use by default.”

Users can add capsules with a tap, and — as with traditional app stores — the Bixby Marketplace supports ratings and reviews to help surface the best, or most popular, capsules.

At launch, the marketplace won’t feature “premium capsules,” which is how Samsung refers to paid or subscription apps — but that will be coming further down the line. However, it will support transactional capsules, such as a service like 1-800-Flowers sending flowers to someone on request and charging the order to the user’s card.

Today’s launch is just phase one of the Bixby Marketplace — the company said it has “more exciting updates” planned for its Samsung Developer Conference later this year. Hopefully, it will be ready to share more about when capsules will be available to consumers in other markets.