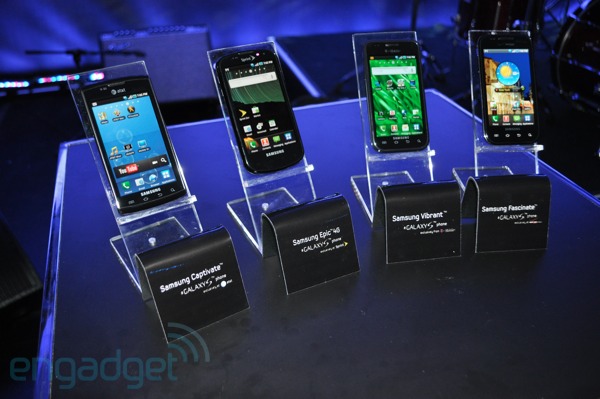 When last we reported on Samsung’s Galaxy S, we didn’t yet know that Samsung was actually planning to release an entire line of Galaxy S phones across major U.S. carriers. At a launch event in New York last night, the company finally showed off its ambitious lineup of Galaxy S phones, including the T-Mobile Vibrant, Verizon Fascinate, Sprint Epic 4G, and AT&T Captivate.

All of the phones share the same basic specifications — including a 1 gigahertz Hummingbird Samsung processor, 4″ Super AMOLED screen, 5 megapixel camera, and Android 2.1 with Samsung’s TouchWiz skin — but each have their own hardware and software customizations for their specific carrier. Sprint’s Epic 4G, for example, features a slide-out physical keyboard and a front-facing camera for video conferencing. Both the T-Mobile Vibrant and Verizon Fascinate appeared to be very similar, and the AT&T Captivate differs only with its boxier design.

I spent the most time with the Fascinate, and upon picking up the phone I quickly realized that Samsung wasn’t kidding about the quality of its Super AMOLED screen. It’s brighter and sharper than traditional OLED displays, like those on the Nexus One and Evo 4G, and it’s also built to perform better in sunlight. The 4-inch display noticeably dwarfed my iPhone 4. Performance-wise, the Fascinate was the most responsive Android phone I’ve used so far. Touchscreen interaction like swiping and pinching was fast and smooth, applications loaded quickly, and there was none of the sluggishness I’ve seen when testing the Evo 4G.

The phone was also surprisingly lighter than my iPhone 4, even though it was taller and sported a bigger screen. But while the iPhone’s weight feels reassuring, something about the Fascinate’s build quality felt immediately fragile.

None of the carriers have announced their release dates and pricing yet, but we’ll definitely see some concrete details soon. The Galaxy S phones are definitely the most ambitious attempt at a coordinated Android strategy, and it’ll be interesting to see if other cellphone manufacturers come up with similar plans. US Cellular will also be getting a model of its own later this year.