Samsung captured a staggering 95 percent of the $5.3 billion in Android smartphone profits in the first quarter of 2013, according to a new report from Strategy Analytics.

This isn’t even a race.

Second place is LG, with 2.5 percent of the device profits from Android smartphones, and third place is “Other,” with everyone else lumped in to a tiny 2.7 percent share.

“Samsung is, for now, the undisputed king of the global Android smartphone industry,” Neil Mawston, Strategy Analytics’ executive director said in a statement. “We believe Samsung generates more revenue and profit from the Android platform than Google does.” 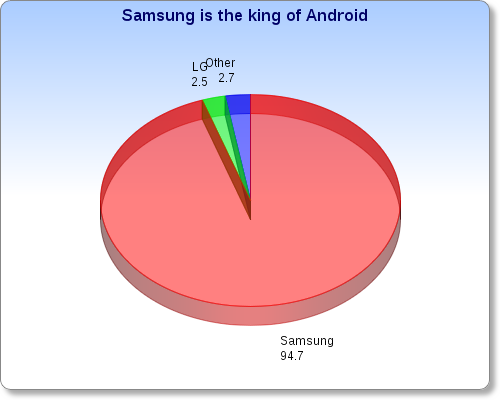 Globally, Android smartphones accounted for 43 percent of the overall smartphone industry’s profits, the report says. Those profits reached $12.5 billion in just the first quarter of 2013. And due to an ultra-efficient supply chain, “sleek products,” and successful marketing strategies, Samsung has captured almost all of that 43 percent, or $5.1 billion.

Now the question in the Android ecosystem is this: Is Samsung more powerful than Google?

According to Strategy Analytics, perhaps.

“Samsung has strong market power and it may use this position to influence the future direction of the Android ecosystem,” Mawston says. “For example, Samsung could request first or exclusive updates of new software from Android before rival hardware vendors.”

Samsung, which shipped 400 million phones in 2012 and 82.2 million phones, tablets, and laptops in the first quarter of 2013, is clearly on a roll. Android has 75 percent global market share, and Samsung has a massively dominant position within the Android ecosystem.