Samsung is spinning out five new startups from its in-house Creative Lab (C-Lab), an innovation program that gives workers a canvas for developing ideas away from their core roles at Samsung.

When an idea is chosen to progress to C-Lab, employees can take a year away from their regular post to work on it.

As a result of this, 18 Samsung employees have resigned from their positions at Samsung to become founders of the five new firms — and we’ve actually had a glimpse of at least one of these companies before. 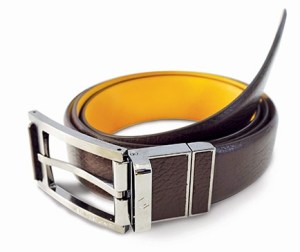 Above: Is it a belt or a Welt?

Though C-Lab has been operating for about four years, the Korean tech titan only gave a first sneak peek at CES this year, showcasing a handful of early-stage products from the project. One of the products teased was the Welt — a “discreet” device that’s worn around the waist and can monitor waist size, eating habits, and steps taken. It then serves up a bunch of weight-management plans.

Alongside Welt, other new standalone companies to emerge from Samsung include a mobile app called Locksa that “manages photographs with your smartphone unlock function,” a piece of software called Save Energy Cost that “recommends optimal electricity pricing systems,” and a new vacuous insulator, referred to as “Samsung Insulation,” which claims to offer higher insulation efficiency than any alternatives. 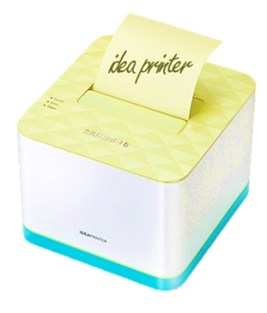 Samsung has also spun out a consumer hardware company that’s making an intriguing product called Idea Printer, which pretty much does what it says on the box — it prints out thoughts that enter your head. Presumably, it will rely on some form of smartphone app rather than telepathy.

In terms of what Samsung garners from these startup spinoffs, well, it’s safe to bet that the company will be a shareholder in the startups, at the very least. But Samsung is adamant that the program is about more than that — it’s about fostering a spirit of innovation across its workforce. “Through the promotion of startup companies, Samsung Electronics expects to stimulate a spirit of entrepreneurship in all employees,” the company said in a statement.

The five new private entities showcased by Samsung this week aren’t the first to emerge from C-Lab. At Mobile World Congress (MWC) in February, Salted Venture teased a new smart shoe aimed at giving athletes and their coaches access to more data on performance. The IOFITs have sensors embedded for real-time insights, such as the amount of force being exerted by an athlete on various parts of the foot.

“This year is the fourth year since C-Lab was initiated,” said Lee Jae Il, director of Samsung’s DMC R&D Center. “To date, we have had 130 projects with 480 employees participating. Among those, 40 projects have been transferred to a business division to be developed as commercial products.”

While details on these newly spun out companies are still fairly scant, Samsung notes that we can expect to see products hit the market in the second half of 2016.