When it comes to smartphones, Samsung’s Galaxy S series has been viewed as being more for consumers, while the company’s Note brand appealed to those interested in productivity. So following the termination of the Note7, one of the questions has been whether the Galaxy S8 would step in to fill the void. While the company has integrated many of the Note7’s best features into the S8, the S Pen is noticeably absent. But those looking for more productivity features should rejoice, because Samsung has created DeX, a docking station that turns the S8 into a desktop PC.

Samsung boasts that DeX — similar to Microsoft’s display dock — will allow you to leave your computer behind and use one device to handle work and personal matters in any setting. With a plug-and-play setup, you insert your Galaxy S8 or S8+ smartphone into the dock and use it just like a PC — using Android apps as you would on a PC, similar to the new Chromebooks that support the Google Play store.

Above: The Samsung DeX dock has an HDMI port, two USB ports, and an ethernet port.

Samsung DeX is shaped like a large hockey puck, equipped with an HDMI port for newer model monitors and two USB ports to support accessories such as a mouse and keyboard. There’s also an ethernet port so you won’t have to drain your data plan or use Wi-Fi, and a USB-C port to charge your phone.

The desktop experience promises to be very similar to that of Microsoft Windows on a PC. Samsung said that you’ll be able to resize windows instead of having a mirror image of what you see on the phone. When enabled, an app tray appears in the bottom left of the screen, showing you the programs you have on the S8, while on the bottom right you’ll find live settings and notifications, just like you’d get normally through your phone. Because it’s supposed to be representative of a desktop experience, if you right-click on the screen you’ll see a contextual menu window. And DeX offers multitasking capabilities. 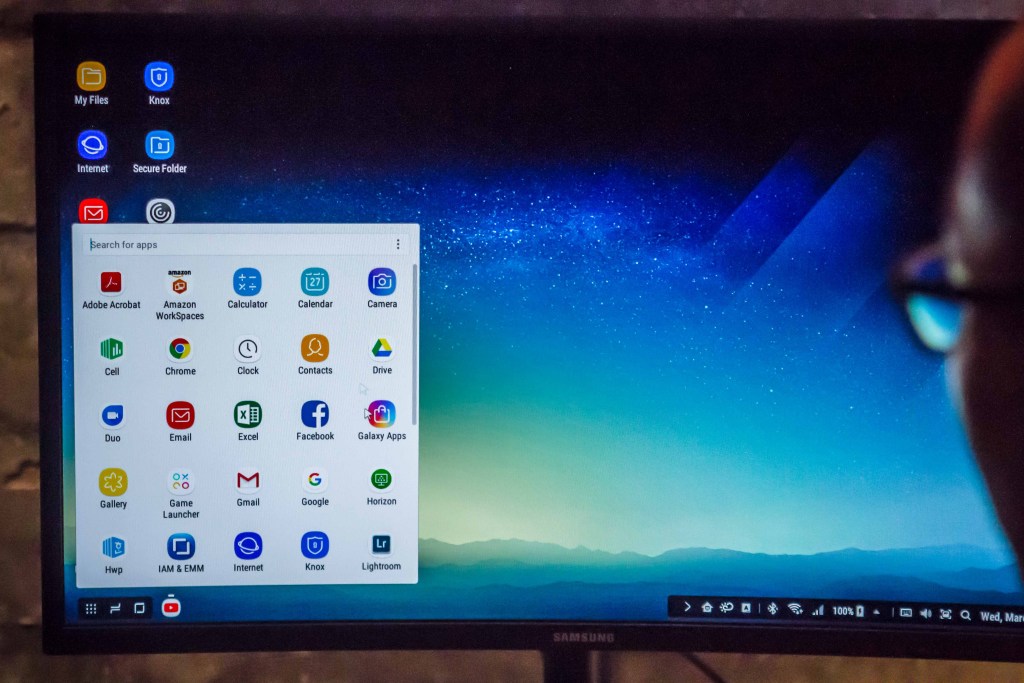 Above: What your Samsung Galaxy S8 looks like when using the DeX dock.

Samsung has partnered with Adobe and Microsoft to offer native support for Lightroom, Word, Excel, and PowerPoint software. And for those in the enterprise who want more, Samsung also supports virtual desktop solutions such as Citrix, VMware, and Amazon, and, of course, its Knox security platform.

“VMware and Samsung share a common vision of helping Galaxy S8 users experience the full capabilities of the device while delivering an elegant end-user experience,” said VMware senior vice president and general manager Sumit Dhawan. “Our expanded partnership will further enable business users to remain productive by delivering a unified digital workspace experience with continuity from a desk with a monitor, keyboard, and mouse to the palm of their hands with touch and gestures, elevating the experience of mobile workers to the next level.”

“It’s a very simple and convenient solution,” a Samsung spokesperson said. “You take the Galaxy S8 device, dock it into the DeX station, and in a matter of seconds, the Samsung experience will load on the bigger screen.”

Since it’s designed to mimic the experience you’d get from the Galaxy S8, you’ll also be able to take advantage of the phone’s security features, including iris scanning and facial recognition. And if you have a video conference with someone, you’ll look at your phone, not at your monitor. 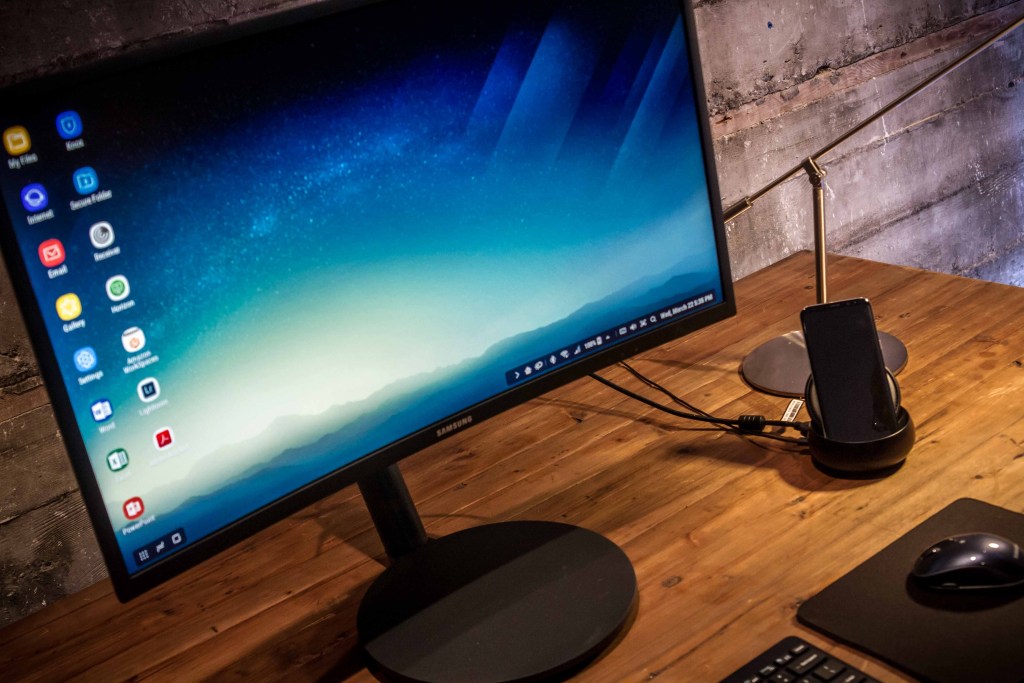 Above: A workstation where the Samsung Galaxy S8 and DeX dock are in use.

Samsung DeX is aimed at business professionals, those who don’t want to be burdened by carrying around a laptop and tablet when a smartphone will suffice. Futurist Ray Kurzweil once opined that technology experiences exponential growth and highlighted the fact that the current smartphone is more powerful than computers were when he was an undergraduate in college. We’re already seeing this principle at work with people doing more on their mobile device than on their computer.

There could come a point when those working remotely only need a Galaxy S8 and a Samsung DeX in the office to get things done. Or business travelers will be able to connect the hotel room’s television to the docking station and use it as a monitor.

While pricing and availability of the Samsung DeX have not been revealed, there are reports suggesting it’ll cost between $100 and $160.