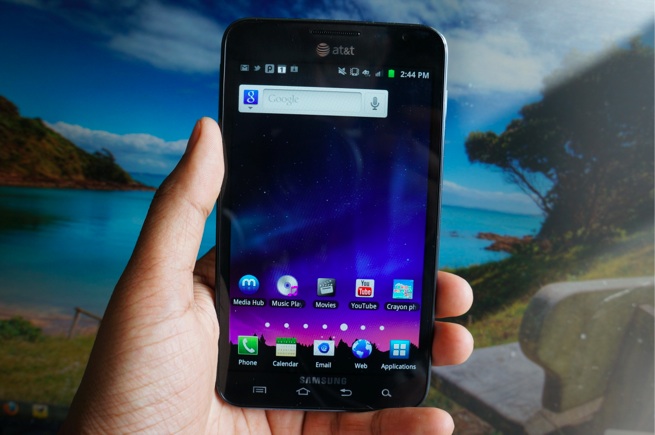 More than three years after Android launched, all too many Android devices look the same. But you can’t say that about Samsung’s mammoth Galaxy Note.

It’s far from a perfect phone, but it’s among the most interesting I’ve seen recently.

With its 5.3-inch screen, the Galaxy Note ($300 with contract on AT&T) sits somewhere between a phone and a tablet.

Samsung didn’t just dare to be big with the Galaxy Note, it also resurrected the stylus, a remnant from the Palm Pilot era of mobile computing, and gave it a place of prominence.

While an oversized phone with an archaic input mechanism doesn’t exactly sound like an iPhone killer, the Galaxy Note has enough going for it that it deserves a second look. That is, as long as you don’t mind looking like a huge dork while using it.

The Galaxy Note sports Samsung’s largest Super AMOLED display yet, clocking in at 5.3 inches with a 1280 by 800 display (which means it can display 720p HD video at full resolution). As is typical for a Samsung display, the Note’s screen is uniformly gorgeous, featuring bright colors and deep blacks. When it comes to viewing photos or video, the Note resembles a tablet more than a smartphone, which works to its advantage.

The Galaxy Note’s unassuming stylus, dubbed the S Pen, is its other major selling point (it’s not called the Note for nothing). Powered by Wacom technology, the S Pen allows you to treat the phone just as you would a typical notebook with Samsung’s S Memo app. You can jot down text, pictures, or whatever your heart desires.

The S Pen offers 250 levels of pressure, which could make it very useful to budding artists, and it also sports a button for added functionality. You can, for example, hold down the S Pen’s button in any app to pull up a miniature version of S Memo. You can also take quick screenshots by holding down both the stylus’ button and S Pen itself on the screen. It’s also useful for games where you need a bit more accuracy, like Fruit Ninja or Angry Birds.

I found the S Pen was more useful for drawing than writing, though I’m sure the latter would come easier with a bit of practice. Ultimately, the S Pen can never be as smooth as pen and paper, since you’re literally attempting to write on glass.

While the S Pen has issues (more on those below), it’s the sort of unique addition I hope to see more of from Android manufacturers. Samsung could easily bring the S Pen to future mobile devices, and it would be even more useful in one of the company’s larger tablets. Samsung tells me that the S Pen requires additional hardware to function, so it won’t be backwards compatible with existing devices. 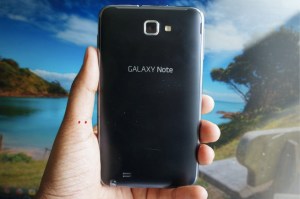 In a way, the Galaxy Note fulfills the promise of Microsoft’s ill-fated Courier project. The Courier was supposed to be a dual-screen tablet that relied heavily on a stylus, resembling a sort of digital Moleskine notebook. The Galaxy Note is more notepad than Moleskine, but it’s still nice to see a device pushing mobile interaction forward (even if it’s bringing back an accessory from the past). Sometimes, you just need more precision than your fingers can provide on a multitouch screen.

The Note also supports AT&T’s LTE 4G network, which allows the device to reach some shockingly fast speeds. While testing the Note around Brooklyn and Manhattan, I saw download  speeds between 12 Mbps and a whopping 45 Mbps (faster than the premium cable Internet service I use at home). Upload speeds hovered between 2.5 Mbps and 10 Mbps. While these numbers may seem to blow away Verizon’s typical LTE speeds, AT&T is likely helped by the fact that it only has a handful of LTE devices out and not too many 4G customers hogging bandwidth.

The Note’s camera performance was about on-par with Samsung’s current high-end lineup. It took colorful and clear photos, and the 1080p HD video recording looked sharp (though still not as great as the iPhone 4S).

Battery life on the Galaxy Note was surprisingly robust thanks to its large 2,500 mAh battery, which is significantly bigger than typical smartphone batteries. (Still, it’s surprising Samsung wasn’t able to squeeze in the 3,300 mAh battery used in the Droid Razr Maxx.) I was able to use the device for an entire day on LTE without needing a recharge. That’s a good thing, since LTE is typically a huge battery drain on smartphones. Unfortunately, the phone also tends to lose a significant amount of charge overnight, so be sure to keep it plugged in before you hit the sack.

The Bad: Crushes your puny ego 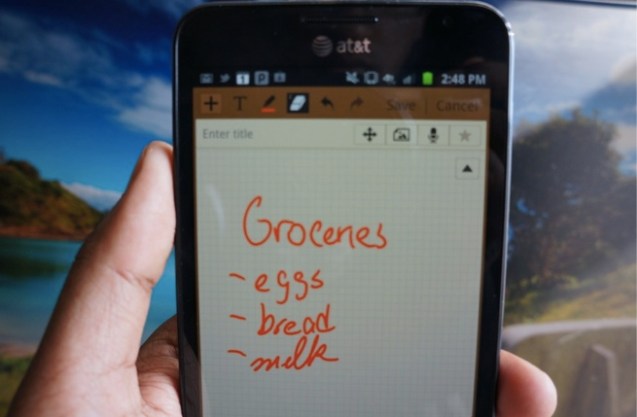 As a mobile computing device, the Galaxy Note offers the best of both the tablet and smartphone worlds. As a phone, it’s a bit of a mess.

Samsung was vague about the Note’s exact role when it announced the device, but now that it has finally hit the U.S., it’s clear that the company is presenting it as a phone. The problem is that as a phone, it’s just too big. The Galaxy Note is far better suited to being held in both hands like a tablet, rather than being held one-handed like a typical smartphone.

For one thing, it’s a pain to hold up to your ear for extended conversations (it makes me long for the slightly concave screens of the Galaxy Nexus and Galaxy S). Call quality sounded fine, but it’s hard to forget you have a huge slab of glass pressed against your face. If you’re primarily using a Bluetooth headset or headphones with a built-in microphone, the Note’s unwieldiness may be less of an issue.

It’s also impossible to use the Note as a phone and not look like a major dork. While plenty of smartphones sport screens between 4 and 5 inches, the Note seems to pass a magical threshold with its 5.3-inch display that instantly makes you look uncool. Instead of projecting the aura of a modern smartphone, the Note feels more reminiscent of Gordon Gekko’s iconic and ancient Motorola DynaTAC. The S Pen doesn’t help the situation, as it instantly makes you look like a throwback from the PDA era.

You’ll certainly get some attention when using the Galaxy Note — just don’t expect all of it to be favorable.

I’m also not entirely sure how Samsung reps managed to create neat hand-written notes on the phone, as I found it to be mostly frustrating. It could just be that my handwriting is terrible, or as I mentioned above, it may require a bit of practice. But the S Pen undoubtedly has trouble when it comes to accurately writing letters next to each other. Partially it’s related to the glass separating the stylus from the screen, but there’s also a noticeable delay before your swipes translate into on-screen results.

I’m hoping that future devices featuring the S Pen can smooth out its current issues, as it has the potential to be a truly powerful accessory.

Another big downside to the Galaxy Note right now is that it ships with Android 2.3.6, and not the much-hyped Android 4.0 “Ice Cream Sandwich.” AT&T says it will offer the ICS update at some point, but hasn’t clarified when. At this point, you’re taking a gamble with the Galaxy Note’s Android updates, but that’s also true for many other Android phones.

It’s unclear who Samsung is aiming at with the Galaxy Note, and that may be its biggest problem. It’s too large for most hands, and hardcore note takers will still prefer the feel of pen on paper. At the same time, it’s nice to see a new Android phone that looks completely unlike any other.

The real question: Is it worth your hard-earned cash? The Note is too large and complex to satisfy smartphone newcomers, and those with more refined tastes will likely lean towards the iPhone 4S and Galaxy Nexus. That leaves a small portion of viable users for the Note.

The Note may not be a home run for Samsung, but interesting elements like the S Pen show that the company can still innovate beyond its more sluggish Android competition.