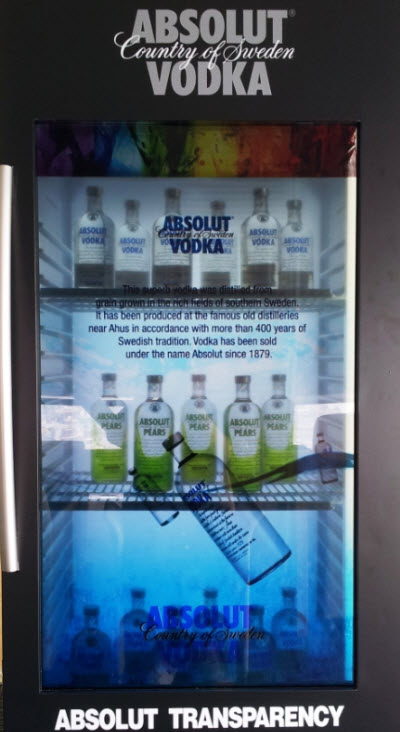 Samsung showed off a cool transparent liquid-crystal display at the Consumer Electronics Show a week ago. The 46-inch screen will begin shipping this month to retailers who can use it to draw attention to their storefront windows.

It may sound crazy to put a display on a window, particularly one that could get smashed. But the transparent display market is expected to grow from $900 million in 2015 to $87 billion by 2025, according to Display Bank.

“We look at it as a smart window,” said Bill Beaton, senior manager for LCD marketing at Samsung, in an interview. “You can think of jewelry displays with it or freezer windows at the grocery store that tell you where to find the ice cream. ”

The touchscreen could turn what were once boring window displays into interactive experiences and pump new life into the LCD business. It has a contrast ratio of 4,500:1 with high-definition resolution (1,366 x 768 pixels) and a 70 percent color gamut, which means it is as vivid as a lot of TVs in displaying color.

It has a TFT display and is 46 inches. Samsung introduced a 22-inch version last year that is just beginning to make it into stores such as jewelry and luxury vendors.

The display is 9 millimeters thick and weighs about 10 pounds. Samsung says it could be used in product showcases, commercial freezer doors in grocery stores, and platform doors of subway stations. It can also be used in other work or home applications including electronic boards, information windows, medical equipment, electronic signs, and, once the displays get smaller, mobile devices. Samsung also showed off a prototype laptop with a transparent display as well as a tablet.

Pricing isn’t available yet but the products will ship soon. But Beaton said the manufacturing process is not particularly complicated for the transparent displays, as they can be made in the same factories as other LCD displays. It’s not unlike a technology showed off by General Motors for car windows. Here’s a video of the display.