It’s not often you can combine buzzwords like virtual reality and esports in the same business. But Sansar has done it by enabling esports contests to be viewed in VR.

Linden Lab, the San Francisco maker of Second Life and Sansar, has partnered with multiple professional esports teams in the Overwatch League. Sansar is working with the Houston Outlaws and the San Francisco Shock teams, taking fans beyond the two-dimensional chat that streaming allows.

With social VR, Sansar enables fans to interact one-on-one with popular players and personalities, stream matches in virtual watchspaces created by their favorite teams, and show their support through exclusive branded merchandise.

Sansar’s latest offering arrives right as the global demand for esports reaches a new peak. Investments continue to pour into the space, and while teams everywhere face increased pressure to deliver memorable fan experiences, VR has remained noticeably absent from the broader conversation.

The fans can use Sansar on both PC and VR to connect in their team’s branded virtual watch space, tune into live stream matches, and buy custom skins and merch. Other features coming soon include real-time stats integration, in-match player audio sharing, and more.

“We’ve seen a real need in the esports market for a deeper, more engaging fan experience – something that can go beyond normal spectatorship to really draw people in,” says Ebbe Altberg, CEO at Sansar, in a statement. “We feel social VR is perfectly poised to meet this need, and we’re thrilled to find forward-thinking esports partners that feel the same – trailblazing teams that recognize VR’s potential and are willing to evolve and innovate to deliver world-class experiences. Their investments in Sansar are investments in their communities.” 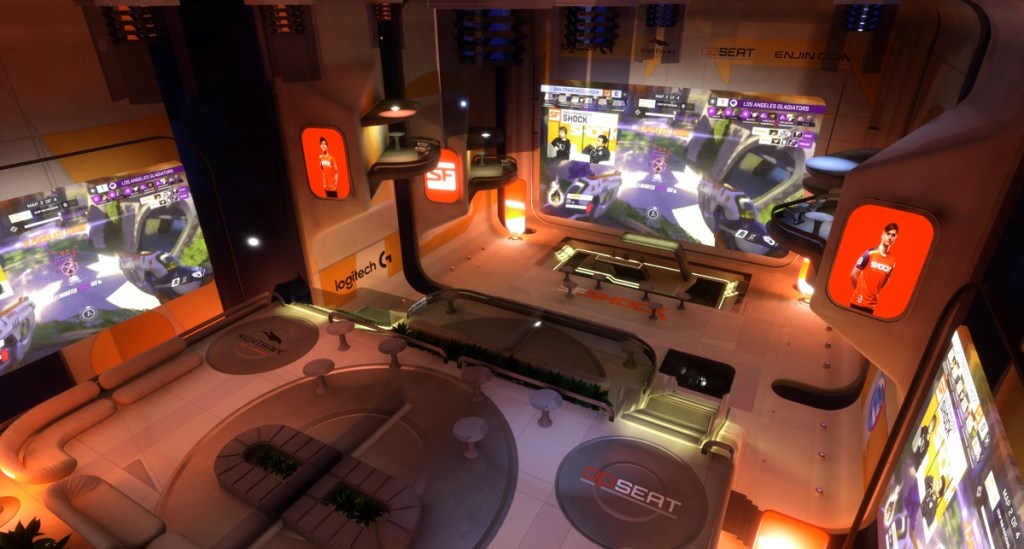 Above: Fans can do meet-and-greets in Sansar with the San Francisco Shock.

Houston Outlaws team owners Infinite Esports and Entertainment has worked hard to elevate Texas’s profile as an esports destination. It partnered with the city of Arlington on a multimillion dollar esports venue, and the owners are collaborating with Sansar on a one-of-a-kind fan experience: the Hideout.

The Hideout is the first-ever virtual clubhouse for esports, available exclusively in Sansar. The team plans to unveil the space in VR at an IRL event: the Outlaws 2018 Block Party, May 18 to May 19 at the Coral Sword.

Fans unable to attend can access the virtual space starting at 4 p.m. Pacific time on May 18, where they can tune in for a live stream of the event, along with other exclusive interactive events, trivia, fan giveaways, and more.

Above: Houston Outlaws in VR

The San Francisco Shock’s owners, NRG, is working with the University of California, Berkeley, to develop a new esports community center, and the Shock’s partnership with Sansar will enhance the visibility of the team.

The team plans to unveil the space in VR and IRL simultaneously at the 2018 eSports Extravaganza – Friday, May 25th, at the Computer History Museum in Mountain View, California. Fans unable to attend can visit the arena in Sansar starting from 6 p.m. Pacific time.

“We see these spaces and partnerships as the first ripples in a bigger wave,” said Altberg. “Gamers today need more than just 2D chat to connect and communicate, and we’re thrilled that Sansar can serve as their go-to esports destination – a place where players can interact more closely and directly with fans from around the world.”

Linden Lab was founded in 1999 and it launched the virtual world Second Life in 2003. It launched the Sansar social VR platform in 2017.

Update: Sansar does not have a formal partnership with the teams or the Overwatch League. Sansar conducted preliminary discussions with the San Francisco Shock and Houston Outlaws to create VR watch spaces, but the previously announced activities are not moving forward at this time as there was a misunderstanding.