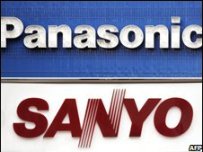 Massive battery-maker Sanyo Electric is looking to be acquired by Panasonic. If the acquisition happens, the result will be an almost invincible force in the energy-storage space. Now, to make itself even more attractive to Panasonic, which has made several bids for the company over the past few weeks but none high enough to seal the deal, Sanyo is hiking its investment in the solar and automotive battery segments of its business.

The shift may have been motivated by Panasonic’s latest offer for the company — which came in lower than Sanyo had anticipated. Sanyo says it plans to grow its solar operations to 600 megawatts of capacity by 2011. And because it makes its own silicon, it may be able to make finished-product solar panels up to 33 percent cheaper by the end of 2010. This announcement follows $83 million Sanyo sunk into solar earlier this year.

Even as it ponders a sale, Sanyo says its goal is to become the number one supplier of auto batteries in the market as electric vehicles and plug-in hybrids roll into showrooms next year.

Panasonic has also made claims on this title, announcing earlier this month that it has found a way to merge lithium-ion cells usually used to power laptops into cheaper, more efficient packs capable of running cars. Shortly after, it was tapped by Tesla Motors to produce battery packs for its Model S sedan out in 2011.

Buying Sanyo — which just announced a battery supply deal with Peugeot — would not only knock another major competitor out of this space, it would strengthen its own technology offerings.

It might also give Panasonic entree into the storage for Smart Grid business. In order for solar, wind and other intermittent renewables to gain mass-market traction, the new more efficient Smart Grid will need to be able to store their generation over long periods. Sanyo is actively working on this problem, focusing particularly on solar. Panasonic has yet to take advantage of these opportunities.

A merger between the two giants could spell disaster for new players in the space like the recently public A123Systems (which has yet to record a profitable quarter) and its peers like Johnson Controls-Saft and Ener1. Starting as promising startups focused almost exclusively on the automotive battery market, they can’t match Panasonic and Sanyo’s resources.