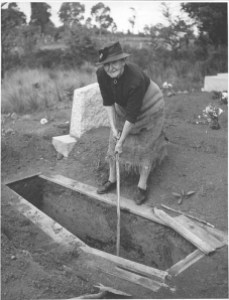 Above: Nothing to see here, just digging me own grave

Step back for a moment and think about what AOL paid for TechCrunch and The Huffington Post last year. Somewhere in the realm of $350 million dollars. Today Sarah Lacy, formerly one of the top writers at TechCrunch, debuted her new site, PandoDaily. Want to guess who is coming to write for her? Former TechCrunch folks like Mike Arrington, M.G. Siegler and Paul Carr.

Why exactly would AOL pay so much for editorial properties, only to let the big name writers on the masthead walk away to start competing publications? It seems like Tim Armstrong doesn’t know how to drive a hard bargain. You want to talk about a painful irony — through Mr. Arrington’s Crunchfund, which is a backer in PandoDaily’s $2 million investment round, AOL is now literally funding its own competition.

A similar situation is developing in New York with the crew at Soho Labs. Former Huffington Post chief technology officer Paul Berry, widely acknowledged as the brains behind HuffPo’s top notch SEO and early use of social tools, has left AOL and joined up with Ken Lerer, Eric Hippeau and Greg Coleman, all former high ranking members of the Huffington Post, who were handsomely rewarded when the site was purchased by AOL.

The group is working on the next generation of tools for social and viral news, the kind of features that made Huffington Post so attractive as a news brand. And they are doing it with help from Jonah Peretti, another founding member of HuffPo. Meanwhile Mr. Peretti is building his new startup, BuzzFeed, into a direct competitor to The Huffington Post, hiring top notch political reporters to compete for HuffPo’s bread and butter, the news cycle during this upcoming election season. It all prompted veteran media watchers to speculate. “How do you pay $315 M. for HuffPo and not keep the CTO locked up?” asked Peter Kafka.

Rafat Ali, the founder of paid content, sees it as a painful trend. “An AOL specialty, they never lock anyone. Or can’t. Ask Tacoda, Bebo, Sphere.”

Image via the National Library of Australia