SayNow, a Palo Alto company that provides a free calling service to bands on Myspace to stay in touch with their fans, has raised $7.5 million in venture capital.

For now, it’s difficult to see how SayNow can make serious money from its model. Free calls?

To recap, the service (previous coverage here) offers bands a dedicated phone line, allowing them to leave a voice message for their fans. The musicians do this by placing a widget on their Web site, listing a unique phone number. Fans can call and listen to the message, leave messages for the band, and register to get updates. The musicians can give the number out at concerts — and the one-to-many relationship is made very easy. (See screenshot below for example of a Web page widget for Alicia Keys).

But with phone calls extremely cheap, and with musicians having many voice-message alternatives for outreach, how does SayNow plan to make money — the boatloads of money that venture investors pine for?

Chief executive Nikhyl Singhal explains that the trick is to take a cut of advertising in audio ads played during the voice recordings. SayNow will also let musicians pitch a ringtone to their fans. They’ll talk about their latest song, and offer fans a way to download a ringtones version of it. Fans press “1” to buy the ringtones, for say $2.99. SayNow might get 25 cents of that. Singhal says between 20 and 50 percent of fans are actually buying the ringtones in tests.

The company isn’t disclosing revenue, but it’s cutting revenue sharing deals with musicians — now that it has tested its platform for a year. The ringtones sale feature is still being tested, however, with revenue share contracts to begin next month, Singhal says.

SayNow has 870,000 subscribers, or fans who have opted to receive messages from musicians. Certain musicians get a lot of calls. Chris brown, for example, had 25,000 callers in five days after publicizing his number. If you do the math, even that volume isn’t robust enough to build a great business on. The advertising rates are relatively high: Advertisers pay $20 and $60 per a thousand calls. That’s good, but SayNow only gets a cut of that, and gives most of it to the publisher.

SayNow competes with companies like Snapvine, which gives out a single number, and then provides individual extensions for each artist. That company has sought to drive adoption among individual users, directing them to register at the site to get their own Web widget too. That company says it has millions of users. Mozes, another competitor, lets bands give out a text code to stay in touch with fans. 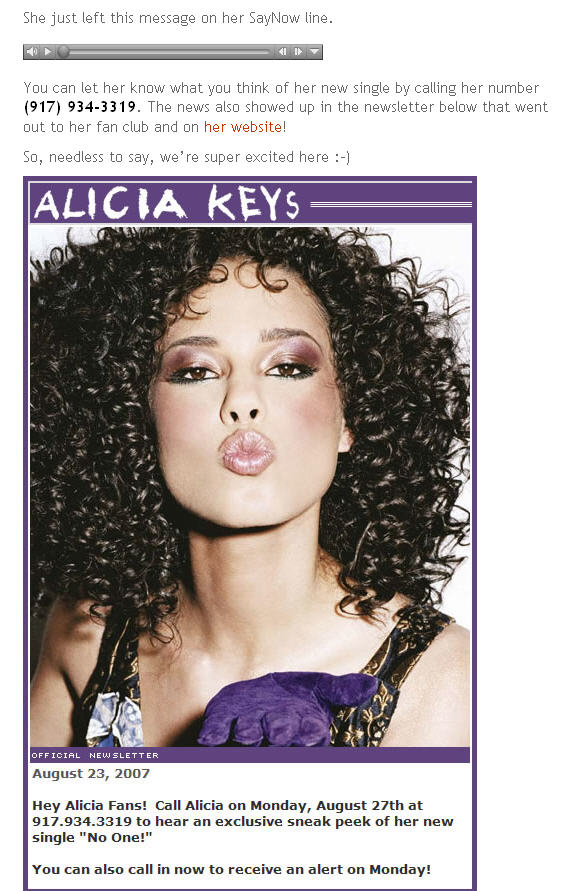