Like a lot of other companies, Sayollo is putting advertisements inside mobile games. But the Israeli startup has a different approach, as its ads are on billboards that look like they belong inside the game world.

The Rehovot, Israel-based Sayollo has figured out that gamers appreciate ads that aren’t intrusive. But if they put a video ad or a static ad on a wall inside a game environment, it doesn’t look fake. Rather, it adds to the realism for a gamer to see a billboard ad in a racing game or an ad on the side wall for the pitch in a soccer stadium. This works particularly well for brand advertisers who want to reach gamers, said Sayollo CEO Jonathan Attias in an interview with GamesBeat.

This takes me way back to the days of Massive, IGA Worldwide, and Double Fusion — the early startups that tried to bring in-game ads to console and PC games a decade ago. But Attias said that his company is focused solely on mobile in-game ads. Here’s a video of the experience, which shows the ads run for about six seconds. Those ads do not slow the game down, Attias said.

Above: Sayollo’s ad is the shoe in the upper right corner.

“The difference between us and them is that we are in the right time and the right price with the right product,” Attias said. “We are the only company with the ability to play a video ad on a billboard inside a game. Most of the other competitors are doing video ads based on banners and static ads. We see brands are looking to connect with the young generation.”

And Sayollo boasts more than 11 million daily active users who see its ads. 48% of those are female. The nice thing is that Sayollo isn’t pissing off those users with ads. 94% of mobile games use ads now, but the most common complaint is that the ads are annoying.

“We have signed agreements that let more than a million people see our ads in a day,” Attias said. “All applications are looking to monetize now, and in-game advertising is a buzzword.

Above: Sayollo’s video ads flash the Mastercard logo in a baseball game.

Color Switch, one of the biggest hits of the mobile era, is using Sayollo’s in-game advertising platform inside its game. And Sayollo also said that gaming enthusiast firm Razer plans to use Sayollo to deliver an in-game advertising campaign targeting mobile game players.

Meanwhile, Andy Wing, former general manager of sports and entertainment at American Express and former chairman of Nielsen EDI, has become a member of the advisory board for Sayollo. Wing joins Mike Vorhaus, the CEO of Vorhaus Advisors, a digital and gaming analyst in the U.S., as an advisor to Sayollo. The advisors are helping Sayollo sign up game companies to integrate its tech into their mobile games.

Attias said Sayollo is reaching millions of players per month in mobile games through the network. Sayollo also has a number of well-known brands advertising on the platform, and that is helping the company increase its revenues, which are shared with the game publishers.

A new technology for an old idea 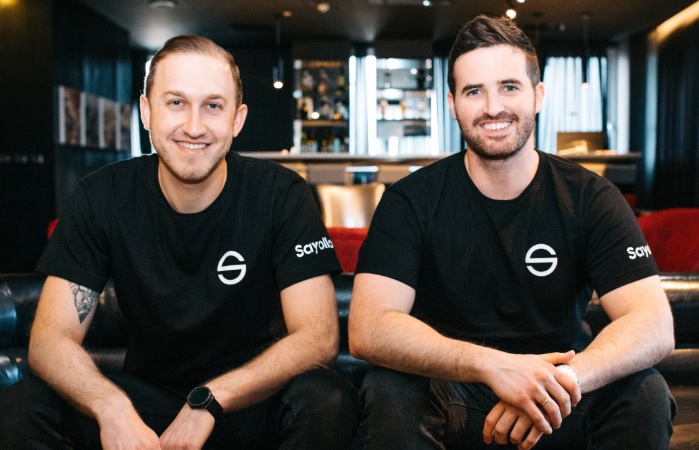 Above: Eitan Norel and Jonathan Attias (right) and of Sayollo.

Sayollo developed a unique technology that makes it possible for video ads to be displayed during the game. The ads are displayed via internal objects, which are strategically placed to catch the user’s attention and target the user’s emotions.

Ads show up only when the player is experiencing a positive emotion and open to receiving a brand’s message. In this way, marketers can penetrate the player’s conscious mind and ensure high engagement between the player and the brand, Attias said. This is achieved while doing no harm to the user experience, and that casts the advertiser in a distinctly positive light.

Sayollo uses AI software to figure out how to dynamically insert brand advertising inside a game, while not obscuring the gameplay. It uses non-clickable ads, so the ads don’t take the player out of the game experience.

Customers using the ads include BoxiSoft, Azur games, AGN, Ace Viral, Ilyon, Oops 11, ColorSwitch, and 24 more companies. Attias said his company is talking to bigger game companies, and it is also courting brands. The company is working on a case study with Nielsen, which measures the results of ads.

Above: Sayollo’s billboards are alongside the race track.

Sayollo has 17 employees and is hiring. Attias cofounded the company with Eitan Norel two years ago. They had technology backgrounds and worked in the performance-based ad business.

“We understood that the need for games to be positive in return-on-investment, and how user acquisition worked,” Attias said. “We understood that something needed to be changed. So we started to look at the brand activity inside mobile games, and that became our main focus as a company.”

One of the things that will help with mobile connectivity and the smoothness of running ads is 5G networking.

“That will help us stream video ads at better quality,” Attias said.