Scanscout, an online video advertising company, has raised an undisclosed amount from Time Warner — yet another large, old media company investing in a video startup.

The Boston, Mass. company is part of a new crop of startups seeking to help advertisers to place their ads contextually within videos (screenshot of company demo, below). 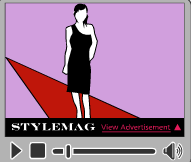 Scanscout competes most directly with other startups like Adap.tv and EveryZing, two other recently-funded startups that claim to have market-leading technology for placing contextual advertising in videos.

Scanscout displays “in-line” advertising that appears as a banner at the bottom of a video as a user watches it. If a user clicks on the ad, they’ll be taken to another page with more information from the advertiser. Scanscout tracks visual and audio patterns in a video, as well as relevant information on the web page, to calculate the most relevant advertising. So if you’re on a soccer fan site watching a World Cup highlight video with an announcing shouting “gol” every ten seconds, chances are you’d see an ad button for say, a movie about soccer.

Adapt.tv, which raised $10 million in July, uses similar measurements to calculate which ads to place with which videos. It also tracks which kinds of ads users are clicking on the most to serve up more of those kind of ads.

EveryZing, which raised $10 million in June, uses a somewhat different method: It creates transcripts of audio speech in a video, then searches this text to figure out where context fits best.

Online video companies of all sizes are working on similar problems. Videoegg, a provider of a broad range of video advertising services and which raised $15 million last week, also offers such in-line ad services.

YouTube, the clear market leader in online video, beginning to experiment with its own in-line ads.