Sckipio Technologies is coming out of stealth mode today to announce it has raised $10 million in a new round of funding to create chips that will deliver faster broadband to the world over standard phone lines. Funding for this kind of chip company is increasingly rare, as it has become harder and harder to bring semiconductor chips to the market without spending tons of money.

But that tells you how strategic Sckipio could be, as it provides an essential ingredient in making telephone companies as competitive as cable TV providers in providing broadband Internet service to homes. Sckipio provides chips that enable Internet service providers to deliver fast broadband over the last mile to the home.

“Sckipio is poised to be the leader in G.fast,” said David Baum, cofounder and CEO of Sckipio Technologies. “The standard is now ready, and so are we. We’ve got a complete team with the relevant expertise in G.fast and the capital needed to deliver the right G.fast solutions quickly. G.fast will finally give telcos a great competitive weapon to fight against the cable service providers.”

Sckipio says that G.fast will help deliver speeds that are almost as fast as fiber-to-the-home at costs that are just 10 percent of fiber — a potential cost savings of $500 billion in lower deployment costs. The G.fast technology will be easier to maintain and install than other kinds of broadband technologies such as digital subscriber lines (DSL). G.fast will enable flexible upstream and downstream Internet delivery, making it easier for telecommunications firms to offer consumer high-definition video, backup service, telepresence, telemedicine, and cloud gaming.

“G.fast is the best hope for telcos to affordably deliver 1 gigabit per second to consumers,” said Oliver Johnson, the CEO of Point Topic, a leading broadband market research firm. “We expect G.fast to be broadly deployed quickly because telcos need an effective alternative to cable, and G.fast appears to have everything these telcos need to succeed.”

Baum said Sckipio expects to deliver G.fast products in 2014. Sckipio was founded in January 2012 and has 25 employees. Rivals include Huawei and Broadcom. Sckipio’s team came from home networking chip creator CopperGate, which was acquired by Sigma Designs in 2009. Baum is the founder of CopperGate, and his chief operating officer, Oren Mansour, was also an executive at CopperGate.

“It will take service providers at least a decade to break even on fiber to the home – if they ever do,” Baum said. “With G.fast, they should improve their return on investment by 400 percent and get to profitability within just a few short years.” 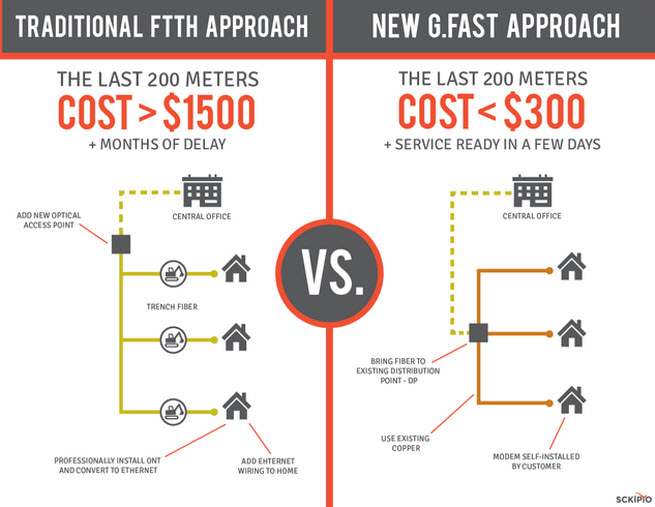