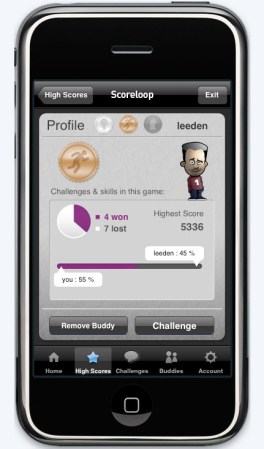 So many people are creating games for the iPhone that there’s cottage industry emerging to help them create their applications more easily.

The latest is Scoreloop, a Munich, Germany-based startup that has created a platform for developers to build social features into iPhone games. Today, the company is launching a software development kit that developers can use to add new multiplayer features.

I can see the logic. The chances of any developer producing a tremendously popular game on the iPhone are diminishing, because of extreme competition. But if you create a platform that becomes popular with developers, you get paid no matter whose games rise to the top. It’s like selling shovels to prospectors rather than digging your own gold mine.

These features include the ability to challenge other players to matches, compare scores and learn more about opponents on both your mobile device and social network of choice. Anyone who uses Scoreloop’s SDK can easily implement these features within any iPhone game. For example, when users purchase virtual currency for multiplayer games, the developer gets the fee and Scoreloop gets a cut.

The idea is that — with nearly 8,000 games available on the iPhone — developers have to do something to make their games stand out. Adding social features is a no-brainer way to make games more engaging and more likely to rise to the top of the list.

The system lets you invite real friends via social networks like Facebook. You can then challenge them to matches — or the system will match you with people you don’t know who have similar skills. Players earn points based on how well they play. With each win, a gamer gets coins and points. Coins let them play new challenges. Points reflect their skills and rankings. When gamers run out of coins, they have to repurchase them to play more multiplayer rounds. Right now, duels in the game are done asynchronously, or one turn at a time, and the game matches aren’t conducted live. Here’s a video that illustrates the system.

Of course, there are others besides Scoreloop that have caught on. Aurora Feint recently launched its own Open Feint tools with game developers. Viximo also launched its own social gaming tool for iPhone developers. Another rival is Geocade, which makes it easy to set up global high score leaderboards for games on a variety of phones.

Some game companies, like Zynga and Social Gaming Network, have created their own social platforms. But Scoreloop targets smaller developers who don’t have the resources or desire to reinvent the social gaming platform themselves. Scoreloop provides new revenue, better analytics and viral marketing for game discovery, said Marc Gumpinger, chief executive.

Gumpinger also said the company has tested the software development kit (SDK) and has made it available to some developers. The company was founded in Munich in the fall of 2008 and has received funding from German venture capital firm Target Partners. The company has 10 employees. Gumpinger said it will seek a new round of funding sometime in the fall.