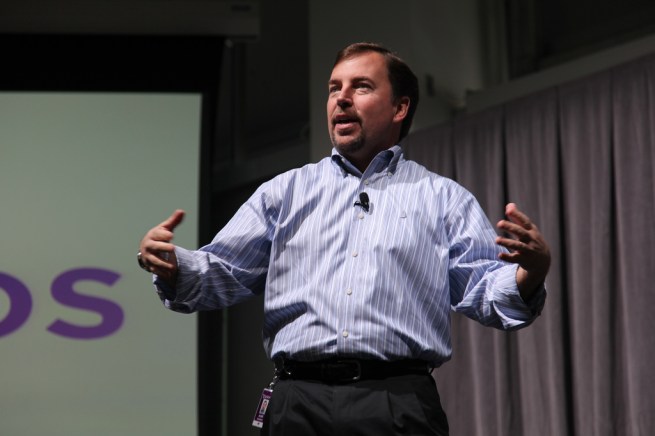 Update: Yahoo said in a statement Sunday afternoon that Ross Levinsohn has been named interim CEO, effective immediately. Fred Amoroso was named chairman of the board. The company also said that it has settled with Third Point. Daniel Loeb, Harry Wilson, and Michael Wolf will be joining the board as a result of the proxy settlement.

In the final chapter of the saga of the white lie turned black, Scott Thompson has stepped down as CEO of Yahoo.

Just over a week ago it was discovered that Thompson, the struggling media company’s CEO of four-months, had padded his resume and an SEC filing with a computer science degree he did not receive.

Now, after radio silence (at least externally) on the matter, Thompson is on his way out the door, the inimitable Kara Swisher at All Things D first reported Sunday morning. Yahoo confirmed Thompson’s departure in a press release put out Sunday afternoon.

Thompson was the frequent target of activist shareholder Daniel Loeb of Third Point, which owns 5.8 percent of Yahoo shares. Loeb and co. have staged a proxy war in an aggresive campaign to obtain board seats. Third Point actually unearthed Thompson’s bio lie, which Yahoo initially labeled as an “inadvertent error,” and called for the CEO to be fired. Now, it appears that Loeb will get his way in more ways than one.

“Yahoo is also near a deal with Third Point’s Daniel S. Loeb to end the hedge fund manager’s proxy fight,” the Times first reported. “Under the outlines of a proposed settlement, the activist hedge fund manager and two of his director nominees, Michael J. Wolf and Harry Wilson, will be seated on the board.”

Yahoo’s press release confirms the settlement and the board appointments. Loeb, Wilson, and Wolf will join the Yahoo board, effective May 16, 2012.

Thompson’s exit should come as no surprise to anyone following the drama. Thompson has done little to publicly address the resume faux pas, and the “it wasn’t me” excuse he used internally seems as plausible as Yahoo’s “inadvertent error” dismissal.

During his temporary tenure as CEO, Thompson spearheaded a corporate restructuring that saw 2,000 employees laid off. The shamed executive also initiated an on-going patent war with Facebook.

“Over the short term, this will be very painful for Yahoo and their employees. But like medicine, it’s tough to swallow, but better for the patient and Yahoo in the long term,” Moor Insights and Strategy president Patrick Moorhead told VentureBeat. “Yahoo never got a good start with Thompson, where he led a very backward strategy process. He started with layoffs, then reorganized, then set out his six points of strategy without context of a vision. The new CEO needs to start with a clear vision of what they want Yahoo to be and where they want Yahoo to lead, then plan and execute to that direction.”

Yahoo did not immediately respond to a request for comment.