Sea of Thieves is one of the biggest Microsoft releases of 2018, and during our conversation at the Electronic Entertainment Expo trade show, executive producer Joe Neate was quick to point to a wall of stats that all highlight exactly how big of a deal the online pirating simulator is. It has had 4 million players, a quarter of a million people all playing at once, and an average play time of nearly 23 hours per player. But Sea of Thieves is rapidly moving from successful launch into a support phase where developer Rare must keep dedicated fans happy with new content while also continuing to bring in new players.

I spoke with Neate about how Rare can support Sea of Thieves and a number of other subjects for a half hour last week. One of the aspects of development that he touched on most was responding to what players want, and then using data to see if the tweaks, updates, and content drops are addressing those concerns. And he explained that the studio is already seeing massive shifts in the way players are approaching the game after the launch of The Hungering Deep, which is its first free add-on.

“Our telemetry tells us that ship encounters ending in battles halved during Hungering Deep,” said Neate. “So we made our game twice as friendly during that time period.”

The Hungering Deep introduces the speaking horn, which is a new tool that enables players to communicate across the water with other ships. This is important because the add-on content introduces the megalodon shark, which requires at least two crews to take down.

Prior to The Hungering Deep, Sea of Thieves only encouraged one kind of interaction with other players’ ships, and that was combat. Unsurprisingly, that resulted in most people firing on other ships immediately. But Rare wanted to experiment to see if it could get players to work together, and that’s where it came up with the idea for the speaking horn.

Of course, you might think that giving players who would fire on each other a way to yell at other ships is a recipe for trolling and harassment.

“If you give players reasons to be good, they will be,” he said. “I’ve always strongly believed that. If you put players into a completely competitive environment, they’re generally going to use any advantage they can, any tool in their armory. I play Pro Evo or FIFA and I sit next to my friend and commentate all the way through to distract him.”

So to give players that reason to behave and work together, Neate’s team built the megalodon quest around cooperation. And that’s something Rare is going to continue playing with in upcoming events and updates while also introducing other new ways for players to interact with the world.

“So far we brought in the AI threat,” said Neate. “We brought in some small tools – the drum, the speaking trumpet, and the flag system. We brought in new goals around core time limited cosmetics. But what we didn’t do is enrich any of the ways to play the quest stuff. And so as we move on to the next update, okay, what are the things that we can bring in that fill those slots?”

And that’s how Sea of Thieves is going to grow for the foreseeable future. Rare will identify aspects of its game that it can change, improve, or add onto, and then it has four teams working on add-ons that will launch every six-to-eight wees. The Hungering Deep was the start, and now each team moving forward will have even more time to create something new for players.

“The reality of development is that the longer the lead time you give a team to deliver stuff, they’re gonna get more things in,” said Neate. “They get to do better prototyping at the start. They figure that out and then figure out what else they can fit in. Hungering Deep had about seven weeks. Cursed Sails is about 12. Forsaken Shores is 16-17 weeks. You’re going to see more in each update.”

And if each update can continue adding new verbs to Sea of Thieves’ gameplay, Rare may go from successful launch to successful ongoing service.

Here is the full transcript of my interview with Joe Neate:

GamesBeat: Do those numbers mean a lot to you? Or are you just in the nitty-gritty of making sure the game is what you want it to be?

Joe Neate: A mixture of all of the above. With a game as a service, I’m learning to be a mixture of data-led and game intuition-led. My natural state as a human being and as a producer and everything else is experienced, hands-on, touchy feely, but with a game like Sea of Thieves, all the mechanics you can do that with, but how it works out in the wild and how players interact with the mechanics you put out there, it requires a lot of data and feedback and that whole mix.

It’s been fascinating, the transition from launch – and a successful one, if you measure by those metrics up there – to, okay, we had this amazing start, so how do we build on this and double down on it as a team? How do we take the top bits of feedback and react to them? How do we take the asks our players have about new things and new stuff to do and build that in and get it to players as swiftly as we can and in the right way for the game that Sea of Thieves is? It’s an exciting time, and one where I’m learning a fuckton.

GamesBeat: Do you feel like you have the game that can turn into that thing where, in a year from now, you’ll still have people coming in and you’ll keep the people you have now through the next 12 months? Or will you be able to bring them back in with regular updates? Do you think the game is in a position where it could easily grow into that? Do you have all the tools ready?

Joe Neate: 100 percent, yes. That is exactly where I feel we are. We’ve got a game that, broadly, has landed really well with a wide range of players. New IP, 4 million in the first two months. That’s higher now because we’re 10-11 weeks in. The broad consensus from our players is that this is cool, this is unique, we want more. More ingredients in the story, more variety of quests and AI threats and tools what whatever.

We sat down straight after launch, the first couple of weeks—it was mainly stabilizing everything and making sure it worked with the scale of players we had. Then it was, okay, take all the feedback in from all of these players, because we had a lot, right? I’m sure you saw it. Lots of people had an opinion.

But we then kind of sat down, myself and Mike, the design director, and Greg, the creative director, we all sat down and said, what are the top things players are saying? How do we build our road map out from there? Because we had a road map coming into all this, and then we just said—you learn so much from the millions of players playing your game. And so we’ve restructured the team to enable us to deliver content as quickly as we can on a regular basis.

We think for something like Sea of Thieves, having those new fresh things to do all the time, those are really good reasons to come back or stay around, and also good acquisition pieces, for new players, because they say, oh, wow, I wasn’t interested in Sea of Thieves, but now you’ve added this thing. Now you’ve added skeleton ships and AI stuff so I can do a ton of PvE again. We kind of changed our team into three teams now, so that there’s one team worked on delivering The Hungering Deep, one team’s on Cursed Sails, and one team’s on Forsaken Shores. Hungering Deep team delivered, and they’ve moved to the back of the queue. 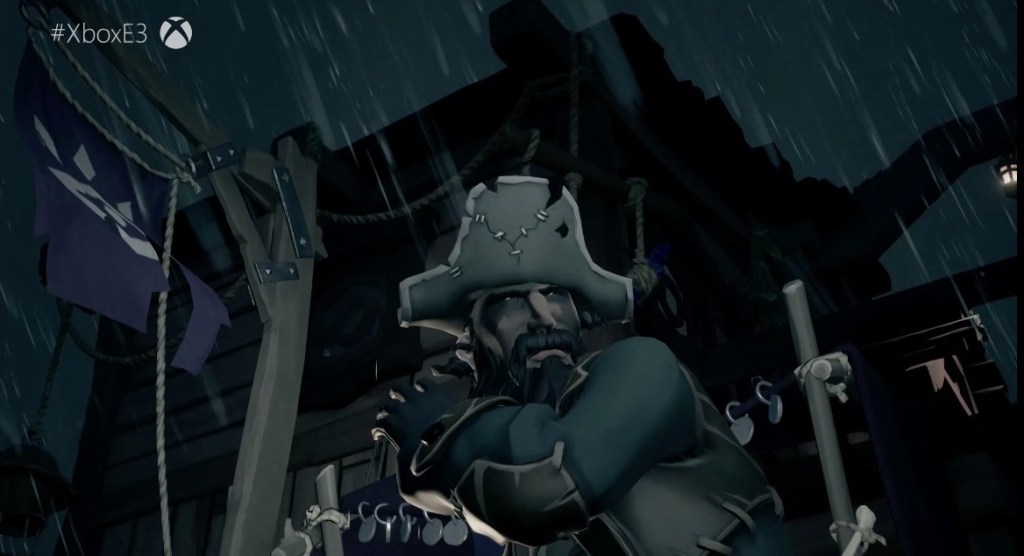 GamesBeat: When you say the upcoming content drops are bigger, what does that mean? More stuff or a wider variety of experiences?

Joe Neate: Both. Ultimately, The Hungering Deep took about seven weeks to deliver what they did. We said, let’s get our first toe in the water of content updates.

GamesBeat: And The Hungering Deep team wasn’t working on this before launch? They were getting the game ready to launch and then fixing problems in the first days after release, right?

Joe Neate: Correct. We’ve all been running toward launch, getting everything in that we could. And then a couple of weeks of stabilization across the team, and then, okay, structure is this. Team, team, team. You guys, we’re going for an AI threat in the world. That’s the main thing we’ll do it around.

But we wanted to bring in this little time limited campaign that had a bit of a — a kind of created quest, with a bit of craft, a bit of lore? To scratch that itch of players who’d like a little bit of story, a little bit of feeling like they’re being led on a journey. We wanted to try that with this campaign, and introduce the new mechanics with it, and see, does that work in our world?

Because we love the emergence of Sea of Thieves, the unexpected nature, but could we introduce a crafted quest that still feels emergent and different for everyone? And also, can we do something that makes player interact with each other differently? Rather than, whenever you see a ship on the horizon you get in a battle, can you get crews to cooperate?