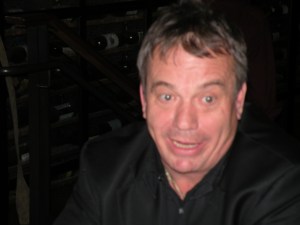 Bill Watkins is always good unplugged. The chief executive of Seagate, the $13 billion Scotts Valley, Calif.-based hard disk drive maker, is trying to avoid commodity mud-wrestling and is trying to develop his own version of chip-based flash memory to replace the low-end of the hard drive market. It’s a tough balancing act to invest in new technology and deal with the worst recession in memory at the same time. We attended a dinner in the spring and caught up with him again recently.

Q: If the economy wasn’t where it is now, what would your position be like?
A: The macroeconomic picture is overwhelming. We had the best year in the company’s history in the year that ended June. Revenue and profits. It was the best year we’ve ever had. And I’m now in the worst December I’ve ever had. This macro problem has basically stopped everything.

Q: The flash memory chip makers have been in a funk since a year ago.
A: Yeah, I’ve been talking to Eli [Harari, chief executive of flash memory chip maker SanDisk] for a long time. Their industry got [itself] way out of whack on over-capacity. In hard drives, people aren’t buying desktops, they aren’t selling notebooks. At retail, external drives are doing OK. We have maybe 45 percent of all desktops with 3.5-inch drives. As desktop drops, where there are three competitors and we have a large share, we are heading to the notebook market where we have six competitors and an 18 percent share. We have to move ourselves to do better in notebook. We have to deal with the transitions from high-end notebooks to low-end notebooks.

Q: Are you doing your own internally developed solid state drives (flash memory chips that function as hard drives)?
A: We are doing it internally. We have two kinds of SSDs. We are spending $80 million to $90 million on SSD technology development. This is actual chip technology. I’m buying chips and developing the technology.

Q: Have you said what the manufacturing strategy will be?
A: We will develop technology and farm it off to the TSMCs or Spansions [contract manufacturers] of the world. If I can’t develop it myself, I’ll buy it. We think about flash the way we think about DRAM. We do silicon development. We design the controller, the firmware, the interface. It will be made by a foundry. Our first games that come out will take a current chip and put it into a drive and controller that we develop.

Q: What kind of technology are you developing for a chip-based memory?
A: We don’t believe in the current technology. The current flash technology doesn’t get to the right storage density and low cost to replace hard drives. SanDisk is doing 3-D chip stacking that they bought with Matrix. Phase shift from Samsung is being developed, but they’ve downplayed it recently. There are MRAM technologies. But we believe there is another solid-state semiconductor technology that needs to be developed that can scale down as needed. We are investors in start-up companies now and we’re working internally on it. If we get that technology, we will have contract manufacturers. I won’t go build massive fabs.

Q: You have a lot of patents on that?
A: Yes. We will wrap it in patents. We were investors in SanDisk. We have been investing in solid-state chips since 1990. Early on, we thought of it as a low-end, low capacity solution. We think now it can be an enterprise tier-zero architecture. Tier zero is where people buy servers and don’t store anything. They just do transactions. They buy high-performance hard drives. They buy fast drives, put 10 of them together for about $3,000. They get 2,000 gigabytes of storage. But they only use a small amount of it. They buy 10 drives, destroke them, meaning you only use the outer part of the disk that is faster. If you came up with a 200-gigabyte drive, the people who need them are like Morgan Stanley. They close at the market close and have all this data that comes in and they move it to the storage. This is five percent of the market, but it is a cost-per-gigabyte play. I replace 10 drives with one with the same speed. I can save them a lot of money. Flash is real, but people are hyping it in the wrong area.

Q: Is it possible for start-ups to make much headway in coming up with a brand new storage technology?
A: It’s worth noting that Samsung has to pay a lot of money in license fees to SanDisk, which was once a small company. All it takes is four smart people who know how to do something and they go up against 200 average people who don’t know how to do crap. [Laughs]. This valley was started on people who are smart enough to beat big companies. We are investing with start-ups because doing it myself takes way too much crap. Doing it with a start-up keeps the crap off my plate. We do creative stuff with a joint venture because they can do it much more efficiently. I’ve spent time with solar start-ups. There are 70 in the Bay Area. I’m just helping them out as part of the Silicon Valley Leadership Group. It will help me. When they come out, they will need hard drives too.

Q: If you look at something like MRAM, it’s been in the labs so long that it’s hard for them to catch up with the market leaders. They can’t run fast enough, right?
A: That’s true, although I see MRAM more as a competitor to DRAM chips, not hard drives. I don’t underestimate start-ups.

Q: What’s going on with Eco Seagate (where the company sends its employees through a grueling survival course in New Zealand) this year?
A: I probably won’t be able to pull it off this year. I don’t want to spend the money. I pulled it out one other time in 2000 because of finances. If we’re making money, we’re going to do it.

Q: You’re not expecting a great year?
A: No. I’m hoping it comes back faster. We’re prepared for a bad two quarters coming up. If we think there is a big inventory problem, we’re going to make sure that we’re in better shape. Right now, we’ve probably got capacity to make 40 percent more drives than we’re going to ship. Maybe we’re at 70 percent capacity. I think there will be an inventory issue with the PC guys before this quarter is out. It shouldn’t be this high right now. It might make for a lousy January.

Q: But it’s still not as bad as 2001.
A: Yeah. But our numbers are a whole lot bigger now. When you have this netbooks trend going, it’s causing a lot of consternation for everybody. The netbooks are just low-cost laptops. Intel makes a profit. No one else is. It’s killing the business for the others. It’s like a $#!+-eating contest. The only question about a $#!+-eating contest is you don’t know whether it’s better to eat more $#!+ or eat less $#!+. Who wins in the end? Is the winner the guy who eats the most $#!+?

Q: What was the $#!+ referring to again?
A: We’re referring to the low-cost netbooks. It was going to be a flash-based technology that dominated netbooks. About 90 percent of it is hard drives. A lot of them are big drives. The screen sizes are up to 11 inches. The rest of us are selling low-cost notebook components. We want to sell the high-performance notebooks. We want to push the market to higher RPM on the hard drives.

Q: Downloading movies helps you sell drives. How is that proceeding?
A: One big change I’ve seen in the last six months is that Hollywood has gotten on board with downloading of movies into the home. We’ve seen a big change in how they’re talking about things. They are figuring out how they can make money.

Q: Do you think the government should be investing more in critical technologies, such as cleantech or other things?
A: We have to make sure that we don’t let all of our technology go offshore. I’ve said that before and I just get in trouble for saying that. I think there has to be strategic investment that fundamentally preserves our technology related to information. Every one of us would go in and ask for subsidies. The problem is, how do you manage all of this. I came out with an encrypted drive. Every country in the world wanted me to put a back door into it [for security eavesdropping]. We refused. It’s not a secure drive if it has a back door. Now do you want that kind of technology designed by someone else? These are the issues we will have as the world goes on.