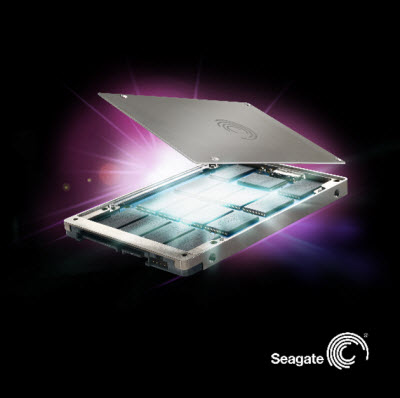 Seagate makes about $10 billion a year in revenues from its 30-year-old hard drive business. But today, after two years of study, the company is launching a new flash memory storage business. That represents one of the most significant expansions for the company in years.

Instead of mechanical hard drives, the new Seagate Pulsar enterprise solid state drives (SSD) devices use flash memory chips to store data. While big players such as Samsung, Stec and others have been making SSDs for a while, this is Seagate’s first big push into the market. Gartner estimates this market will double in 2010 to $1 billion.

Dave Mosley, executive vice president at Seagate, said that the company is focusing on the high-end storage market that shares common threads with Seagate’s hard drive business. The company is building the 2.5-inch Pulsar drives, which can store up to 200 gigabytes, to store data in enterprise computers, such as data center servers and blades, where energy efficiency is a top priority.

The move means that Seagate isn’t religious about hard drives; rather, it is focused on the storage market, regardless of technology. It’s a hedge strategy, as it diversifies the hard drive maker into a part of the market that could eat away at its core business.

While flash-based devices are still more expensive in a cost-per-megabyte measure, they are about 50 percent more efficient, Mosley said. But SSDs have an advantage over hard drives in the fast reading or writing of data. Seagate’s devices can read data at 30,000 operations per second and write data at 25,000 operations per second. That’s about 100 times faster than a hard drive. Because of these kinds of speeds, Seagate already uses flash chips in its hard drive products, mostly as buffers for temporary storage of a small amount of data that must be accessed quickly.

This doesn’t mean that Seagate is giving up on hard disks, as the devices with rotating disks still dominate in about 93 percent of the overall storage market, accounting for 10.6 exabytes of storage. An exabyte is, um, a very big number: a billion gigabytes. So far, SSDs have been expanding the market, getting into the lightest netbooks, which are smaller than laptops and are meant for surfing the web. But Seagate’s move shows that flash can also be useful in servers.

The company is focused on single-layer cells, meaning it doesn’t stack the storage cells vertically as Intel and others do. That’s because the company wants to focus on the highest-reliability technology, rather than the most dense. Using its own chip design, Seagate has created a flash device that won’t lose data if power is suddenly cut off. The company began shipping the Pulsar units in volume in September.

While Seagate may seem late compared to its rivals, Mosley says the market is nascent and that it will continue to add more flash products over time when the market is ready. Intel and Hitachi are also working on a similar product but haven’t shipped anything yet in the enterprise SSD market.