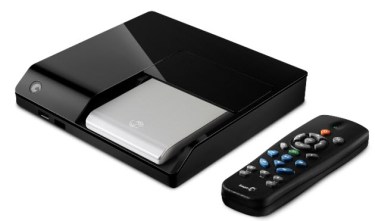 After an unsuccessful attempt last spring, Seagate is launching a new and improved version of its backup device that lets you play your computer’s videos and pictures on a living room TV.

The FreeAgent Theater + HD Movie Player is a revamped device that is now much more like an entertainment device than an external hard drive backup device. It comes with an HDMI connector that makes it easier to connect the device to a flat panel TV. The software is also smarter.

The basics are the same as last spring’s semi-successful model. You take a FreeAgent Go backup drive and connect it via a universal serial bus port to a computer. You drag and drop photos, music, and videos onto the backup drive and it begins transferring the files. Next, you plug the FreeAgent Go drive into a dock on the player. The player then displays the slide shows or movies on your TV set via the HDMI connection. (The HDMI cable is sold separately.)

You can access the media on the drive via a TV-like remote control. Navigating through the folders is so easy that Seagate vice president Jon Van Bronkhorst says his 75-year-old mother can do it. You can play entire folders as slide shows, and you can add a soundtrack easily. The photos and videos can be displayed in full high-definition, or 1080p. There are two other USB ports on the dock so you can connect multiple storage devices. It doesn’t play web-based movies, unless you’ve downloaded them to a computer hard drive, and it doesn’t play DVD movies. It’s all about letting you access your own home movies that you’ve recorded with a camcorder or digital camera.

You can also connect the dock via an Ethernet cable to your home network router. Then you can view the media stored on all of the different media in your home. The player supports a wide array of video and audio formats. In October, Seagate plans to launch a $69 wireless adapter that lets you use your Wi-Fi connection to browse the media on your home network. You can play your whole music collection using high-quality digital audio formats such as Dolby Digital technology. It works with both PCs and Macs.

Van Bronkhorst said last March’s model was designed for the European market where the requirements were different. This new model has been created with U.S. consumers in mind.

“It’s one of the categories where we have a lot of education work to do,” he said.

Seagate competes with rivals such as Netgear and Western Digital. But the real enemy is consumer apathy. Some people still don’t want to deal with the hassles of connecting computer devices to their TVs. We’ll see if Seagate has really made it easy enough to do this time.

The player is available at Seagate.com and other online retailers. Without a storage device, it costs $149.99. If you buy it bundled with a 500 gigabyte FreeAgent Go drive, it costs $289.99.