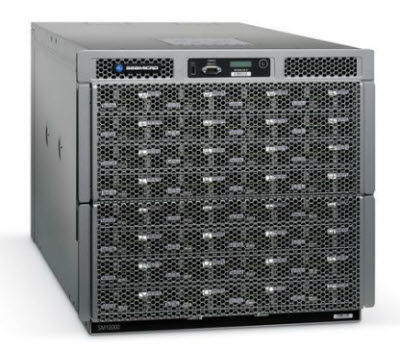 The new Xeon-based SeaMicro SM10000-XE micro server uses half the power and a third of the space of previous servers. It can also handle heavyweight workloads for data center computing.

“This is an important step forward in servers, the mainstreaming of the micro server,” said Andrew Feldman (pictured at bottom), chief executive of SeaMicro. “This is the most energy-efficient Xeon server ever built.”

SeaMicro will use Intel Xeon processors in a “micro server” in partnership with Intel and Samsung. Previously, SeaMicro used low-cost, low-power Atom microprocessors in its micro servers.

“All of Amazon could run on 20 of these for its first four years of existence,” Feldman said. 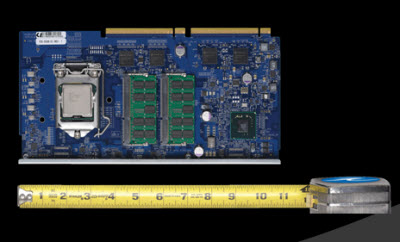 SeaMicro’s server boards (pictured right) use only a processor, memory, and a SeaMicro custom chip. That eliminates about 90 percent of the components on a motherboard. That allows the company to shrink the board to either the size of a business card or half the size of a piece of binder paper. They replace the huge servers as pictured below.

Jason Waxman, general manager of the data center business at Intel, said that the micro servers play a role in covering the full spectrum of needs for customers in the data center. In this case, SeaMicro can now offer more performance per core, or computing brain, using the Xeon chips. 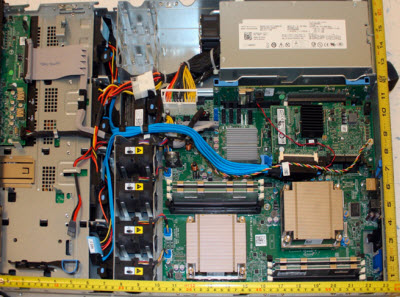 The SM10000-XE uses quad-core, 2.4-gigahertz Xeon E3-1260L chips and power-efficient Samsung dynamic random access memory (Green DDR3). The Samsung chips use 72 percent less power than DDR3 memory chips. The SeaMicro machine will cost $138,000 for a base machine, which has 64 quad-core Xeon processors. The system has 256 cores in a rack of 10 servers, with 10 gigabits per second bandwidth to each processor.

Overall, it has 12 times the bandwidth of other computers. SeaMicro integrates a bunch of chips into its Freedom Fabric custom chip, allowing for more efficient use of computing power. As a result, it has plenty of power to handle brawny computing tasks. Systems are shipping today. 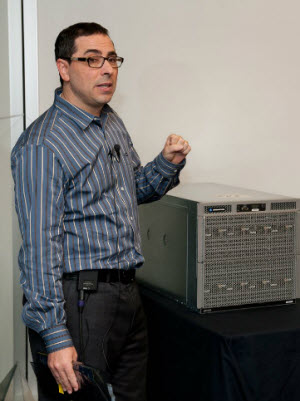 Jim Elliot, vice president of marketing at Samsung Semiconductor, said that data traffic is growing at a compound annual growth rate of 30 percent and that is driving demand for DRAM by six-fold. Data centers now consume 23 percent of computing power. To deal with that, chip makers are lowering the voltage levels and overall power consumption of chips, while system makers such as SeaMicro are designing servers to take up as little space as possible.

“We see a greening of the data center as a journey and not a destination,” Elliot said.

SeaMicro’s customers include Skype and Dell.