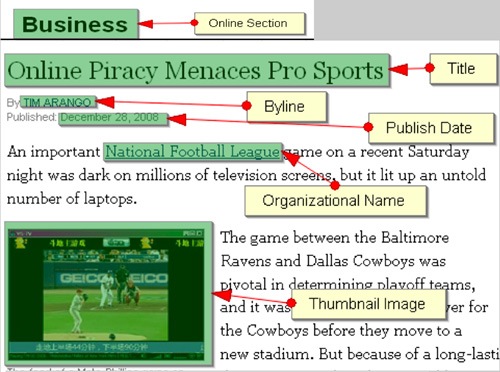 The New York Times has been exposing more data to external websites and applications recently, and now it’s providing the most promising access of all: the ability to search the Times’ entire online article archive going back to 1981.

The Times is doing so through application programming interfaces (APIs), which let third-party company developers access the data easily.

I was already impressed by attempts to share campaign finance data, other relevant information about Congress, and fun stuff like movie reviews, but the new API unlocks the most valuable thing The Times has to offer — 2.8 million articles. You can search 35 separate fields, including title, publication data, byline, and organizations mentioned.

Of course, APIs are only valuable if developers are using them in interesting ways. I haven’t seen too many sites or applications using the Times APIs yet, though I haven’t looked too hard. I’m betting the Article Search API will see more use than any of the others — adding access to this content would be a great addition to news or reference sites. And compared to, say, campaign finance data, article searches seem like a much more compelling way to draw readers back to The Times’ site.

What’s less clear is how The Times plans to make money from these APIs. After all, there has been plenty of speculation about the paper’s finances, and editor Bill Keller has been openly discussing the possibility of charging for certain kinds of content. For now, there’s no charge to access the data, although the terms of service do leave the possibility open. I certainly think the Article Search API is something the Times could charge for — to my mind, the archive (not the columns) was what I was really paying for when I signed up for the abortive Times Select online subscription service.

By the way, The Times’ APIs were built by a San Francisco startup called Mashery. [Update: I was wrong. Mashery handles some of the infrastructure behind the APIs, namely the traffic throttling and key generation, but the APIs themselves were built by Times developers.] I had a chance to talk to Mashery chief executive Oren Michels last month, and he said the standard method for making money from APIs is to draw users back to the site. However, from what I hear, The Times’ problems (and the problems at most newspapers) have less to do with traffic and more to do with making money from existing visitors and ads. Michels argued that APIs are a good funnel for potential paying customers, too — among Mashery customers, Thomson Reuters’ Open Calais initiative is an example of this. Even with in the downturn, more and more companies are interested in opening themselves up through APIs, Michels said.

“In a recession or a depression, you can’t ignore things that create new distribution channels,” he said.

Anyway, it’s still early to judge The Times’ initiative. Let’s see what the paper does with its coolest API yet — for now, I’m just glad this is available. The Times’ post announcing the API begins, “Finally!” which captures my feelings exactly.