[Update: See our subsequent post here, which includes a deeper look, after Search Wikia gets slammed by other initial reviews]

The search engine has been highly anticipated for its unique, open-source approach to search as well as its high profile founder, Jimmy Wales (pictured here), who has led online encyclopedia coverage).

We spoke with Wales under embargo last week about his plans.

This time, Search Wikia is a for-profit endeavor, part of Wikia, another company Wales co-founded. And it’s going after the biggest search engine of them all, Google.

According to Wales, Search Wikia’s primary innovation will be to tie a user’s social network – that is, information about the user and their friends – into search results. The idea is that a user and their friends share a common set of preferences and that using that information makes search results more personalized as well as more relevant. More on that in a second.

Here’s how it works: Users will see a familiar search interface (see screenshot below; I tried a search for “Warner Blu Ray,” looking for what Search Wikia has for results about Warner’s defection into the Blu Ray camp).

The twist, however, is that they can begin to shape the results without even registering for the service. First, users can influence search results by editing a Wiki section that appears at the top of each results page (see left red arrow below). This section is likely to be very similar to Google “OneBox” or Ask’s “Smart Answers” – a specially marked section at the top of the page that answers the user’s query without necessarily showing search results. 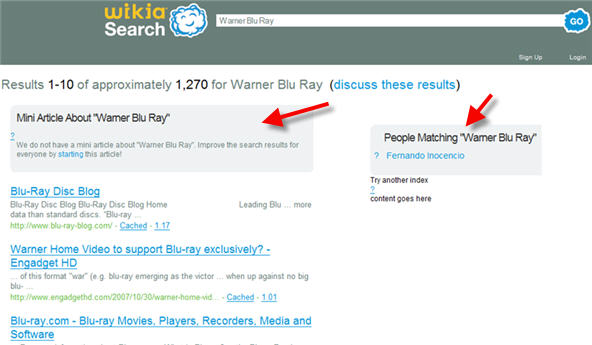 While Google’s Onebox is created algorithmically based upon the query (screenshot below), Search Wikia’s wiki results will rely upon its users – you and me – to edit the section. Since all search engines allocate a great premium to the first result, Search Wikia is effectively allowing its users to collectively control the most important result on the page. Search Wikia will use unregistered users’ IP addresses as a track record of such edits to prevent spammers from manipulating the section for irrelevant or malicious content. 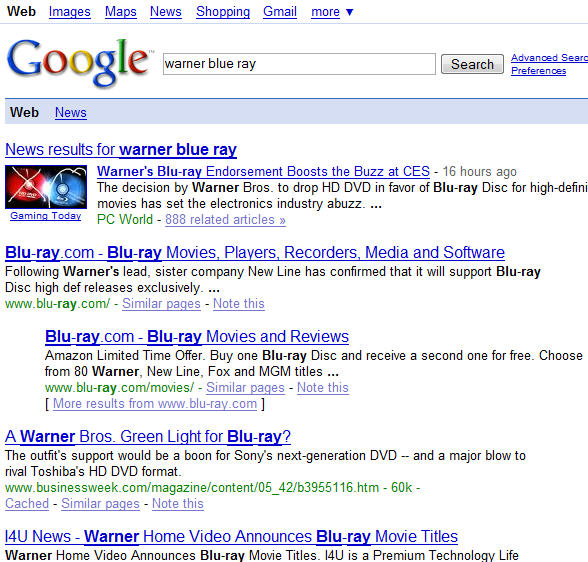 Similar to Digg, Search Wikia will also allow all users (including unregistered users) to vote upon individual results using 1-5 stars, and to flag results that the user finds inappropriate or irrelevant to the query. Wales said that in the near term, the service will not yet use the voting to influence actual results. The current plan is to simply view user behavior first, collect data about that behavior and find the most appropriate way to feed these votes back into the search engine’s ranking algorithms, he explained. Search Wikia certainly won’t be the first to try this since Google Labs recently ran an almost identical experiment for users with a Google account (screenshot below).

Digg has had great success with its model of allowing users to propel the best stories to the front page, but it has also had to deal with spammers creating dummy accounts to artificially boost a story’s rank. Search Wikia plans to solve this problem by recording all clicks as public acts and using IP addresses or usernames to create a trail of actions. Wales also referred to Search Wikia’s reliance on a hybrid of algorithms and human intervention – as opposed to Digg’s complete reliance on user votes – as a way to eliminate the problem.

In addition to a search engine, Search Wikia will launch — also Monday — a full featured social network. Users that sign up for the social network (again, by registering) will have a profile page and the ability to befriend and message other users. At some point, we assume that a particular user’s search results will be influenced by the votes of the user’s friends within the Search Wikia social network. This approach to search is referred to as “social search” and other companies have tried their hand at it with limited success. Eurekster launched a search service in 2004 that ranks and re-orders search results based upon a user’s friends’ clicks. Today, Eurekster does not have a destination search site; instead, it builds social search into popular blogs and small websites. We tried a newsworthy technology query on TechCrunch’s site, which uses Eurekster search, and found that the results didn’t reflect our intended search — we wanted news about Warner’s defection into the Blu-ray camp (screenshot below). Yahoo! My Web, which launched in 2005, is also an attempt at social search – it allows users to bookmark particular results as well as invite their friends to be able to use their bookmarks for relevant results. While the service is still around, it has not been integrated into mainstream Yahoo! Search.

Wales has also held talks with Google Developer Advocate Kevin Marks, one of the evangelists behind Google’s OpenSocial initiative. Search Wikia will support OpenSocial, allowing developers that build social applications for Google’s Orkut or LinkedIn to easily run same applications within the Search Wikia social network. Since some of the OpenSocial APIs are as yet , look for this part of the service to evolve over time. 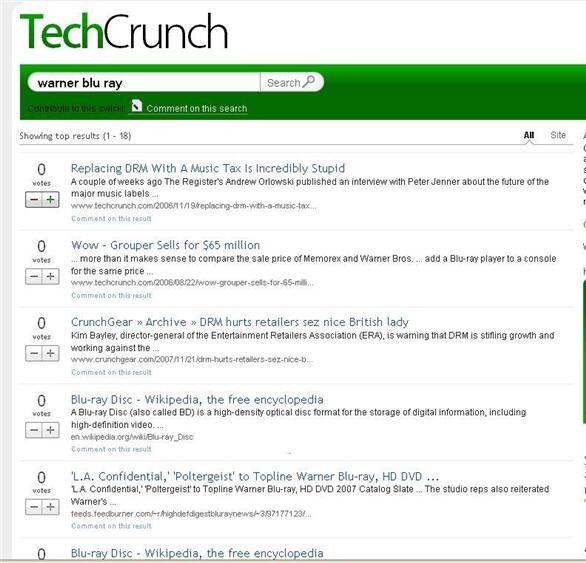 Many new search engines also license search results from the major engines when they have no results to show for a particular query. Here is an example of Mahalo showing Yahoo and Google results because there isn’t a Mahalo page for the term. However, Wales confirmed that Search Wikia is not currently involved in discussions with third party search engines. He also confirmed that the service is currently performing a deep crawl of Wikipedia and that results from Wikipedia were likely to rank high in the beginning. Given these details and an index size between 50 and 100 million pages – compared to a Google index that is rumored to be well north to 40 billion pages, it is safe to say that it will be quite some time before Search Wikia can truly be a general purpose search engine. In the meanwhile, Search Wikia hopes that its approach to crawling the web – by using volunteers that download a desktop client software called Grub – will allow it to build a comprehensive index in a relatively short period of time.