Most consumer 3D printers use “ink” made of colored plastic line.

But despite the self-reliant and Earth-friendly bent of many 3D printing hobbyists, it’s surprisingly difficult to find 3D printing line, or filament, that’s made of recycled plastic — even thought the type of plastic used, ABS plastic, is easily recyclable from old plastic bottles.

Now a Seattle-based entrepreneur, Liz Havlin, aims to change that with a machine that turns recycled plastic into filament suitable for loading into any mainstream 3D printer.

Interestingly, the machine she’s building — which she calls the Legacy — is itself built using 3D printed parts. Designed by a Seattle experimenter named Hugh Lyman, the Legacy can be built with about $250 in parts. Together they are creating an open-source design that anyone can use to create their own desktop plastic recycling plant.

It’s not the first project aimed at making 3D printer filament into a cottage industry. Make magazine had a how-to on making your own 3D filament using an extruder called the Filabot recently. And the Filamaker is a filament-extruding machine that started as a DIY project and is now turning into a commercial device that will be available for about $680. But Havlin’s project seems unique in its combination of local ecosystem outreach, global ambition, and focus on recycling.

It also seems aimed at people who want to use recycled plastic with a minimum of fuss and maximum of convenience. 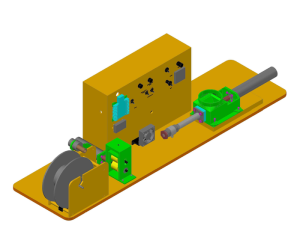 Above: Hugh Lyman’s plastic extruder design is the basis for the Legacy 3D filament machine.

“Legacy is based on Lyman’s design and includes a self-winding filament spool apparatus so when you have the amount of filament you need for your project, you simply snip the end and put the spool on your 3D printer,” Havlin’s Kickstarter site says.

At the same time, she’s setting up a Seattle-area business to turn recycled plastic into filament. She’s working with a local center that provides employment for people with developmental disabilities, so with luck, her business will help provide jobs for people who have trouble finding work otherwise.

And she’ll be sending her Legacy plastic extruder to India in a few months to help explore the possibilities for creating a worldwide recycling movement that’s based on these small machines.

She’s working with The Plastic Bank, a Canada-based plastic waste stream processor, to make this into a licensable model, so companies that want to do the same thing can license the right to use the Legacy machine and produce their own “social plastic” or “ethical trade filament.”

“Don’t you love Open Source?” Havlin wrote to me. “Instead of DIY we can do it together!”

So far, Havlin has reached the prototype stage, and she’s preparing a Kickstarter project that she hopes will raise the $30,000 she needs to take the project to the next level. She’s done tests with ground-up plastic scraps, and while the machine was able to melt them down into filament, the results weren’t quite consistent enough. So instead, she’s arranged a trade with a local business that will exchange recyclable bottles and other plastics for plastic pellets made of those recyclables.

When it’s fully up and running, the business will be able to collect plastics, exchange them for pellets, and use the pellets to produce ABS filament that it will sell to Seattle-area 3D hobbyists.

Havlin says she got into 3D printing when she was trying to get prototypes made for a patented hair accessory she invented.

“My passion for 3D printing comes from the belief that manufacturing makes jobs,” she wrote me.

“And its super frustrating trying to get one of anything made.