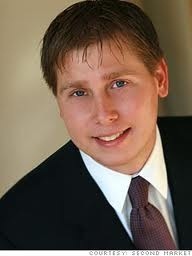 Bankers and brokers nibbled on spinach omelettes, looking out over a sumptuous view of midtown Manhattan, at a private breakfast thrown by Bloomberg Markets on the 29th floor of its Lexington Avenue building. Barry Silbert, the baby faced founder and CEO of SecondMarket, which facilitates trades in private tech companies, took questions from the crowd. VentureBeat was one of only two news outlets at the event.

“Facebook is the elephant in the room, no doubt about that,” Silbert said of the social network, which is expected to IPO as early as May. “It represents a significant portion of our revenue, so we will have a big hole to fill.”

Right now, SecondMarket is holding weekly auctions on Facebook stock to meet the extreme demand for shares, says Silbert. The company’s public offering is seen by many as a test of the eye-popping $100 billion valuation the social network has reportedly reached on the private markets. But Silbert didn’t see a long term future for SecondMarket as a stepping stone to an IPO.

“The IPO market is dying,” he said. “You see companies achieving robust valuations on the private market but being treated poorly when they go public.” (We’re looking at you, Groupon and Zynga.)

“Often there are factors like the credit crisis or the situation in Europe affecting the markets. It’s the reasons entrepreneurs like myself never want to go public.”

The longer companies stay private, of course, the better for Silbert’s business. If an IPO isn’t the ultimate goal for a venture-backed startup, then what is, Venturebeat asked. Aside from being bought out by a bigger company, how can you provide an exit that satisfies venture capitalists hoping for big returns? “We want to create a market where anyone who is a 20 percent holder of a company with a valuation of $150 million or more can get liquidity on their investment within two years,” replied Silbert.

His vision is a re-invention of the small-cap IPO that might be music to the ears of venture capital funds backing tech companies. It now takes an average of 10 years to get a company to IPO, and there are fewer and fewer going public below the $1 billion mark. SecondMarket aims to be a third-route venture backed startups could pursue for an exit if IPO and M&A don’t make sense.

“We have the world’s best Rolodex, a network of 85,000 investors, we can match with opportunities,” Silbert said. “We started at the very top with these outliers like Facebook and Twitter, but the aim is to work our way down to much less high profile companies.”

New legislation currently being considered in Washington D.C. would expand the number of shareholders a private company can have and lift the ban on general solicitation, allowing SecondMarket to more aggressively promote the companies trading on its platform.

“We are looking to make a market that fits each company. No high frequency trading or flash crashes, none of that crap,” said Silbert. “We want to connect companies with patient, long-term capital that makes the most sense as they grow their business.”