As 2010 comes to a close, social news aggregator Reddit.com is celebrating another success in what has been a year full of them.

A “secret santa” program created by Reddit users expanded to more than four times the size of what it started at last year. More than 17,000 Reddit users from 90 countries are exchanging gifts. That’s an example of how Reddit is flexible enough to allow users to expand and engage the community in surprising ways — a must for any social site that wants to remain at the top of the list for its users. Judging by its growing user numbers, Reddit is doing a great job at it.

Reddit community manager Erik Martin said,”Like it often does at Reddit, the idea came from a user. He’s a programmer in the Bay Area and he put the idea out there and got a really big response. He wrote redditgifts.com in one night.”

The service matches anyone interested in giving gifts with a random Reddit user. In many cases people have to figure out for themselves what to get their secret santa.

“What people really like about it I think is that it’s fun detective work to figure out what people would like,” Martin said. “When you sign up you can say what you like or don’t, but many people don’t say either way. So often you have to look at what their secret santa has commented in the past to get an idea of their interests and therefore what present they might like.”

The holiday program is an example of the explosion in popularity of Reddit in 2010. At the beginning of the year the site had roughly 32 million visits a month and more than 327 million page views. That skyrocketed to more than 62 million visits per month and more than 836 million page views by the end of November. Those may not even be the most impressive stats however. The time spent on the site per visit rose from roughly 13 minutes at the beginning of the year to 15:20 currently. It is almost unheard of for a mature site growing that rapidly to see increases in time spent per visit. “That’s something we’re really proud of because as more new people come in, you often see time spent on the site go down, but we’re seeing it go up. It means they are becoming part of the community.”

Reddit has struggled at times to handle the growth. Users have complained in recent months about being unable to access the site during the day at times. Server issues were the culprit. With so many comments, up votes, submissions and other data pouring in, it’s become a challenge to handle it all. “Running Reddit is a race between our systems and our traffic growth,” Reddit’s Mike Schiraldi said. “As long as we stay one step ahead of the traffic, it’s smooth sailing. But our traffic has surged to overtake us this winter, and so we’re dramatically increasing the size of our engineering team (by two). Of course, since it’s currently four people, that’s not saying much. Once the new guys are spun up, things should get better.”

Part of this growth is attributed to collapse of the community over at competitor site Digg.com. Fans of that news aggregator fled to Reddit in droves after Digg failed at its attempt to redesign the site and change the way users navigate it in late August. Digg eventually laid off more than 37 percent of its staff. Stories that hit the front page on Digg soon stopped bringing nearly as many referrals as they once did, according to many publishers that worked with the site. This lead to more buzz and additional advertising on Reddit.

“(Digg’s troubles) really helped us a lot in terms of perception,” Martin said. “It was a situation where media advertisers didn’t think of Reddit. They appreciated Reddit a lot more after the Digg decline. They use to kind of lump us in with all the others. Now not so much.” 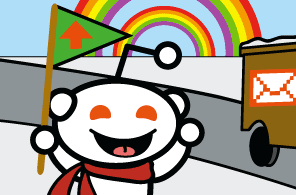 Microsoft is one of the advertisers that came to Reddit and is now engaging in conversation with community members. In September, developers of Internet Explorer 9 discussed that new product. This month, Hotmail team members spoke to the community by posting an “ask-me-anything” thread, where users could come in and ask questions about the service and get feedback from the Hotmail team. Some Hotmail team members were even criticized by Reddit users for not speaking frankly about shortcomings of their product.

Meanwhile, a different advertiser, Opera, had a more positive interaction. “They spoke to Reddit users in their own language,” Martin said. “They ran an ad recently that had a nice luscious shot of some bacon. Opera saw some feedback from the vegan Reddit community. They were complaining. Within an hour they made a new version of an ad that had some really nice looking vegetables. That goes a long way because people, even if they don’t care one way or the other, notice that Opera was really listening and responsive. I wish that lesson was more widely adopted.”

Ads from big companies have appeared before on Reddit, usually in the form of broader campaigns for Cisco, Amazon.com and others sold by Condé Nast, the publishing giant that owns Reddit. Martin says the site also runs sponsored headlines which users themselves and companies can buy. “Many of the ads are in the same vernacular as the content, and people can comment on them. They give feedback and have suggestions. They give the advertisers a chance to respond. More traditional banner ads are there, but people can comment and respond to them too. With all the traffic growth and all the new things we’re doing it’s been a lot of work but it’s definitely a good year for us financially.”

The site also began its “Reddit Gold” program this year, which lets people who wish to donate to the site have a private “subreddit” to hang out in. Martin says the money from those donations has helped to pay for their two new engineering hires. 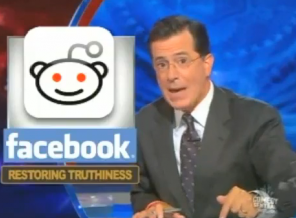 Another important reason for the rise of Reddit in 2010 was the growth in number and size of new communities on the site. “The ability for users to create new sections of the site allows both new and especially longtime redditors to experience something new,” said Martin. “Some of the bigger and more popular new groups include ‘iama,’ in which people talk about their jobs, ‘colbertrally,’ and the new ‘secretsanta.’ There is also one new community in which favors are done, such as when someone needs help proofreading a thesis, or Photoshop work.”

The growth of these communities has sparked a level of altruism that isn’t often seen on the Internet. Martin cites one instance in which military veteran William Lashua received hundreds of gifts from Reddit community members who were concerned he might not be receiving appreciation on his 90th birthday. “His grandson is actually a redditor,” Martin said. “He was very happy and said it was amazing. He also said that he wasn’t lonely and that he had lots of family with him. It became a very positive thing because it created an opportunity to tell people to go their local [Veterans Administration facility] and show appreciation to other veterans, which they then did.”

This type of thing had always been around on the Internet before, but perhaps had been more limited to message boards and individual communities. “Reddit is a collection of independent communities, so each one gets larger exposure,” Martin said. “It just shows how speed is a big part of it. These stories can grow really fast on Reddit, and with a larger audience this year, it makes it exciting for people to participate. That’s how it happened with the Colbert Rally. It’s all for its own reward, but since it’s happening in front of millions of people online it lets people not just help out for a good cause but to be part of something, be a part of the story.”

Reddit has about 10 employees. It has staff in San Francisco, New York, Salt Lake City and Los Angeles.