The site, near Sarnia in Ontario, Canada, will be enough to power between 10,000 and 15,000 homes on sunny days, drawing on a monstrous 40-megawatt capacity. The company, called OptiSolar, is backed by private equity firms apparently with oil connections. It has studiously avoided saying anything until this announcement.

The deal is significant, not merely for its size, but because it was scooped by such an unknown company. Why wasn’t public company SunPower in the mix, for example? One clue is OptiSolar’s model, which does soup to nuts, unlike most others. It does everything, from manufacturing the solar cells to generating the power on-site and then selling the power through the regional grid. Usually, the manufacturing and sales processes are separate. It also uses thin-film silicon technology, which gives it an advantage because it uses less amounts of expensive silicon.

This breakthrough deal raises questions about the progress of other start-ups, such as Nanosolar and Miasole, that have gained buzz for dispensing with traditional use of silicon, in favor of a more flexible material called CIGS. Most of these have yet to announce any deals, though we’ve heard some are in the works. Their solar ink can be printed and distributed easier than can bulkier silicon panels. Several of these start-ups have been working away for at least as long as OptiSolar; one question remains how efficient their solar cells are.

The Ontario Power Authority has purchased electricity from the company under a 20-year contract. The world’s largest farm is the 12-megawatt Erlasee solar park in Germany (image below left courtesy of the Toronto Star and Daniel Karmann, shows what these farms look like). The OptiSolar farm will stretch across nearly 365 hectares, and estimates are that the cells cost at least $300 million to product, according to the Star. OptiSolar chose Ontario because of the subsidies if offered. If all goes according to plan, the farm will be up and running by 2010. 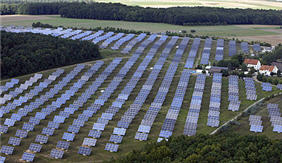 The company’s solar cells will be built at a plant being constructed in Hayward, we’ve confirmed. OptiSolar, a two-year-old company formerly known as Gen 3 Solar, recently moved to more than double its 33,406 square foot space at an industrial part of south Hayward.

The company has also agreed to build a large project outside of Detroit.

Even as the nation’s Environmental Protection Agency remains cowed and inactive, various solar projects are surging forward. Kohl’s just announced it will convert most of its California department stores to solar power starting next month.

We’re seeing job listings for this OptiSolar, which suggest it is using sputtering technology of some kind and laser scribing, perhaps on glass. We’ve listed them below (sorry, not very pretty):